Back in March of last year, Stephen Wolfram wrote a blog post, The Personal Analytics of My Life. It’s a fascinating look at the data he’s accumulated over years about his own personal activities and habits such as daily incoming and outgoing email.

Since I read that, I’ve been fascinated about the idea of how personal data analytics might prove useful to me. It turns out I found an application to my health.

In my series on The Real Pain of Software Development (part1 and part2), I talked about my history with pain related to work and the various measures I took to remedy that pain including intense physical and occupational therapy.

I neglected to mention was how much difference a bit of weight loss makes. A single pound reduces the force on your joints, back, and other muscles an immense amount over the course of a day, week, or years. I am now more aware of how much pain I feel ebbs and flows as my weight does.

Sometime last year, GitHub gave all of us a Fitbit. It’s a little device that tracks the number of steps you take during the day. It can also track vertical distance changes and if you’re diligent, how much sleep you get. It posts all the data online so you can take a look at your numbers and compare to friends.

It wasn’t long before my co-workers hooked it up to Hubot (just another example of how chat is important to us and is at the center of how we work). Here’s a screenshot of the /fitbit me command which shows the leaderboards for step counts in the past 7 days. I blocked out names for privacy reasons, though I bet the top four would love to be unredacted. 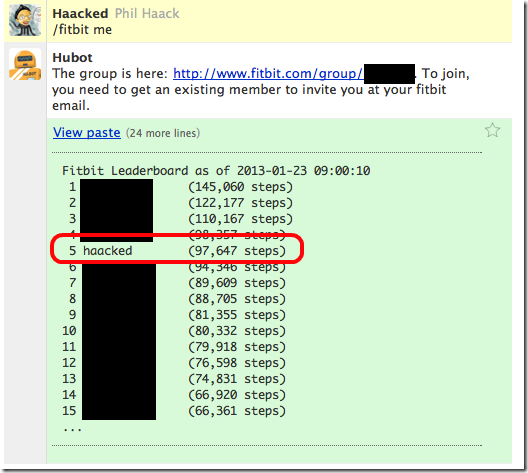 What I love about this is it adds an element of friendly competition to the mix. There’s absolutely NOTHING riding on this other than pride. Yet, it’s amazing how motivating this is. I now take a long walk to get coffee every day because I want to be up there near the top. And there’s no downsides to that. Maybe it’s the wrong motivation, but it’s definitely the right result. The evidence for this result is in the following.

I also happened to purchase the FitBit Aria Wi-Fi scale because I love me them stats. As you can see from the graph, the /fitbit me motivation is effective.

Unfortunately, I injured my knee snowboarding a couple weeks ago and have been sick the past few days so it’s starting to trend slightly up. But since I’ve had the scale, I’ve lost 6.3 lbs overall. This isn’t only due to the FitBit. We recently started a single subscription to BistroMD to supplement our cooking efforts since we both work and I work from home. I’ve found portion control a lot easier when it’s controlled for you.

FitBit can also track sleep, but this is not as automatic as step counting. You have to remember to wear it at night and put it in sleep mode. It’s a bit high maintenance.

Also, it seems to count nights that you forget to set it as a day with 0 hours of sleep, which is not really what I want. Based on this graph you might incorrectly assume I averaged from 3 to 6 hours of sleep a night over the past year. Clearly that’s not correct or I’d be a raging hallucinatory lunatic by now. I know, some of you think I am such a beast, but if so it’s for other reasons, not due to lack of sleep.

I hope to be more diligently track my sleep patterns this year to see if there are any interesting correlations between the amount of sleep I get, my fitness level, my mood, and my GitHub contributions graph. Heh.

I’d love to see a graph of my steps over the year in fine detail.

Speaking of step counts, see that big spike in January, that’s the GitHub Winter Summit, our all company meeting in San Francisco. The way that spikes might give you the impression that we’re all health freaks and the summit is a very physical endeavor. Well, maybe.

The following is a breakdown of one of a couple of those days.

Notice the hours of the big spikes. Yeah, we like to dance late at night.

Notice the big midday bump on the second day? That was a scavenger hunt that took us all around the great city of San Francisco.

All in all, I’m pretty happy with the FitBit and like how the data driven lifestyle it encourages has been a net positive for me. Your mileage may vary of course.

Some downsides to the FitBit is that it’s easy to lose. It’s easy to forget about it and launder it. It’s somewhat easy to break. Mine’s survived so far, but not without a chip or two. Also, it requires charging almost every day or at least every other day. Also, I’m not aware of a way to get the absolute raw data even with the premium account.

I’d be willing to pay money to get the raw data and create my own graphs. FitBit isn’t the only personal fitness tracker out there, but it’s the only one I’ve tried and I’m a big fan. I wouldn’t mind trying others, but much like the network effects of other social networks, the fact that many of my friends and co-workers are all on FitBit will keep me tied to it for now.

UPDATE: Looks like there is a FitBit API. I’ll have to play around with it. Thanks to @geeksmeetgirl for pointing it out to me.