TRIPLE UPDATE! C# now has string interpolation which pretty much makes this post unnecessary and only interesting as a fun coding exercise.

DOUBLE UPDATE! Be sure to read Peli’s post in which he explores all of these implementations using PEX. Apparently I have a lot more unit tests to write in order to define the expected behavior of the code.

UPDATE: By the way, after you read this post, check out the post in which I revisit this topic and add two more implementations to check out.

Recently I found myself in a situation where I wanted to format a string using a named format string, rather than a positional one. Ignore for the moment the issue on whether this is a good idea or not, just trust me that I’ll be responsible with it.

The existing String.Format method, for example, formats values according to position.

But what I wanted was to be able to use the name of properties/fields, rather than position like so:

Looking around the internet, I quickly found three implementations mentioned in this StackOverflow question.

All three implementations are fairly similar in that they all use regular expressions for the parsing. Hanselman’s approach is to write an extension method of object (note that this won’t work in VB.NET until they allow extending object). James and Oskar wrote extension methods of the string class. James takes it a bit further by using DataBinder.Eval on each token, which allows you to have formats such as {foo.bar.baz} where baz is a property of bar which is a property of foo. This is something else I wanted, which the others do not provide.

He also makes good use of the MatchEvaluator delegate argument to the Regex.Replace method, perhaps one of the most underused yet powerful features of the Regex class. This ends up making the code for his method very succinct.

I hade a chat about this sort of string parsing with Eilon recently and he mentioned that many developers tend to ignore or get escaping wrong. So I thought I would see how these methods handle a simple test of escaping the braces.

String.Format with the following:

So I would expect with each of these methods, that:

Certainly this is not such a big deal as this really is an edge case, but you never know when an edge case might bite you as Zune owners learned recently. More importantly, it poses an interesting problem - how do you handle this correctly? I thought it would be fun to try.

This is possible to handle correctly using regular expressions, but it’s challenging. Not only are you dealing with balanced matching, but the matching depends on whether the number of consecutive braces are odd or even.

For example, the following “{0}}” is not valid because the right end brace is escaped. However, “{0}}}” is valid. The expression is closed with the leftmost end brace, which is followed by an even number of consecutive braces, which means they are all escaped sequences.

As I mentioned earlier, only James’s method handles evaluation of sub-properties/fields via the use of the DataBinder.Eval method. Critics of his blog post point out that this is a performance killer.

Personally, until I’ve measured it in the scenarios in which I plan to use it, I doubt that the performance will really be an issue compared to everything else going on. But I thought I would check it out anyways, writing a simple console app which runs each method over 1000 iterations, and then divides by 1000 to get the number of milliseconds each method takes. Here’s the result: 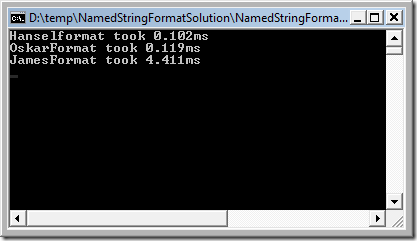 Notice that James’s method is 43 times slower than Hanselman’s. Even so, it only takes 4.4 milliseconds. So if you don’t use it in a tight loop with a lot of iterations, it’s not horrible, but it could be better.

At this point, I thought it would be fun to write my own implementation using manual string parsing rather than regular expressions. I’m not sure my regex-fu is capable of handling the challenges I mentioned before. After implementing my own version, I ran the performance test and saw the following result. 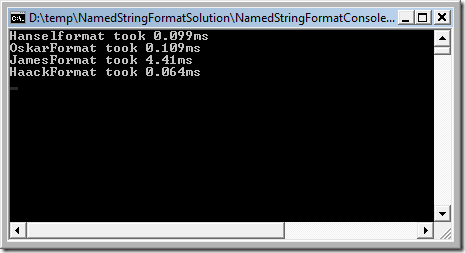 One drawback to not using regular expressions is that the code for my implementation is a bit long. I include the entire source here. I’ve also zipped up the code for this solution which includes unit tests as well as the implementations of the other methods I tested, so you can see which tests they pass and which they don’t pass.

The core of the code is in two parts. One is a private method which parses and splits the string into an enumeration of segments represented by the ITextExpression interface. The method you call joins these segments together, evaluating any expressions against a supplied object, and returning the resulting string.

I think we could optimize the code even more by joining these operations into a single method, but I really liked the separation between the parsing and joining logic as it helped me wrap my head around it. Initially, I hoped that I could cache the parsed representation of the format string since strings are immutable thus I could re-use it. But it didn’t end up giving me any real performance gain when I measured it.

And the code for the supporting classes

I mainly did this for fun, though I plan to use this method in Subtext for email fomatting.

Let me know if you find any situations or edge cases in which my version fails. I’ll probably be adding more test cases as I integrate this into Subtext. As far as I can tell, it handles normal formatting and brace escaping correctly.