Picture a developer’s conference held at a resort on a tropical island. What comes to mind? An endless supply of Piña Coladas? Sand abrasions in all the dark crevices of your body? Or perhaps, if you’re a developer, you imagine sitting on the beach, staring out at the ocean as a nice respite between sessions.

Or, are you suspicious that the conference is a smokescreen for a paid vacation in disguise.

That last view reflects a general distrust of developers and a deep seated idea that workers must suffer or it doesn’t count as work. After all, that’s why they call it work, right? How bleak!

Instead, what comes to my mind is a great learning and networking opportunity like any other conference that just happens to be in a warm beautiful place.

The reason I ask is that last week I had the great pleasure to give the opening keynote for the first ever Caribbean Developer’s Conference, held in Punta Cana, Dominican Republic. 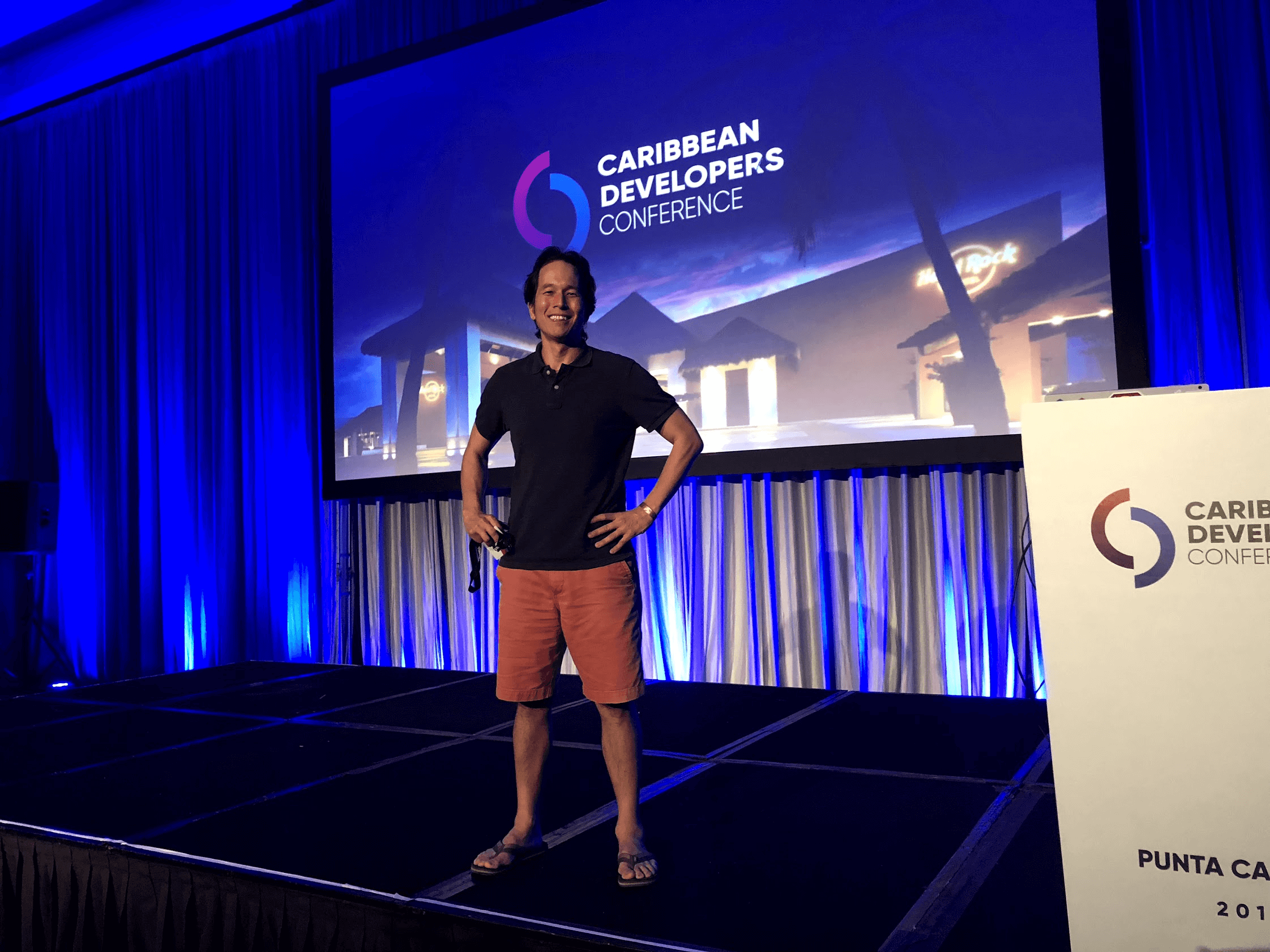 This was in a beautiful location with soft sandy beaches and endless Piña Coladas. It was relaxing, refreshing, and dare I say it? Fun! At the same time, it was a solid impactful conference where I learned a lot and made a lot of great new connections.

The conference was held at the Hard Rock Hotel and Casino, an all-inclusive resort. Just look at this place. 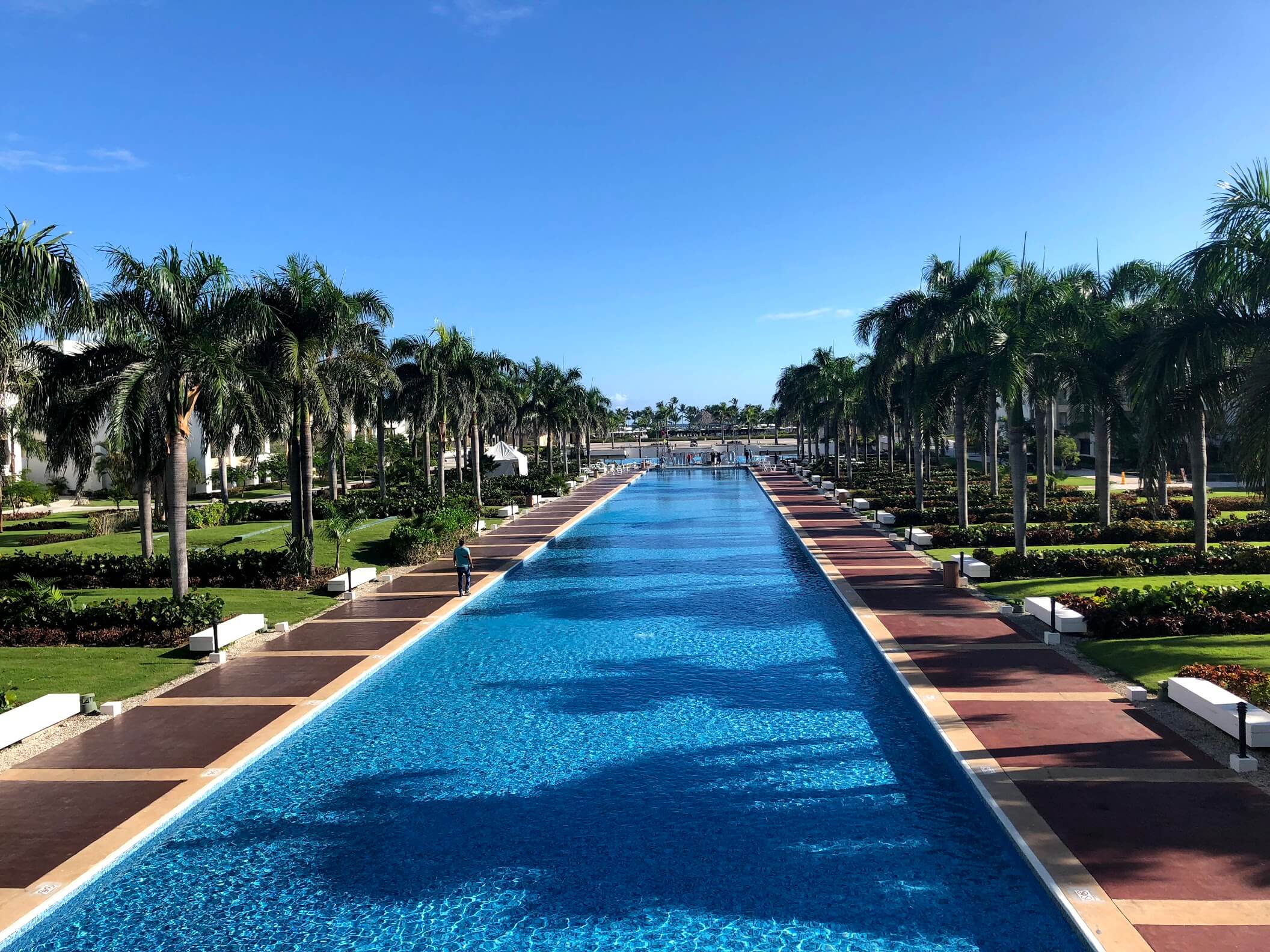 Do I look relaxed? 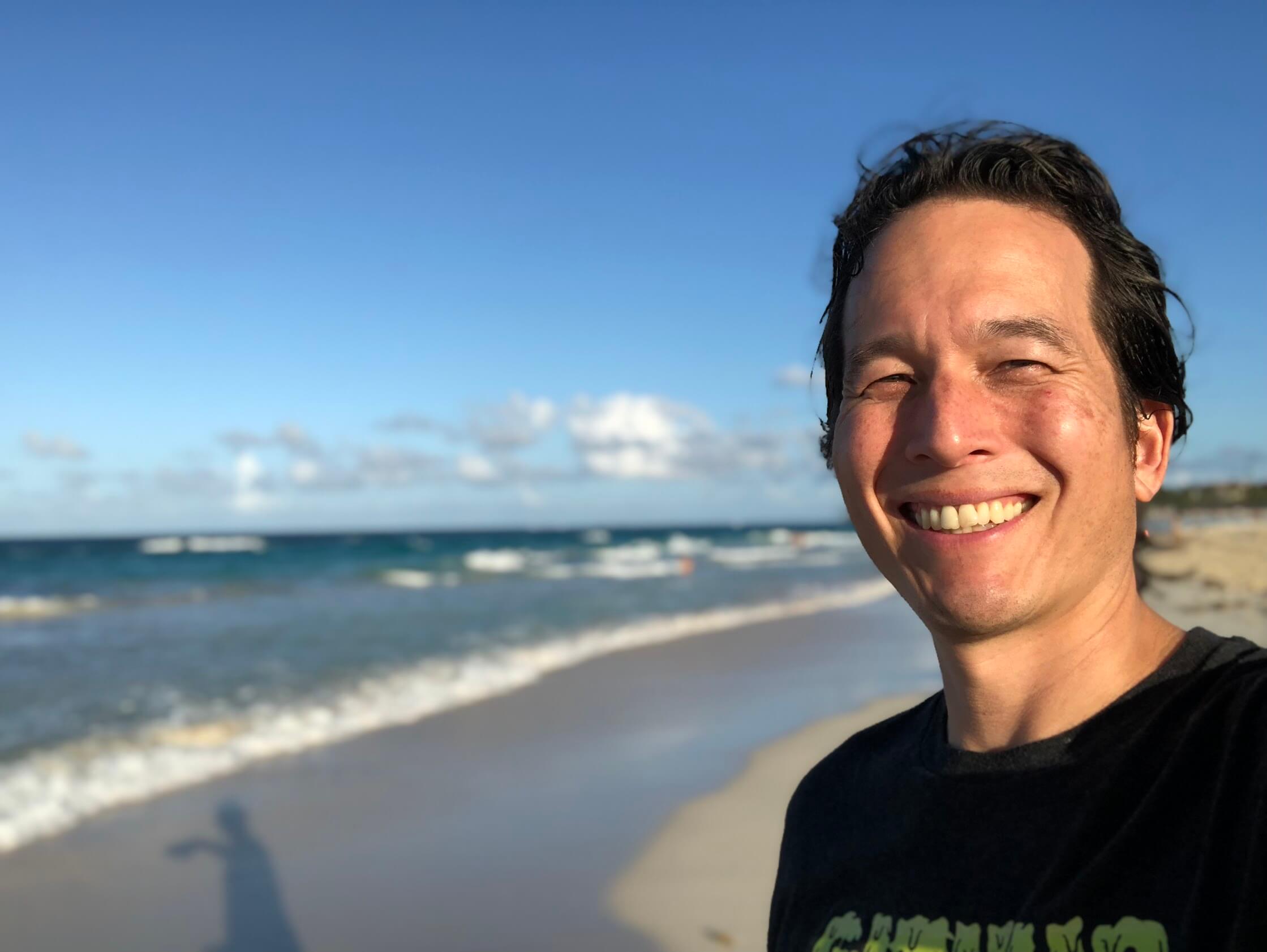 According to Eventbrite, the platform used to manage the conference, this conference featured 45 speakers from 15 countries and 33 different companies.

The speaker line-up was impressive too. And I’m not just saying that because it included me. 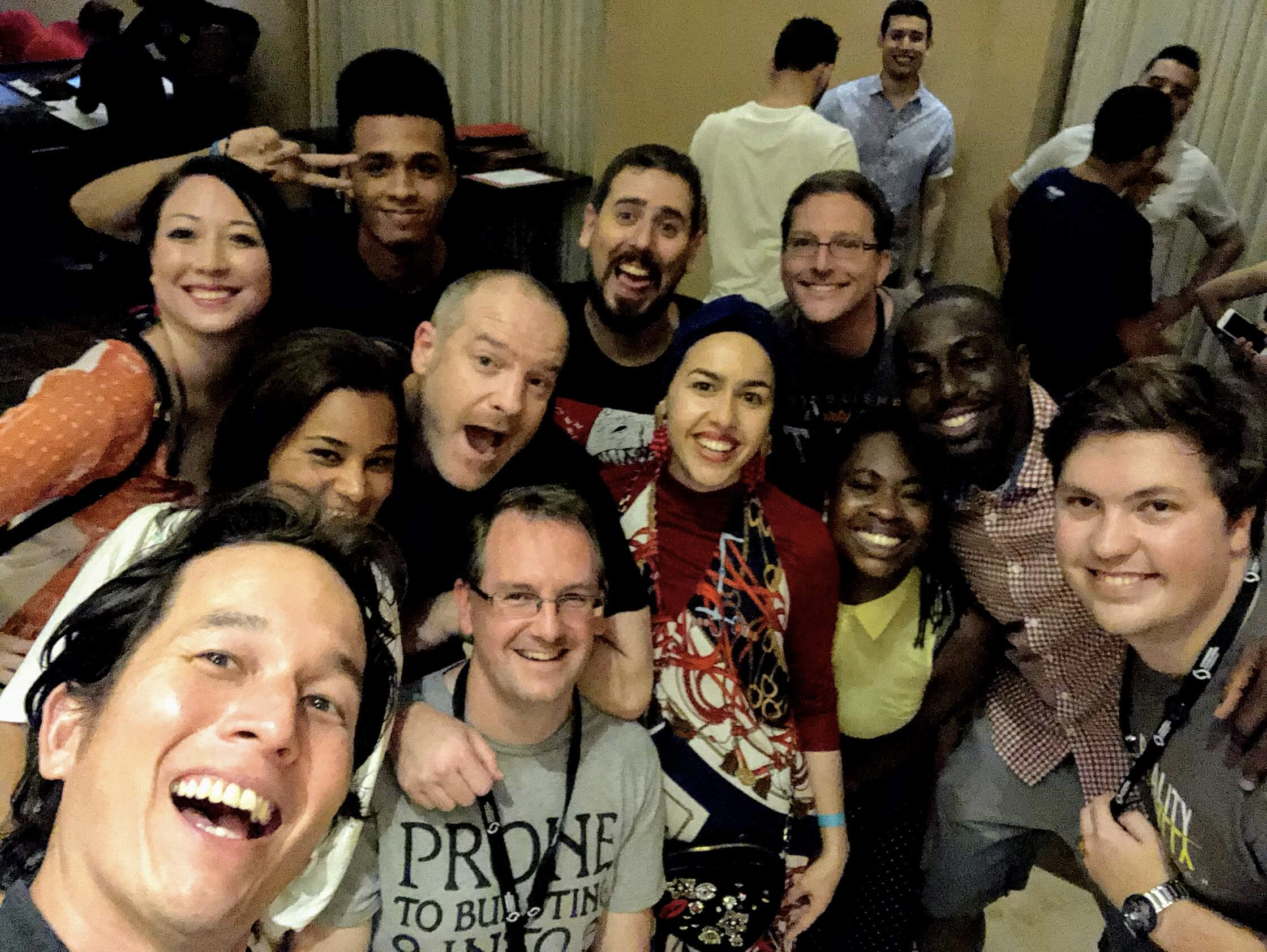 There were 300 participants from 14 countries and 157 different companies. Eventbrite shows that 67% of attendees were men and 33% were women.

The organizers are committed to creating a conference that represents and embraces the entire Caribbean region, not just the Dominican Republic (DR). Having said that, 90% of the attendees country were from the DR.

Their goal is to grow this into a true regional conference that is diverse and inclusive. This first one was a great start, but there’s more work to be done.

Part of the challenge the organizers face is the cost of attending a conference might be reasonable for those of us in richer countries, but exorbitant for a typical developer in the DR.

So how did they achieve 90% local developers? Sponsorships. A big goal for this conference was to provide opportunities for developers in the region who might not get to meet someone like Jon Skeet otherwise. And believe me, it’s an absolute pleasure to meet Jon. 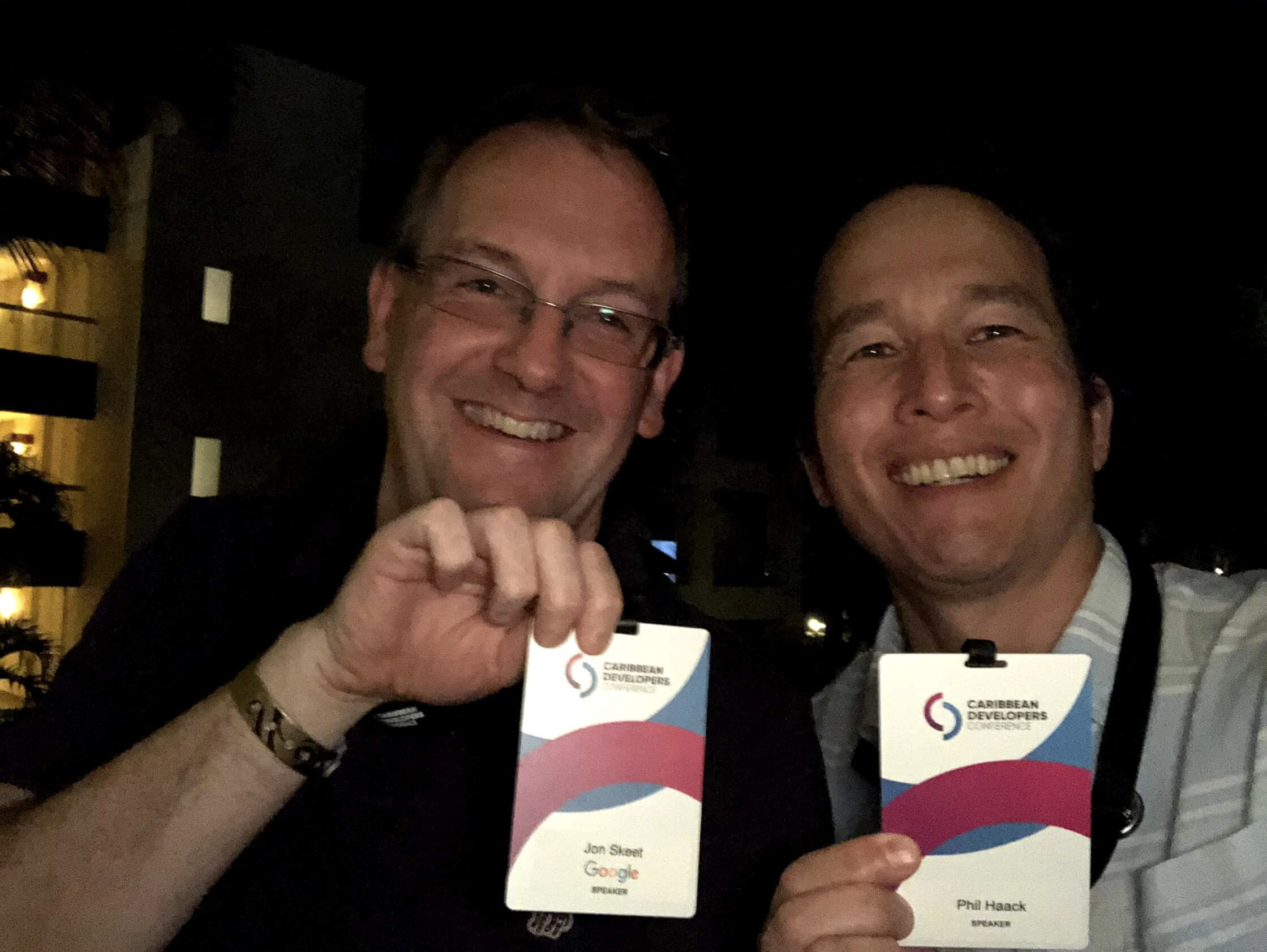 Just look at this guy! Have you ever met a friendlier person? We’re showing our badges as a nod to the last time we met at a conference and did the same thing.

Haack and Skeet. Sounds like a place for skeet shooting, but with hand axes.

Or perhaps the premise for the next great buddy programmer movie. He’s the by the book good programmer. I’m the renegade bad programmer who lives by his own rules. Together we’ll fight out of control requirements…and crime.

As usual, I digress.

The organizers succeeded in providing these opportunities not only to locals, but to other speakers as judged by my flight of fancy. Next year, they aspire to grow that opportunity even more.

One thing that struck me was how much appreciation local developers have for visiting speakers. After my keynote, I had so many attendees mention how much they appreciated my talk. And I don’t mean that as a humble brag with the subtlety of a rhinoceros in a leotard. 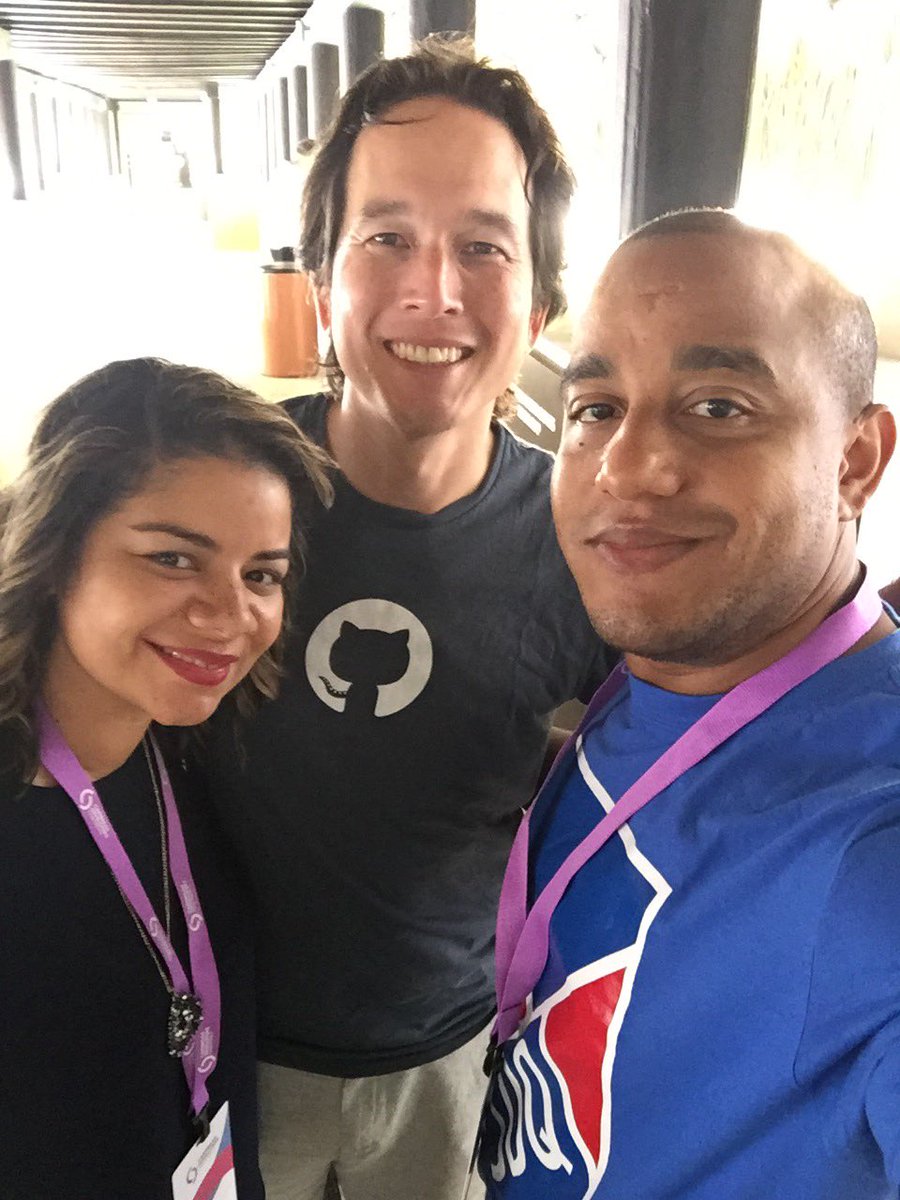 So many attendees wanted to take their picture with me and the other speakers as well. It’s a big deal to have well known speakers come to speak in your country if your country is largely ignored by the larger software industry.

I do believe this needs to be balanced by also making sure to have plenty of local speakers. Speaking at an international conference is a stepping stone to opportunities to speak at more conferences in other countries.

The goal is to create an exchange of talent, ideas, and speakers. Anything else comes off as patronizing.

The organizers of the conference are a small consulting shop called Megsoft. In this photo, I’ve crashed their retreat. 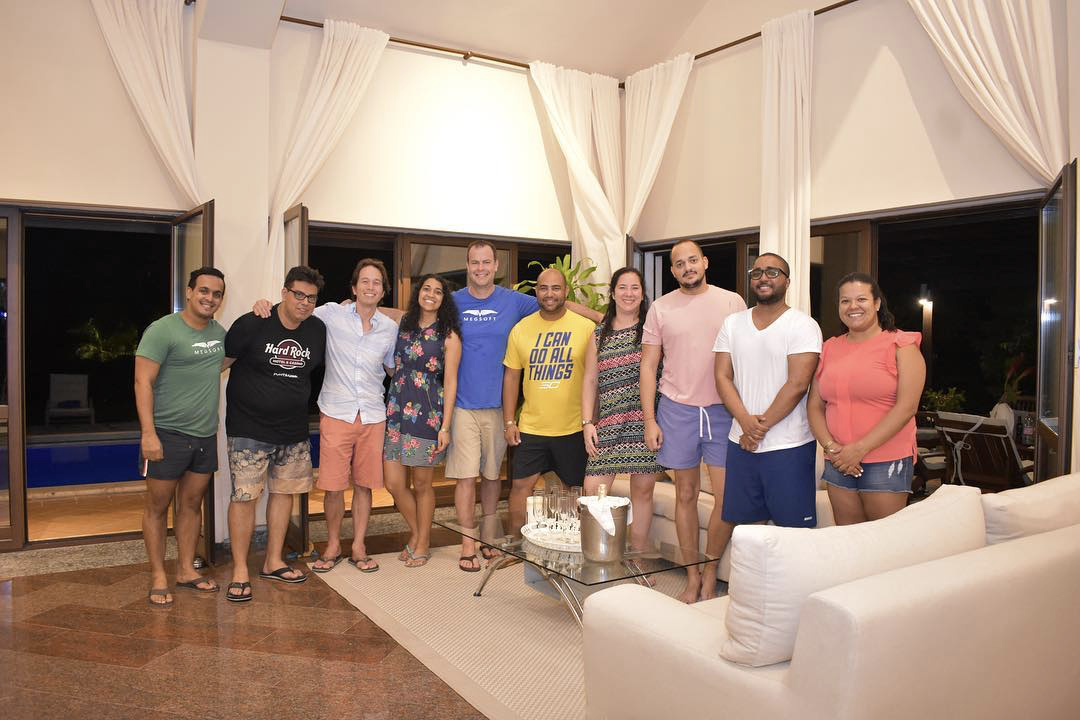 During the conference, they announced there will definitely be another one next year, date and location to be announced in a couple months.

If you’re a speaker, this conference is well worth your time. Not just for the location, but to reach an audience that is hungry and excited to learn from you.

Not to mention it enjoys a refreshing intimacy. It’s small enough where the speakers all got to know each other thanks to a WhatsApp group (though if that’s not your thing, you could opt out). It’s not the type of conference where most speakers fly in and fly out without interacting with people. That level of bonding is rare for conferences that I’ve spoken at.

If you’re a sponsor, this conference is reaching an audience that you may have largely neglected up until now. It’s a good time to get involved. The audience tends to be younger and very excited to learn.

And if you’re an attendee, this conference provides great content, great speakers, in a great location. What’s not to love?!