The screaming was unexpected.

The field trip guide passed out over-sized plastic models of pollinators to the first graders. A beetle, a bee, a humming bird. But as the critters, passed from hand to hand, approached young Tiberius (name changed to protect the innocent), he began a full scale nuclear grade melt down. 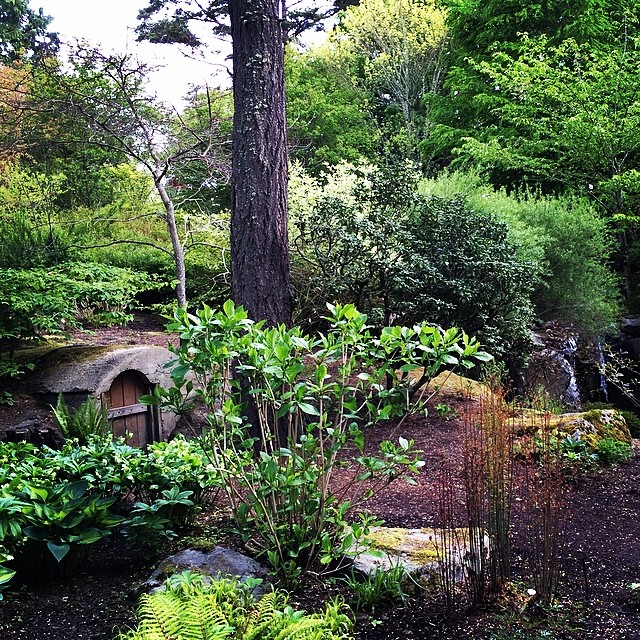 This happened last week as I chaperoned my son’s first-grade field trip to the Bellevue Botanical Gardens. I’m still not sure why the school would just trust me with that responsibility. Perhaps the fact my children are still alive so far qualifies me. Not to mention that there were four other parents and two adult guides - a total of seven adults for a group of fourteen kids. Still outnumbered, but it gave us a fighting chance.

The theme of the trip was “flower power.” Kids are already well versed in passive resistance and non-violent protest (and violent protest for that matter), so this trip focused instead on the constituent parts of the flower and how all of them work together with pollinators to propagate the species.

At the moment, these plastic pollinators were not spreading pollen but terrorizing a poor kid.

Perhaps it was fortunate that I was a chaperone as Tiberius was my son’s friend and had been over to my house a few times. A friendly face could be comforting, but he had to make do with mine. I waved him over to stand next to me and the guide gave him a pinwheel representing wind. Wind is a great pollinator. It pollinates cars and patio furniture with that sticky yellow crap.

Tiberius calmed down and all seemed well. I felt for the kid, but I was also disconcerted by some thoughts I had at the time that I’m not proud of.

To explain, I’ll need the help of Louis CK. In his HBO special, Oh My God, there’s this great bit where Louis describes the sort of cognitive dissonance I experienced.

He calls it a category of his brain called “Of course! But maybe” and provides several examples. They’re pretty harsh, so you’ve been warned. Here’s his first one,

Of course, of course, children who have nut allergies need to be protected. Of course! We have to segregate their food from nuts. Have their medication available at all times. And anybody who manufactures or serves food need to be aware of deadly nut allergies. Of course!

But maybe. Maybe, if touching a nut kills you, you’re supposed to die.

Of course I felt compassion for Tiberius. But there was this other thought. But maybe this kid needs to get a grip and toughen up. It was a momentary knee jerk reaction. Of course he’s only six years old, but maybe… Later on in the day something would happen that would give me a different insight into this idea.

After exploring more of the garden, we end up at the visitor center and another guide, a former teacher, cross examines the children about what they’ve learned on the trip as they sat cross legged on the floor.

As they reviewed pollinators, she held up a large photo of a bee and Tiberius again loses his shit (thankfully not in the literal sense). But maybe popped in my head as I stood there slack jawed with the other adults. I braced for the worse expecting the other kids to snigger at him or tease him outright.

Before any of us could act, the boy in front of Tiberius sat up straighter to block his view of the photo. The girl next to that boy scooted over as well creating a little first-grader phalanx to block Tiberius’s view while he buried his head in fear in the boy’s back.

With his hand placed softly on Tiberius’s back, the boy behind Tiberius quietly gave him directions “Don’t look now” and “Ok, you can look now” as the teacher cycled through photos.

I remember often being on the receiving end of such teasing at that age. Instead the kids surprised me. They banded together to care for one of their own with compassion while I was having my shameful but maybe thought.

I rarely cry, but I nearly lost it right then and there. I’m ashamed at my own initial gut reaction. Our culture is pretty fucked up when you think about. We tell boys it’s not ok to be afraid. It’s not ok to cry as if this is some universal truth about manhood.

But a cursory reading of historical texts demonstrates this is a cultural construct, and an unhealthy one at that. The Old Testament is rife with men weeping. Old Japanese and European epics are full of the “manliest” heroes crying buckets.

In his book Crying, The Natural and Cultural History of Tears Tom Lutz notes,

In the twelfth-century Tales of the Heiki, men cry copiously. The warrior Koremori declares, “I am forever undecided,” and weeps. The monk Sonei weeps in abjection as he pleads to be told the way to escape the endless circle of death and rebirth, and weeps tears of joy when he is told.

In the translation of Beowulf by Leslie Hall,

Then the noble-born king kissed the distinguished, Dear-lovèd liegeman, the Dane-prince saluted him, And claspèd his neck; tears from him fell,

These passages describe very “manly” warriors crying as something natural. My story concerns a six-year old child crying as if it were abnormal.

These kids showed me what true empathy and compassion is. The tragedy is that over the next few years, socialization, peer-pressure, media influences, etc. will destroy that pure compassion and empathy. They’ll be inundated with messages that such behavior is weak and pathetic until they’re as snarky and mean spirited as I often am. I hope to fight that influence on my kids every step of the way. If they can retain an ounce of the caring these six year olds naturally have, it would do a lot of good in this world.

Some will say the boy needs to toughen up for his own sake. It’s a dog-eat-dog world out there after all. Perhaps that’s true, but we are not dogs and we don’t have to participate in the dog eating. We are humans and we can do better.