Over the past few years I’ve become more and more interested in functional programming concepts and the power, expressiveness, and elegance they hold.

But you don’t have to abandon your language of choice and wander the desert eating moths and preaching the gospel of F#,  Haskell, or Clojure to enjoy these benefits today!

Control structures have been around nearly as long as programming but it’s hard for me to see them as more than an annoyance.  Over and over again, I find that better code has fewer if-statements, fewer switches, and fewer loops.  Often this happens because developers are using languages with better abstractions.  They aren’t consciously trying to avoid control structures but they do.

We don’t need to try and kill every if statement, but perhaps the more we do, the better our code becomes. 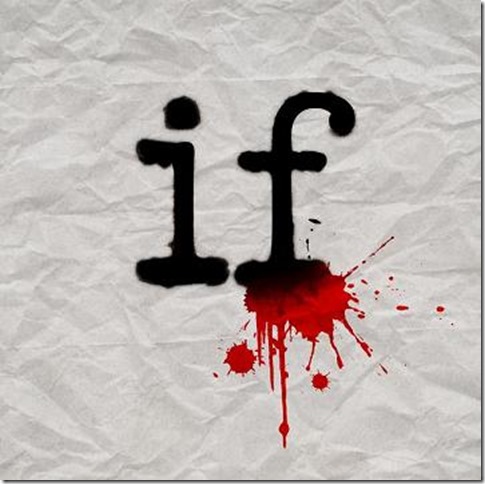 Photo from wikimedia: Cover of If by the artist Mindless Self Indulgence

He then provides an example in Ruby of a padded “take” method.

I recommend reading his post. It’s quite interesting. At the risk of spoiling the punch line, here’s the before code which makes use of a conditional…

… and here is the after code without the conditional. In this case, he pads the source array with just enough elements as needed and then does the take.

I thought it would be interesting to translate the after code to C#. One thing to note about the Ruby code is that it always allocates a new array whether it’s needed or not.

Now, I haven’t done any benchmarks on it so I have no idea if that’s bad or not compared to how often the code is called etc. But it occurred to me that we could use lazy evaluation in C# and completely circumvent the need to allocate a new array while still being expressive and elegant.

I decided to write it as an extension method (I guess that’s similar to a Mixin for you Ruby folks?).

This code takes advantage of some Linq methods. The important thing to note is that Concat and Repeat are lazily evaluated. That’s why I didn’t need to do any math to figure out the difference in length between the source array and the the take count.

I just passed the total count we want to take to Repeat. Since Repeat is lazy, we could pass in int.MaxValue if we wanted to get all crazy up in here. I just passed in count as it will always be enough and I like to play it safe.

Now my Ruby friends at work might scoff at all those angle brackets and parentheses in the code, but you have to admit that it’s an elegant solution to the original problem.

Here is a test to demonstrate usage and show it works.

I also ran some quick perf tests on it comparing PaddedTake to the built in Take . PaddedTake is a tiny bit slower, but the amount is like the extra light cast by a firefly at noon of a sunny day. The performance of this method is way more affected by the number of elements in the array and the number of elements you are taking. But in my tests, the performance of PaddedTake stays pretty close to Take as we grow the array and the take.

I think it’d be interesting to have a build task that reported back the number of if statements and other control structures per line of code and see if you can bring that down over time. In any case, I hope this helps you improve your own code!