Google is shuttering Google Reader in a little over a day (on July 1st, 2013) as I write this. If you use Google Reader to read my blog, this means you might miss out on my posts and I KNOW YOU DON’T WANT THIS!

Then again, maybe this is finally your chance to make a break, get some fresh air, stop reading blogs and start creating! I won’t hold it against you.

But for the rest of you, it’s a good time to find a replacement. Or at the very least follow me on Twitter since I do tweet when I blog.

There’s a lot of Google Reader replacements out there, but only two that I like so far. 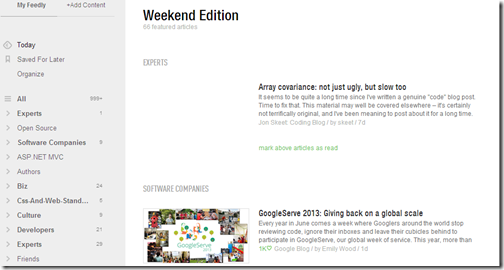 Feedly is gorgeous. There are apps for many platforms, but the browser works pretty well. Also, you can use Google to log into it and import your Google Reader feeds. I hope Google allows exporting to Feedly and other aggregators after July 1st even as they close down the Google Reader site.

The problem I have with Feedly is that it doesn’t work like Google Reader. It wouldn’t be so bad if it had a better flow for reading items, but I find its interface to be quirky and in some cases, unintuitive. For example, it seems I have to mark items as read by clicking “mark above articles as read” rather than having it do it automatically like Reader does after you scroll past it.

This leads me to… 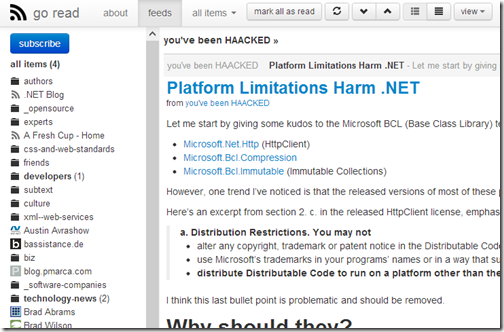 Go Read is a late entry into the list, but there are three important things I really like about it:

For some more details, check out the announcement blog post by the author, Matt Jibson, a developer at Stack Exchange:

I would like to announce the release of Go Read. It as a Google Reader clone, and designed to be close to its simplicity and cleanliness. I wanted to build something as close to Google Reader as made sense for one person to build in a few months.

It’s basically Google Reader, but without all the cruft and where you can send pull requests to improve things!

In fact, there’s already a few pull requests with some nice user interface polish that should hopefully make it into the site soon.

Despite some false starts, I have it up and running on my machine. I sent a few pull requests to update the README to help other clueless folks like me get it set up for hacking on.

So check it out, import your Google Reader feeds, and never miss out on another Haacked.com post EVER!

UPDATE: I forgot to mention what is perhaps the most important reason for me to prefer Go Read. I don’t want to end up in another Google Reader situation again and rely on an RSS Aggregator that isn’t a solid business and might not stick around. At least with an open source option, I have the code running on my own machine as a backup in a pinch.