The other day I needed a simple JSON parser for a thing I worked on. Sure, I’m familiar with JSON.NET, but I wanted something I could just compile into my project. The reason why is not important for this discussion (but it has to do with world domination, butterflies, and minotaurs).

I found the SimpleJson package which is also on GitHub.

SimpleJson takes advantage of a neat little feature of NuGet that allows you to include source code in a package and have that code transformed into the appropriate namespace for the package target. Oftentimes, this is used to install sample code or the like into a project. But SimpleJson uses it to distribute the entire library.

At first glance, this is a pretty sweet way to distribute a small single source file utility library. It gets compiled into my code. No binding redirects to worry about. No worries about different versions of the same library pulled in by dependencies. In my particular case, it was just what I needed.

But I started to think about the implications of such an approach on a wider scale. What if everybody did this?

If such a library were used by multiple packages, it actually could limit the consumer’s ability to update the code. 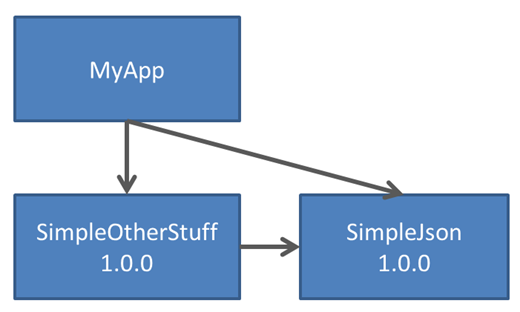 Now suppose we learn that SimpleJson 1.0.0 has a very bad security issue and we need to upgrade to the just released SimpleJson 1.1.

So we do just that. Everything should be hunky dory as we’re now using SimpleJson 1.0.0 everywhere. Or are we? 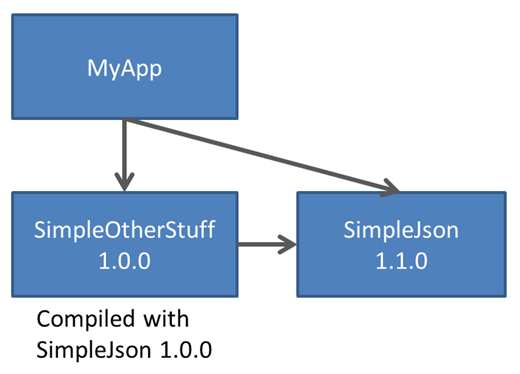 If all the references to SimpleJson were assembly references, we’d be fine. But recall, it’s a source code package. Even though we upgraded it in our application, SimpleOtherStuff 1.0.0 has SimpleJson 1.0.0 compiled into it.

There’s no way to upgrade SimpleOtherStuff’s reference other than to wait for the package author to do it or to manually recompile it ourselves (assuming the source is available).

You Are in Control

A guiding principle in the design of NuGet is we try and keep you, the consumer of the packages, in control of things. Want to uninstall a package even though other packages reference it? We’ll prevent it by default but then offer you a –Force flag so you can tell NuGet, “No really, I know what I’m doing here and am ready to face the consequences.”

We don’t do this perfectly in every case. Pre-release packages come to mind. But it’s a principle we try to follow.

Source code packages are interesting in that they give you more control in one area (you have the source), but take it away in another (upgrades are no longer complete).

Note that I’m not picking on SimpleJson. As I said before, I really needed this. In fact, I contributed back with several Pull Requests. I’m just pointing out a caveat to consider when using such packages.

So yeah, be careful. There are caveats. But couldn’t we make this better? Well I have an idea. Ok, it’s not my idea but an idea that some of my coworkers and I have bounced around for a while.

Imagine if you could attach a Git repository to your NuGet package. When you install the package, you could add a flag to install it as a Git Submodule rather than the normal assembly approach. Maybe it’d look like this.

What this would do is initialize a submodule, and grab the source from GitHub. Perhaps it goes further and adds the files as linked files into your target project based on a bit of configuration in the source tree.

There’s a lot of possibilities here to flesh out. The Upgrade-Package command simply run a Git update submodule command on these submodules and do a normal update for all the other packages.

Since Microsoft recently made it clear that Git is the future of DVCS as far as Microsoft is concerned, maybe now is the time to think about tighter integration with NuGet. What do you think?

At the very least, perhaps NuGet needs a better extensibility model so we could build this support in outside of NuGet. That’s the more prudent approach of course, but I’m not feeling so prudent today.