I have a confession to make.

I sometimes avoid your feedback on the Twitters. It’s nothing personal. I have a saved search for stuff I work on because I want to know what folks have to say. I want to know what problems they might run into or what ideas they have to improve things. Nonetheless, I sometimes just let the unread notifications sit there while I hesitate and cringe at the thought of the vitriol that might be contained within.

I know. I know. That’s terrible. It’s long been conventional wisdom that if you’re going to write software and ship it to other humans, you better develop a thick skin.

Hey, I used to work at Microsoft. People have…strong…opinions about software that Microsoft ships. It’s the type of place you learn to develop a full body callus of a thick skin. So I’m with you.

But even so, when you invest so much of yourself into something you create, it’s hard not to take criticisms personally. The Oatmeal captures this perfectly in this snippet of his brilliant post: Some thoughts on and musing about making things for the web. 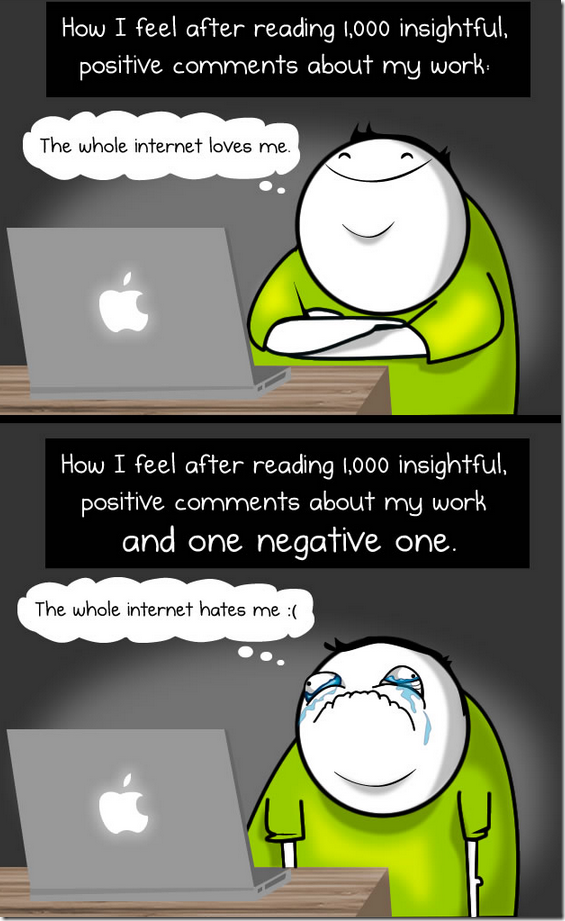 That is me right there. I’m not going to stop shipping software so the best thing to do is work harder and develop a thicker skin. Right?

I strongly believed this for years, but a single blog post changed my mind. This post didn’t say anything I hadn’t heard before. But it was the experience of the author that somehow clicked and caused me to look at things in a new way. In this case, it was Sam Stephenson’s blog post, You are not your code that did it for me.

In his post, he talks about the rise and fall of his creation, Prototype and how he took its failure personally, and the lesson that he learns as a result.

I have learned that in the open-source world, you are not your code. A critique of your project is not tantamount to a personal attack. An alternative take on the problem your software solves is not hostile or divisive. It is simply the result of a regenerative process, driven by an unending desire to improve the status quo.

This sparked an epiphany. Reinforcing a thick skin detaches me from the people using my software. Even worse, it puts me in an adversarial position towards the folks who just want to get something done with the software. This is so wrong. Rather than work on a developing a thicker skin, I really should work on developing more empathy.

Show of hands. Have any of you ever been frustrated with a piece of software you’re trying to use? Of course you have! Now put your hand down. You look silly raising your hand for no reason.

How did you feel? I know how I’ve felt. Frustrated. Impotent. Stupid. Angry. Perhaps I said a few words I’m not proud of about how I might inflict bodily harm on the author in anatomically impossible ways should we ever meet in a dark alley.

I certainly didn’t mean those words (except in the case of bundled software written by hardware companies. That shit makes me cray!). I was simply lashing out due to my frustrations.

And it hit me.

The angry tweets calling my work “a piece of crap” is written by folks just like me. Rather than harden my stance in opposition to these folks, I need to be on their side!

I need to remove the adversarial mindset and instead share in their frustration as a fellow human who also understands what it’s like to be angry at software. I no longer need to take this criticism personally. This shift in mindset unblocked me from diving right into all that feedback on Twitter. I started replying to folks with something along the lines of “I’m sorry. That does suck. I know it’s frustrating. I’m going to have a word with the idiot who wrote that (namely me)! Email me with details and I’ll work to get it fixed.”

The end result is I’m able to provide much better support for the software.

By doing this, I’ve also noticed a trend. When you sincerely address people’s frustrations, they tend to respond very warmly. Many of them know what it’s like to be criticized as well. People are quick to forgive if they know you care and will work to make it better.

Sure, there will still be moments where I have a knee jerk reaction and maybe lose my temper for a moment. But I think this framework for how to think about feedback will help me do that much less and preserve my sanity. I am definitely not my code. But I am here to help you with it.