At the end of last year, I wrote a blurb about the Open Source Fest event at Mix 2011. Imagine the typical exhibition hall, but filled with around 50 open source projects. Each project had a station in a large room where project members presented what they were working on to others. You could see the gleam of inspiration in the smiles of developers as they exchanged ideas and suggestions. I left this event completely fired up.

This is the spirit we tried to capture with the MonkeySpace conference this year. And at least for me, it succeeded. I’m fired up! There was much sharing of ideas, some of which I’ll talk about in subsequent blog posts. One such idea is I hope we add something like the open source exhibition hall in a future MonkeySpace. 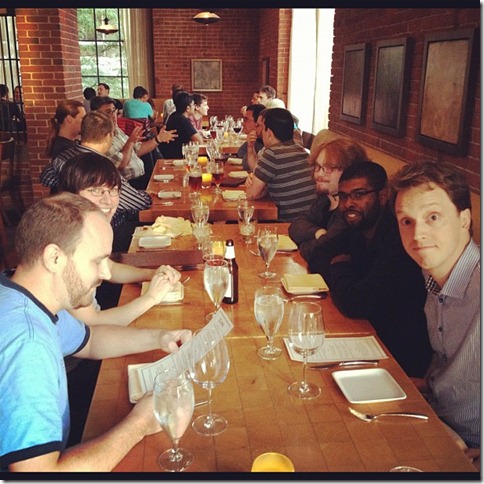 MonkeySpace is a rebranded and refocused Monospace conference. While MonoSpace dealt mostly with Mono, the goal of Monkeyspace is to put the spotlight on .NET open source everywhere, not just on Mono. Obviously Mono is a big part of that. But so is Microsoft. But most of all, the many small “labor of love” projects from those in the .NET OSS community are a big part of this.

Before I go further, I want to briefly describe the relationship of MonkeySpace to me, Mono, and MonkeySquare (the website is, as the cliché goes, under construction).

As I mentioned already, MonkeySpace is a rebranded Monospace conference, but with a new focus. Dale Ragan and others created a non-profit called MonkeySquare with the goal to “evangelize cross platform and open-source development in .NET.”

I got involved when Dale asked me to be on the board of directors for the organization. I admit, I was a bit hesitant at first as I tend to overcommit and I need my afternoon naps, but the mission resonated with me. I suggested he invite Scott Hanselman because he’s a force to be reckoned with and a fountain of ideas. And he has a big forehead which has to count for something.

As we started to have board meetings, it became clear that we wanted the next MonoSpace to become MonkeySpace. Due to the herculean efforts of Dale Ragan and others like Joseph Hill of Xamarin, this became a reality. We kept the first MonkeySpace small, but we hope to grow the conference as a premier place for .NET open source developers to share ideas and grow the ecosystem.

In recent times, there’s been some pessimism around .NET open source. There’s the occasional rustle of blog posts declaring that someone is “leaving .NET”. There’s also this perception that with Windows 8, the Windows team is trying its best to relegate .NET into the dustbin of legacy platforms. I don’t necessarily believe that to be the case (intentionally), but I do know that many .NET developers feel disillusioned.

But here’s the thing. The .NET ecosystem is becoming less and less solely dependent on Microsoft and this is a good thing.

An example I like to point to is when WPF was first released, support for presentation separation patterns (such as MVP or MVC) was non-existent and there was much gnashing of teeth. It didn’t take long before small open source projects such as Caliburn Micro sprung into existence to fill in the gaps. This by no means excuses some of the design choices that still plague developers who want to write testable WPF applications, but it certainly makes a bad situation much better.

In his keynote at MonkeySpace, Miguel de Icaza told a story that is another dramatic illustration of this phenomena. Microsoft XNA is a toolkit for building PC and X-Box games using .NET. But for whatever reasons, Windows RT does not support running XNA applications. You can still write an XNA game for Windows 8, but it won’t run on the Windows RT devices.

Once again, the open source community comes to the rescue with MonoGame. Here’s a blurb from their project page, emphasis mine:

MonoGame is an Open Source implementation of the Microsoft XNA 4 Framework. Our goal is to allow XNA developers on Xbox 360, Windows & Windows Phone to port their games to the iOS, Android, Mac OS X, Linux and Windows 8 Metro.  PlayStation Mobile development is currently in progress.

Interesting! MonoGame makes it possible to take your existing XNA based X-Box game and with a tiny bit of effort, port it on Windows RT. Think of the implications.

A cornerstone of the Windows 8 strategy is to entice a new developer audience, web developers, to build client Windows applications with a development experience that allows them to leverage their existing JavaScript and HTML skills. Nevermind the fact that they ignore the culture and idioms of these communities, replacing such idioms with Windows specific conventions that are awkward at best.

Ironically, something like MonoGame may be better positioned to realize this strategy for Microsoft in the short term than Microsoft’s own efforts!

As an example, Miguel talked about the developers of Bastion, an X-Box and PC game, and how they used MonoGame to port the game to the iPad. Now that same developer could easily port the game to Windows RT should they choose to. Before MonoGame, they might not have considered this option.

Miguel suggested that the majority of applications in the Windows 8 app store are C# applications. This only makes sense because the attempt to bring over web developers is a long lead strategy. Meanwhile, C# developers have been Microsoft’s bread and butter for a while now and are Microsoft’s to lose. They should not take them lightly and one would hope, if these numbers are true, that this has the attention of the Windows folks.

It certainly makes me excited about the potential for C# to become, as Miguel calls it, the lingua franca for cross device applications.

So despite the pessimism, my discussions at MonkeySpace leave me optimistic that .NET and .NET OSS is here to stay. There’s a lot of good OSS stuff coming from Xamarin, independents, and various teams at Microsoft such as the efforts from the MS Open Tech initiative and all the stuff that the Windows Azure team is churning out. But even if Microsoft started to deemphasize .NET, I believe .NET would endure because the community will continue to fill in the gaps so that the ecosystem abides.