In one mailing list I’m on, someone ran into a problem where they renamed a controller, but ASP.NET MVC could not for the life of it find it. They double checked everything. But ASP.NET MVC simply reported a 404.

This is usually where I tell folks to run the following NuGet command:

RouteDebugger is a great way to find out why a route isn’t matching a controller.

In this particular case, the culprit was that the person renamed the controller and forgot to append the “Controller” suffix. So from something like HomeController to Default.

In this post, I’ll talk a little bit about what makes a controller a controller and a potential solution so this mistake is caught automatically.

What’s with the convention anyways?

A question that often comes up is why require a name based convention for controllers in the first place? After all, controllers also must implement the IController interface and that should be enough to indicate the class is a controller.

Great question! That decision was made before I joined Microsoft and I never bothered to ask why. What I did do was make up my own retroactive reasoning, which is as follows.

Suppose we simply took the class name to be the controller name. Also suppose you’re building a page to display a category and you want the URL to be something like /category/unicorns. So you write a controller named Category. Chances are, you also have an entity class named Category too that you want to use within the Category controller. So now, a common default situation becomes painful.

If I could get in a time machine and revisit this decision, would I? Hell no! As my former co-worker Eilon always says; if you have a time machine, there’s probably a lot better things you can do than fix bad design decisions in ASP.NET MVC.

But if I were to do this again, I’m not so sure I’d require the “Controller” suffix. Instead, I’d suggest using plural controllers (and URLs) to better avoid conflicts. So the controller would be Categories and the URL would be /categories/unicorns. And perhaps I’d make the “Controller” suffix allowed as a way to resolve conflicts. So CategoryController would still work fine (as a conroller named “category”) if that’s the way you roll.

How do I detect Controller Problems?

Since I didn’t use my time machine to fix this issue (I would rather use it to go back in time and fix line endings text encodings), what can we do about it?

The simplest solution is to do nothing. How often will you make this mistake?

Then again, when you do, it’s kind of maddening because there’s no error message. The controller just isn’t there. Also, there’s other mistakes you could make, though many are unlikley. All the following look like they were intended to be controllers, but aren’t.

Controllers in ASP.NET MVC must be public, non-abstract, non-nested, and implement IController, or derive from a class that does.

How to detect these cases

As I mentioned before, it might not be that important to do this, but one thing you could consider is writing a unit test that detects these various conditions. Well how would you do that?

You’re in luck. Whether this is super useful or not, I still found this to be an interesting problem to solve. I wrote a ControllerValidator class with some methods for finding all controllers that match one of these conditions.

With these methods, it became a simple case of writing methods that checked for two out of these three conditions.

For example, to get all the controllers that don’t have the “Controller” suffix:

With these methods, it’s a simple matter to write automated tests that look for these mistakes.

I added these methods as part of the ControllerInspector library which is available on NuGet. You can also grab the source code from my CodeHaacks repository on GitHub (click the Clone in Windows button!).

If you get the source code, check out the following projects:

The demo website’s homepage uses these methods to show a list of bad controllers. 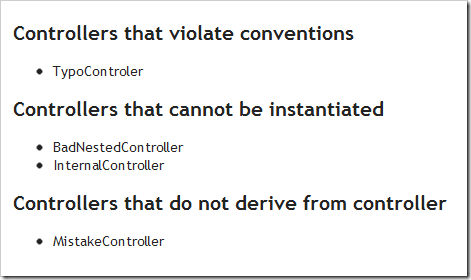 The code I wrote is based on looking at how ASP.NET MVC locates and determines controllers. It turns out, because of the performance optimizations, it takes a bit of digging to find the right code.

If you’re interested in looking at the source, check out TypeCacheUtil.cs on CodePlex. It’s really nice that ASP.NET MVC is not only open source, but also accepts contributions. I highly recommend digging through the source as there’s a lot of interesting useful code in there, especially around reflection.

If you don’t find this useful, I hope you at least found it illuminating.