Disclaimer: these opinions are my own and don’t necessarily represent the opinion of any person or institution who are not me.

The topic of sexism in the software industry has flared up recently. This post by Katie Cunningham (aka The Real Katie), entitled Lighten Up, caught my attention. As a father of a delightful little girl, I hope someday my daughter feels welcomed as a developer should she choose that profession.

In general, I try to avoid discussions of politics, religion, and racism/sexism on my blog not because I don’t have strong feelings about these things, but I doubt I will change anyone’s mind.

If you don’t think there’s an institutionalized subtle sexism problem in our industry, I probably won’t change your mind.

Instead, I want to attempt an empirical look at some problems that probably do affect you today that just happen to be related to sexism. Maybe you’ll want to do something about it.

But first, some facts.

Whether we agree on the existence of institutional sexism in our industry, I think we can all agree that our industry is overwhelmingly male.

It wasn’t always like this. Ada Lovelace is widely credited as the world’s first programmer. So there was at least a brief time in the 1840s when 100% of developers were women. As late as the 1960s, computing was seen as women’s work, emphasis mine:

“You have to plan ahead and schedule everything so it’s ready when you need it. Programming requires patience and the ability to handle detail. Women are ‘naturals’ at computer programming.”

The same site where I found that quote has a link to this great Life Magazine archive photo of IBM computer operators. 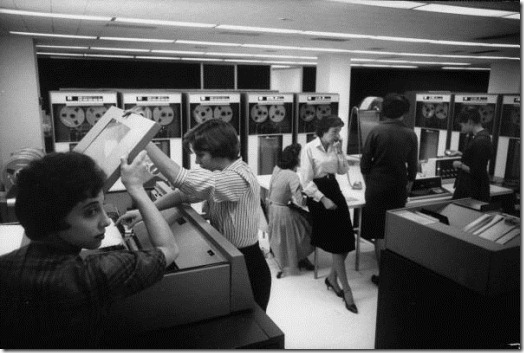 But the percentage of women declined steadily from that point. According to this Girls Go Geek post, in 1987, 42% of software developers were women. But then:

From 1984 to 2006, the number of women majoring in computer science dropped from 37% to 20% — just as the percentages of women were increasing steadily in all other fields of science, technology, engineering, and math, with the possible exception of physics.

The post goes on to state that the number of CS grads at Harvard is on the increase, but overall numbers are still low.

So why is there this decline? That’s not an easy question to answer, but I think we can rule out the idea that women are somehow inherently not suited for software development. History proves that idea wrong.

Ok fine, there’s less women in software for whatever reasons. Maybe they don’t want to be developers. Hard for me to believe as I think it’s the best goddamn profession ever. But let’s humor that argument just for a moment. Suppose that was true. Why is it a problem for our industry? I’ll name two reasons.

If you’re involved in an open source project, you’ve probably noticed that it’s really hard to find good contributors. So many projects are solitary labors of love. Well it turns out according this post, Sexism: Open Source Software’s Dirty Little Secret:

Asked to guess what percentage of FOSS developers are women, mostly people guess a number between 30-45%. A few, either more observant or anticipating a trick question after hearing the proprietary figure, guess 12-16%. The exact figure, though, is even lower: 1.5%

In other words, women’s participation in FOSS development is over seventeen times lower than it is in proprietary software development.

From a purely selfish standpoint, that’s a lot of potential developers who could be contributing to your project. Even if you don’t believe there’s rampant institutionalized sexism, why wouldn’t you want to remove barriers and create an environment that makes more contributors feel welcome to your project?

Oh, and just making your logo pink isn’t the way to go about it. Not that I have anything against pink, but simple stereotypical approaches won’t cut it. Really listen to the concerns of folks like Katie and try and address them.

I don’t mean to suggest you will get legions of female contributors overnight. This is a very complex problem and I have no clue how to fix it. I’m probably just as guilty as I can’t name a single female contributor to any of my projects, though I’ve tried my best to cajole some to contribute (you know who you are!). But a good first step is to remove ignorance and indifference to the topic.

We all know how hard it is to find good developers. In fact, while the recession saw high overall unemployment, that time was marked by a labor shortage of developers. So it comes as a surprise to me that employers tolerate a work environment that makes a large percentage of the potential workforce feel unwelcome.

According to this New York Times article written in 2010,

The share of women in the Silicon Valley-based work force was 33 percent, dropping down from 37 percent in 1999.

Note that it’s not just a gender issue.

Again, my point here isn’t to say “You should be ashamed of yourself for being sexist and racist!” Though if you are, you should be.

No, the point here is shift your perspective and look at the reality of the current situation we’re in, despite the reasons why it is the way it is. For whatever reasons, there’s a lot of people who might be great developers, but feel that our industry doesn’t welcome them. That’s a problem! And an opportunity!

It’s an opportunity to improve our industry! If we make the software industry a place where women and minorities want to work, we’ve increased the available pool of software developers. That not only means more quality developers to hire, it also means more diverse perspectives, which is important to creative thought and benefits the bottom line:

So a sociologist called Cedric Herring has just completed a very interesting study that obtained data from 250 representative companies in the United States that looked at both their diversity levels as well as various measures of business performance there. And he finds that with every successive level of increased diversity, companies actually appear to do better on all those measures of business performance.

So, what are brogrammers afraid of?

For the uninitiated, the term “brogrammer” is a recent term that describes a new breed of frat boy software developers that are representative of those who don’t see the need to attract more women and minorities to our industry.

Given the benefits we enjoy when we attract a more diverse workforce into software development, why is the attitude that we shouldn’t do anything to increase the numbers of women and minorities in our industry still prevalent?

It’s not an easy question to answer, but I did have one idea that came to mind I wanted to bounce off of you. Suppose we were successful at attracting women and minorities in numbers proportional to the make-up of the country. That would increase the pool of available developers. Would that also lower overall salaries? Supply and demand, after all.

I can see how that belief that might lead to fear and the attitude that we’re fine as it is, we don’t need more of you.

But at the same time, when you consider the talent shortage, I don’t believe this for one second. At this point, I don’t have any studies to point to, but I would welcome any links to evidence you can provide. But my intuition tells me that what would happen is it would simply decrease our talent shortage, but a shortage would still remain.

What would happen is we’d see the shakeout of bad programmers from the ranks.

Let’s face it, because of the talent shortage, there’s a lot of folks who are programmers who probably shouldn’t be. But for the majority of developers, I don’t think we have anything to fear. We should welcome the influx of new ideas and the overall improvement of our industry that more developers (and thus more better developers) bring. A rising tide lifts all boats as they say.

Now, I’m not sure this is the real reason these attitudes prevail. It sure seems awful calculating. I’m inclined to think it’s simple cluelessness. But it’s possible this is a subconscious factor.

Or perhaps it’s the fear that the influx of people from diverse backgrounds will require that they grow up, leave the trappings of their college behind, and become adults who know how to relate to people different than them.

I know this is a touchy subject. I want to make one thing very clear. My focus in this post was on arguments that don’t require one to believe there’s rampant sexism in the software industry. The arguments were mostly self-interest arguments in favor of changing the status quo.

I don’t claim there isn’t sexism. I believe there is. You can find lots of arguments that make a compelling case that institutionalized sexism exists and that it’s wrong. The point of this post is to provide food for thought for those who don’t believe there’s sexism. If we change the status quo, I believe attitudes will follow. They tend to follow one another with each leading the other at times.

In the end, it’s a complex problem and I certainly don’t claim to have the answers on solving it. But I think a good start is leaving behind the fear, acknowledging the issue, recognizing the opportunity to improve, and embracing the concrete benefits that diversification bring.

What do you think?