Given how central JavaScript is to many modern web applications,  it is important to use unit tests to drive the design and quality of that JavaScript. But I’ve noticed that there are a lot of developers that don’t know where to start. 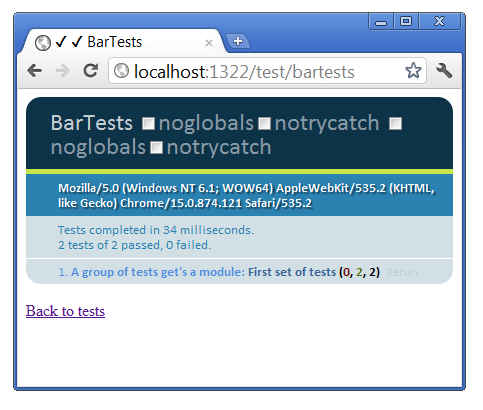 Most of my experience with QUnit is writing tests for a client script library such as a jQuery plugin. Here’s an example of one QUnit test file I wrote a while ago (so you know it’s nasty).

You’ll notice that the entire set of tests is in a single static HTML file.

I saw a recent blog post by Jonathan Creamer that uses ASP.NET MVC 3 layouts for QUnit tests. It’s a neat approach that consolidates all the QUnit boilerplate into a single layout page. This allows you to have multiple test files and duplicate that boilerplate.

But there was one thing that nagged me about it. For each new set of tests, you need to add an action method and a corresponding view. ASP.NET MVC does not allow rendering a view without a controller action.

The idea of controller-less views has been one tossed around by folks, but there are all sorts of design issues that come up when you consider it. For example, how do you request such a view directly? If you allow that, what if the view is intended to be rendered by a controller action. Now you have two ways to access that view, one of which is probably incorrect. And so on.

However, there is another lesser known framework (at least, lesser known to ASP.NET MVC developers) from the ASP.NET team that pretty much provides this ability!

It’s a product called ASP.NET Web Pages that is designed to appeal to developers who prefer an approach to web development that’s more like PHP or classic ASP.

Aside: I’d like to go on record and say I hated that name from the beginning because it causes so much confusion. Isn’t everything I do in ASP.NET a web page?

A Web Page in ASP.NET Web Pages (see, confusing!) uses Razor syntax inline to render out the response to a request. ASP.NET Web Pages also support layouts. This means we can create an approach very similar to Jonathan’s, but we only need to add one file for each new set of tests. Even better, this approach works for both ASP.NET MVC 3 and ASP.NET Web Pages.

The code to do this is straightforward. I just created a folder named test which will contain all my unit tests. I added an _PageStart.cshtml file to this directory that sets the layout for each page. Note that this is equivalent to the _ViewStart.cshtml page in ASP.NET MVCs.

The next step is to write the layout file, _Layout.cshtml. This contains the QUnit boilerplate along with a place holder (the RenderBody call) for the actual tests.

And now, one or more files that contain the actual test. Here’s an example called footest.cshtml.

You’ll note that I have this funky if (false) block in the code. That’s to workaround a current limitation in Razor so that JavaScript Intellisense for QUnit works in this file. If you don’t care for Intellisense, you don’t need it. I hope that in the future, Razor will pick up the script in the layout and you won’t need this either way.

With this in place, to add a new test with the proper QUnit boilerplate is very easy. Just add a .cshtml file, set the title for the tests, and then add the script you’re testing and the test script into the same file.

The last step is to create an index into all the tests. I wrote the following index.cshtml file that creates a list of links for each set of tests. It simply iterates through every test file and generates a link. One nifty little perk of using ASP.NET Web Pages is you can leave off the extension when you request the file.

The output of this page isn’t pretty, but it works. When I navigate to /test I see a list of my test files: 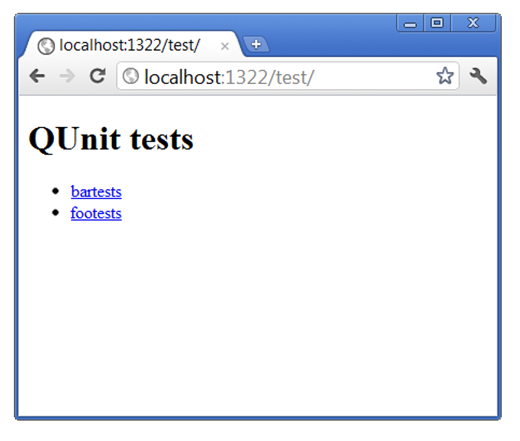 Here’s the contents of my test folder when I’m done with all this. 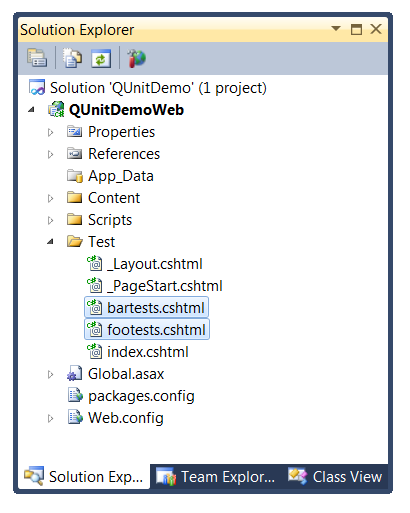 I personally haven’t used this approach yet, but I think it could be a nice approach if you tend to have more than one QUnit test file in your projects and you tend to customize the boilerplate for those tests.

I tend to just use a static HTML file, but so far, most of my QUnit tests are for a single JavaScript library. But this approach might come in handy when I get around to testing the JavaScript in the NuGet gallery.