Well the poll results are in and you all were very close! I was taken aback at the intensity of the interest in where I would end up. Seriously, I’m honored. But then I thought about it for a moment and figured, there must be a betting pool on this. These folks don’t care that much.

Today is my first day as a GitHub employee! In other words, I am now a GitHubber, a Hubbernaut, a GitHubberati. Ok, I made that last one up.

If you haven’t heard of GitHub, it’s a site that makes it frictionless to collaborate on code. Some would call it a source code hosting site, or a forge, but it goes way beyond that. Their motto is “Social Coding”, and they mean it. They’ve turned shipping software into a fun social activity. It’s great!

Beyond a great product, they’ve built a great company culture. From everything I’ve seen and read, GitHub has figured out how to make a great work environment. They optimize for happiness and I believe that’s resulted in a great product and a lot of success. I’ll talk about that some more another time. For now, let’s talk about…

What will I be doing at GitHub?

According to my offer letter, my title is “Windows Badass”, but the way I see it, I will do whatever I can to help GitHub be even more awesome. It’s going to take some creative thinking because it’s already pretty damn cool, but I’ll figure something out.  My first idea for adding more cowbell was rejected, but I’m just finding my footing. I’ll get the hang of it.

More specifically, I plan to help GitHub appeal to more developers who code for Windows and the .NET platform. For example, take a look at the TIOBE language index. 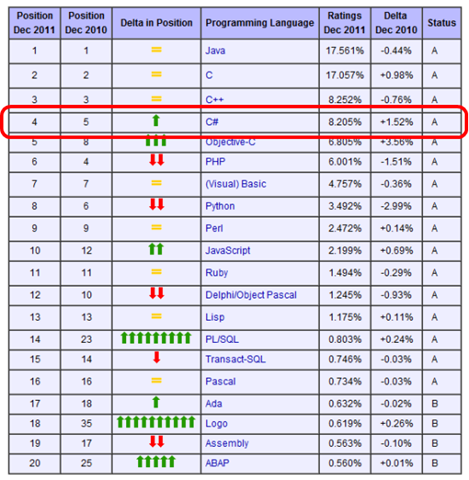 Now take a look at this chart from the GitHub languages page (no longer around).

See something missing? Yes, oh mah gawd! LOLCODE is not there!!!

Ok, besides that. See something else missing? Despite the fact that TIOBE ranks it as the fourth most popular language, C# doesn’t make it into the top ten at GitHub. I’d like to change that!

I’ve always been a big proponent of open source on .NET. Pretty much everything I worked on at Microsoft was or became open source (I did work on a Web Form control that wasn’t open sourced, but we don’t talk about that much).

I will continue to work to grow a healthy open source ecosystem on .NET and Windows. I hope to see more .NET developers contributing to open source and doing it on GitHub.

This might include making the website more friendly to Windows developers, working on a Windows client for GitHub, and continuing to work on NuGet, among other things. One of the appealing aspects of GitHub to me was how much they got NuGet. Perhaps more so than many at Microsoft.

Well, there’s the simple business answer. The more open source developers there are, the more potential customers GitHub has. But we have larger aspirations than that as well.

When trying to build a case for releasing more software as open source at Microsoft, I once asked Miguel de Icaza, what’s in it for Microsoft? Why do it?

His response was something along the lines of bla bla bla bla. But there was one thing that he said that struck me.

A rising tide lifts all boats.

When I first read that, I thought he wrote “tilde” and I was really confused what a rising tilde had to do with anything.

But it makes sense to me now. As I wrote in a recent post talking about software communities,

The interchange of ideas between these disparate technology communities can only result in good things for everyone.

There are millions of .NET developers, but a disproportionately small number of them are involved in open source projects. If we increase that just a tiny bit, that increases the pool of ideas floating around in the larger software community. Ideas backed by code that anybody can look at, incorporate, tweak.

The nice thing here is I think a healthy .NET OSS ecosystem is a good thing for everyone. Good for GitHub. Good for Microsoft. Good for the software industry.

GitHub is located in an amazing space in San Francisco. When I visited, Hubot pumped in Daft Punk via overhead speakers as people coded away. That alone nearly sealed the deal for me. The fine scotch we sipped as we talked about software didn’t hurt either.

But alas, as much as San Francisco is a great city, my family and I love it here in the Washington, so I will work as a remote employee. Fortunately, GitHub is well suited for remote employees. And this gives me a great excuse to visit SF often!

My little octocats agree, this is a good thing. 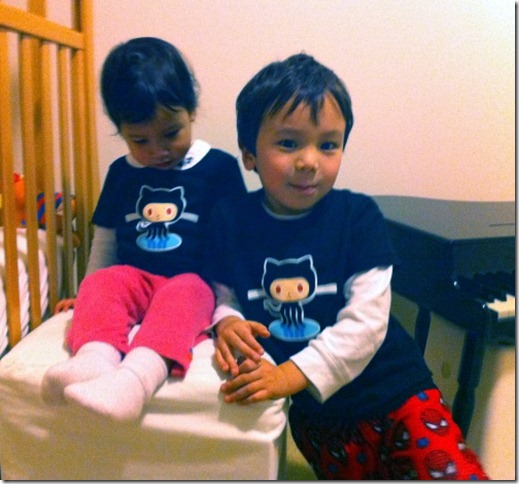 If you’ve been a fan of my blog or Twitter account, I hope you stick around. I’ll still be blogging about ASP.NET MVC, NuGet, etc. But you can expect my blog will also expand to cover new topics.

It’ll be an adventure.