Well, as I wrote before, today is my last day at Microsoft. Last night we had our office Holiday party in the observation deck and lounge of the Space Needle. The party was just fantastic and we were lucky to have a nice clear evening with spectacular views. What a great way to go!

I had a brief exit interview where I handed over my badge with an air of finality. However, I am still an employee until midnight tonight. So it’s not so final just yet. Which is a good thing as the NuGet team is working to deploy the new NuGet.org gallery tonight if all goes well. Once that’s been up for a few days and we’re comfortable with it being stable, we’ll release NuGet 1.6. 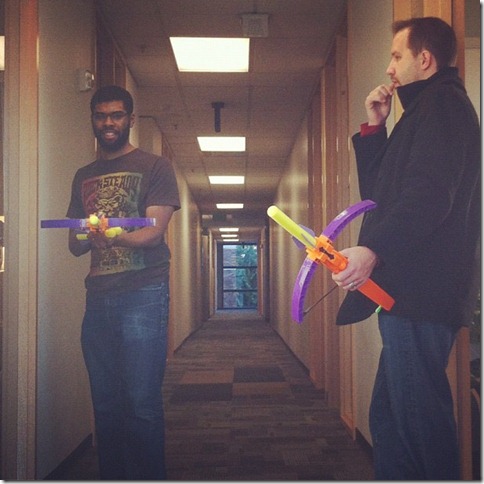 In the meanwhile, my office has been razed of all the good equipment including my crossbows that I bequeath to my co-workers that remain, much as they had been bequeathed unto me. Here, you can see a shot of my co-workers taking shots at me. Yes, that’s David Fowler of SignalR and JabbR fame, and Scott Hanselman, of the fivehead fame who needs no introduction.

I will miss working with all of my friends at Microsoft dearly, but seriously, I live 2 miles away, so don’t be a stranger all of a sudden. And to all of you who have supported me at Microsoft via comments on my blog, tweets on Twitter, and other encouraging means. Thank you!

But just because I’m leaving, that doesn’t mean you have to leave too. I’ll still be blogging here and tweeting on Twitter so do stick around as I begin my new journey at GitHub!