I like to live life on the wild side. No, I don’t base jump off of buildings or invest in speculative tranches made up of junk stock derivatives. What I do is attempt to run recurring background tasks within an ASP.NET application. 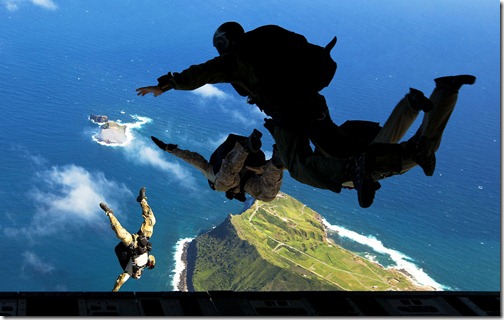 Writing code is totally just like this - Photo by DVIDSHUB – CC BY 2.0

But before I do anything wild with ASP.NET, I always talk to my colleague, Levi (sadly, no blog). As a developer on the internals of ASP.NET, he knows a huge amount about it, especially the potential pitfalls. He’s also quite the security guru. As you read this sentence, he just guessed your passwords. All of them.

When he got wind of my plan, he let me know it was evil, unsupported by ASP.NET and just might kill a cat. Good thing I’m a dog person. I persisted in my foolhardiness and suggested maybe it’s not evil, just risky. If so, how can I do it as safely as possible? What are the risks?

There are three main risks, one of which I’ll focus on in this blog post.

It’s this last risk that is the focus of this blog post.

There are several things that can cause ASP.NET to tear down your AppDomain.

If any of these happen in the middle of your code execution, your application/data could be left in a pretty bad state as it’s shut down without warning.

So why isn’t this a problem for your typical per request ASP.NET code? When ASP.NET tears down the AppDomain, it will attempt to flush the existing requests and give them time to complete before it takes down the App Domain. ASP.NET and IIS are considerate to code that they know is running,such as code that runs as part of a request.

Problem is, ASP.NET doesn’t know about work done on a background thread spawned using a timer or similar mechanism. It only knows about work associated with a request.

The good news is there’s an easy way to tell ASP.NET about the work you’re doing! In the System.Web.Hosting namespace, there’s an important class, HostingEnvironment. According to the MSDN docs, this class…

Places an object in the list of registered objects for the application.

For us, what this means is that the RegisterObject method tells ASP.NET that, “Hey! Pay attention to this code here!” Important! This method requires full trust!

This method takes in a single object that implements the IRegisteredObject interface. That interface has a single method:

When ASP.NET tears down the AppDomain, it will first attempt to call Stop method on all registered objects.

In most cases, it’ll call this method twice, once with immediate set to false. This gives your code a bit of time to finish what it is doing. ASP.NET gives all instances of IRegisteredObject a total of 30 seconds to complete their work, not 30 seconds each. After that time span, if there are any registered objects left, it will call them again with immediate set to true. This lets you know it means business and you really need to finish up pronto! I modeled my parenting technique after this method when trying to get my kids ready for school.

For example, here’s a simple generic implementation of IRegisteredObject. In this implementation, I simply ignored the immediate flag and try to prevent the method from returning until the work is done. The intent here is I won’t pass in any work that’ll take too long. Hopefully.

I wanted to get the simplest thing possible working. Note, that when ASP.NET is about to shut down the AppDomain, it will attempt to call the Stop method. That method will try to acquire a lock on the _lock instance. The DoWork method also acquires that same lock. That way, when the DoWork method is doing the work you give it (passed in as a lambda) the Stop method has to wait until the work is done before it can acquire the lock. Nifty.

Later on, I plan to make this more sophisticated by taking advantage of using a Task to represent the work rather than an Action. This would allow me to take advantage of task cancellation instead of the brute force approach with locks.

With this class in place, you can create a timer on Application_Start (I generally use WebActivator to register code that runs on app start) and when it elapses, you call into the DoWork method here. Remember, the timer must be referenced or it could be garbage collected.

Here’s a small example of this:

This technique can make your background tasks within ASP.NET much more robust. There’s still a chance of problems occurring though. Sometimes, the AppDomain goes down in a more abrupt manner. For example, you might have a blue screen, someone might trip on the plug, or a hard-drive might fail. These catastrophic failures can take down your app in such a way that leaves data in a bad state. But hopefully, these situations occur much less frequently than an AppDomain shutdown.

Many of you might be scratching your head thinking it seems weird to use a web server to perform recurring background tasks. That’s not really what a web server is for. You’re absolutely right. My recommendation is to do one of the following instead:

Given that those are my recommendations, why am I still working on a system for scheduling recurring tasks within ASP.NET that handles web farms and AppDomain shutdowns I call WebBackgrounder (NuGet package coming later)?

I mean, besides the fact that I’m thick-headed? Well, for two reasons.

The first is to make development easier. When you get latest from our source code, I just want everything to work. I don’t want you to have to set up a scheduled task, or an Azure worker, or a Windows server on your development box. A development environment can tolerate the issues I described.

The second reason is for simplicity. If you’re ok with the limitations I mentioned, this approach has one less moving part to worry about when setting up a website. There’s no need to configure an external recurring task. It just works.

But mostly, it’s because I like to live life on the edge.