Today, October 15 2011, marks four years of being a Microsoft employee for me. As such, it’s time for a little introspection, but in many ways, Tim Heuer already introspected for me. Much of what he writes echoes my own experience, thus leaving me with less to write about. 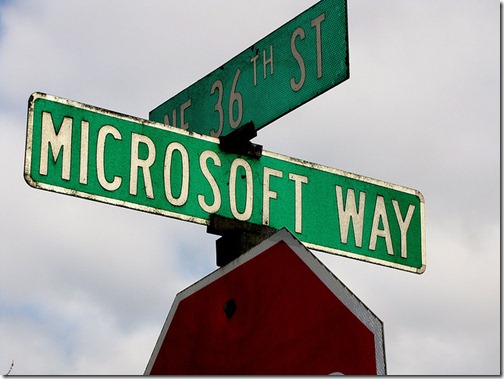 It’s the Microsoft way, or the highway. Which is conveniently located near Microsoft Way. - Photo by Todd Bishop, CC BY 2.0

Looking back in my archives, I realized I haven’t written a whole lot about what it’s like to work here. I do have a few posts such as…

Regarding the second post, the funny thing is you never stop drinking from the fire hose here. At least I haven’t yet. And that’s both a good thing, but it can be wearying at times. I’ve been taking a lot of mini-vacations lately to keep my sanity.

So far, the past four years have been a real blast.

I’ve had a passion for open source for a very long time. When I started, ASP.NET MVC 1.0 was just getting going as a proprietary project. Very few teams at that time released their source code, much less under a proper OSS license. Although it involved sitting in a lot of meetings with lawyers, reviewing lots of dry legal documents, I loved the opportunity to help drive the process to get ASP.NET MVC licensed under the Ms-PL, a liberal OSI certified open source license. Announcing that release was a happy day for me.

Since that time, we’ve shipped four RTM releases of ASP.NET MVC (recall that we released ASP.NET MVC 3 twice), each incorporating more and more third-party open source software, another milestone. As they say, shipping is a feature! And the ASP.NET team, and the MVC team in particular, are all really great people to work with. Hat tip to them all!

In this time, I’ve also had the great pleasure to work on NuGet from its inception. NuGet goes one step further in that it’s not only an open source project under the Apache v2 license, but it accepts contributions. Microsoft contributed NuGet to the Outercurve Foundation (an independent open source foundation not unlike the Apache and Eclipse foundation that recently received its non-profit status!) early in its life allowing it to flourish as an open source project.

Microsoft has a team of employees who are allowed to spend work-time contributing to the NuGet project. All development, issue tracking, and discussion occurs in a public location, the NuGet CodePlex site, with Mercurial (hg) as the source code repository.

The NuGet team is a dedicated group of folks and it’s really a joy to work with them. The community involvement and feedback has been tremendous. I used to tell folks that I wanted to work on open source as my day job. That wish came true. It’s a real joy.

The past four years have also had their fair share of challenges behind the scenes. When you work with the intensely smart folks that I have the pleasure to work with, it’s hard not to feel the effects of the Impostor Syndrome, as Hanselman writes.  And with everything I work on, I have a keen eye for all the shortcomings and faults in what we produce. I find it hard to tout our releases as much as I could because I always wish we could have done better. Perhaps because I’m a perfectionist, but more likely due to my half-Asian upbringing. I’m forced to find fault in everything.

Despite all that, I do take pride in the great work that the teams I work with have done. Their efforts have been tremendous and they deserve all the credit. I only hope my contributions were indeed contributions and not just overhead.

And I want to thank many of you, who’ve offered us encouragement and constructive criticism via Twitter, your blogs, my blog, our forums, StackOverflow, and so on. All of it is very much appreciated! Without your help, I don’t think I would have done as well in the past year. Don’t be surprised when I come knocking on your door asking for more help. Did I mention already that NuGet accepts contributions?