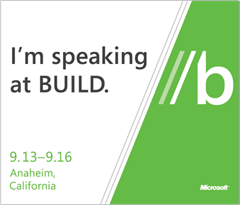 If you’re at the BUILD conference in Anaheim, I’ll be speaking in two sessions on Thursday.

There are over a billion mobile devices with rich Web capabilities, yet many Websites look terrible on such devices, or worse, fail to work at all. As mobile devices become the primary way that most people access the Web, having a site that fails to deliver a rich experience on the Web using HTML5, JavaScript and jQuery Mobile is missing out on a huge opportunity. In this session, learn how ASP.NET MVC 4 leverages these next generation technologies enabling developers to build a single solution that targets multiple platforms and form factors such as mobile, tablet, and desktop devices.

UPDATE: Unfortunately, we had to cancel the second talk due to a family illness which required that Damian go home early. Damian and I plan to record the session later and post it on Channel 9.The second talk is a joint talk with Damian Edwards.

Building IIS and ASP.NET apps with the power of asyncThursday, 2:30 PM

It’s well established from both theory and practice that Web sites and Web services achieve scale through asynchrony. If a dedicated thread is required per client connection to a server, scalability becomes limited by the number of threads the server system can support, which is typically far fewer than business requirements demand. Unfortunately, it’s also been difficult historically for developers to write asynchronous apps, due to the myriad of callbacks that have been necessary to program asynchrony successfully. Thus, businesses scale by investing in many more machines rather than by making better use of the ones they already have or the few they’re paying for use of in the cloud. All that changes with the next release of Visual Studio and .NET. New features in managed languages make writing asynchronous code as simple as writing synchronous code, thereby enabling both developer productivity and good return on investments. In this code-heavy session, learn how you can be the hero of your organization, building efficient and scalable server apps that best utilize your company’s resources.

If you’re here, I hope you can make it. I’ll be giving out NuGet stickers at my sessions.