One aspect of my job that I love is being able to go in front of other developers, my peers, and give presentations on the technologies that my team and I build. I’m very fortunate to be able to do so, especially given the intense stage fright I used to have. 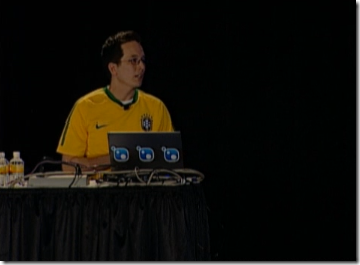 But over time, through giving multiple presentations, the stage fright has subsided to mere abject horror levels. Even so, I’m still nowhere near the numbers of much more polished and experienced speakers such as my cohort, Scott Hanselman.

Always looking for the silver lining, I’ve found that my lack of raw talent in this area has one great benefit, I make a lot of mistakes. A crap ton of them. But as Byron Pulsifer says, every mistake is a an “opportunity to learn”, which means I’m still cramming for that final exam.

At this past Mix 11, I made several learning opportunities in my first talk that I was able to capitalize on by the time my second talk came around.

I thought it might be helpful for my future self (and perhaps other budding presenters) if I jotted down some of the common mistakes I’ve made and how I attempt to mitigate them.

Have a Backup For Everything!

An alternative title for this point could be worry more! I tend to be a complete optimist when it comes to preparing for a talk. I assume things will just work and it’ll generally work itself out and this attitude drives Mr. Hanselman crazy when we give a talk together. This attitude is also a setup for disaster when it comes to giving a talk.

During my talk, there were several occasions where I fat-fingered the code I was attempting to write on stage in front of a live audience. For most of my demos, I had snippets prepared in advance. But there were a couple of cases where I thought the code was simple enough that I could hack it out live.

You never know when nervousness combined with navigating a method that takes a Func-y lambda expression of a generic type can get you so lost in angle brackets you think you’re writing XML. I had to delete the method I was writing and start from scratch because I didn’t create a snippet for it, which was my backup for other code samples. This did not create a smooth experience for people attending the talk.

Another example of having a backup in place is to always have a finished version of your demo you can switch to and explain in case things get out of control with your fat fingers.

For every demo you give, think about how it could go wrong and what your backup plan will be when it does go wrong.

Minimize Dependencies Not Under Your Control

In my ASP.NET MVC 3 talk at Mix, I tried to publish a web application to the web that I had built during the session. This was meant to be the finale for the talk and would allow the attendees to visit the site and give it a spin.

It’s a risky move for sure, made all the more risky in that I was publishing over a wireless network that could be a bit creaky at times.

Prior to the talk, I successfully published multiple times in preparation. But I hadn’t set up a backup site (see previous mistake). Sure enough, when the time came to do it live with a room full of people watching, the publishing failed. The network inside the room was different than the one outside the room.

If I had a backup in place, I could have apologized for the failure and sent the attendees to visit the backup site in order for them to play with the finished demo. Instead, I sat there, mouth agape, promising attendees that it worked just before the talk. I swear!

Your audience will forgive the occasional demo failure that’s not in your control as long as the failure doesn’t distract from the overall flow of the presentation too much and as long as you can continue and still drive home the point you were trying to make.

This tip is closely related to and follows up on the last tip. While at Mix, I learned how big keynotes, such as the one at Mix, are produced. These folks are Paranoid with a capital “P”! I listened intently to them about the level of fail safes they put in place for a conference keynote.

For example, they often re-create local instances of all aspects of the Internet and networking they might need on their machine through the use of local web servers, HOST files, local fake instances of web services, etc.

Not only that, but there is typically a backup person shadowing what the presenter is doing on another machine. But this person is following along the demo script carefully. If something goes wrong with the presenter’s demo, they are able to switch a KVM script so that the main presenter is now displaying and controlling the backup machine, while the shadow presenter now has the presenter’s original machine and can hopefully fix it and continue shadowing. Update:Scott Hanselman posted a video of behind-the-scenes footage from Mix11 where he and Jonathan Carter discuss keynote preparations and how the mirroring works.

I’m not suggesting you go that far for a standard break-out session. But faking some of your tricky dependencies (and having backups) is a very smart option.

Sometimes, a little smoke and mirrors is a good backup

In our following NuGet talk the next day, Scott and I prepared a demo in which I would create a website to serve up NuGet packages, and he would going visit the site to install a package.

We realized that publishing the site on stage was too risky and was tangential to the point of our talk, so we did something very simple. I created the site online in advance at a known location, http://nuget.haacked.com/. This site would be an exact duplicate of the one I would create on stage.

During the presentation, I built the site on my local machine and casually mentioned that I had made the site available to him at that URL. We switched to his computer, he added that URL to his list of package sources, and installed the package.

The point here is that while we didn’t technically lie, we also didn’t tell the full story because it wasn’t relevant to our demo. A few people asked me afterwards how we did that, and this is how.

I would advise against using smoke and mirrors for your primary demo though! Your audience is very smart and they probably wouldn’t like it the key technology you’re demoing is fake.

This goes without saying, but is sometimes easier said than done. I highly recommend at least one end-to-end walkthrough of your talk and practice each demo multiple times.

The following screenshot depicts a page of chicken scratch from Scott Hanselman’s notebook where we planned out the general outline of our talk.

I took these notes, typed them up into an orderly outline, and printed out a simple script that we referred to during the talk to make sure we were on the right pace. Scott also makes a point to mark certain milestones in the outline. For example, we knew that around the 45 minute mark, we had better be at the AddMvcToWebForms demo or we were falling behind.

For my first talk, I never had the opportunity to do a full dry-run. I can make a lot of excuses about being busy leading up to the conference, but in truth, there is no excuse for not practicing the talk end to end at least once.

When you do a dry run, you’ll find so many issues you’ll want to streamline or fix for the actual talk. Trust me, it’s a lot better to find them during a practice run than during a live talk.

Don’t change anything before the talk

Around the Around 24:40 mark in our joint NuGet in Depth session, you can see me searching for a menu option in the Solution Explorer. I’m looking for the “Open CMD Prompt Here” menu, but I can’t find it.

It turns out, this is a feature of the Power Commands for Visual Studio 2010 VSIX extension. An extension I had just uninstalled on the suggestion from my speaking partner, Mr. Hanselman. Just prior to our talk, he suggested I disable some Visual Studio extensions to “clean things up”

I had practiced my demos with that extension enabled so it threw me off a bit during the talk (Well played Mr. Hanselman!). The point of this story is you should practice your demo in the same state as you plan to give the demo and don’t change a single thing with your machine before giving the actual talk.

I know it’s tempting to install that last Window Update just before a talk because it keeps annoying you with its prompting and what could go wrong, right? But resist that temptation. Wait till after your talk to make changes to your machine.

This post isn’t meant to be an exhaustive list of presentation tips. These are merely tips I learned recently based on mistakes I’ve made that I hope and plan to never repeat.