If you don’t see any updates, make sure to enable automatic detection of available updates.

If you are running VS 2010 SP1 Beta, you might run into the following error message when attempting to upgrade to NuGet 1.1 if you have an older version installed.

The workaround is to simply uninstall NuGet and then install it from the VS Extension Gallery.

If you don’t have NuGet installed, click the Online tab and type in “NuGet” (sans quotes) to find it.

The VSIX and updated command line tool (used to create and publish packages) is also available on CodePlex.com.

Much of the work in this release was focused on bug fixes. Now that CodePlex.com supports directly linking to filtered views of the issue tracker, I can provide you a link to all the issues fixed in 1.1.

In this post, I’ll highlight some of the new features.

One of the first changes you might notice is that we have a new tab in the dialog that shows packages that you’ve installed recently. Click the screenshot below for a larger view. 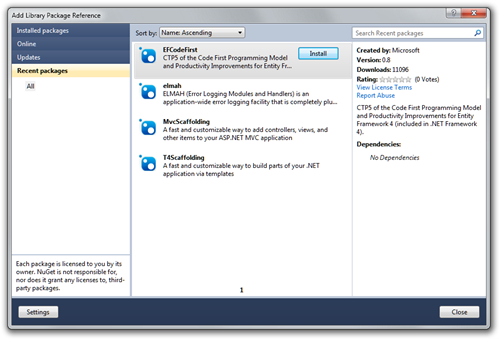 The recent packages shows the last 20 packages that you’ve directly installed. This often comes in handy when you tend to use the same packages over and over again in multiple projects. Right now, the list simply shows the most recently used, but there has been discussion about perhaps changing the behavior to sort by the packages used most often. Feel free to chime in if you want the behavior changed.

By the way, you can also use the Powershell within the Package Manager Console to get this same information with the –Recent flag to Get-Package. 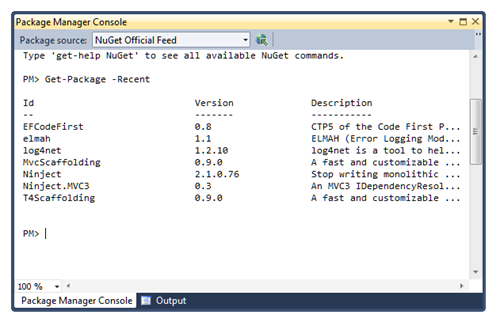 When you install a package, you’ll now notice a progress bar dialog that shows up with output from installing the package. 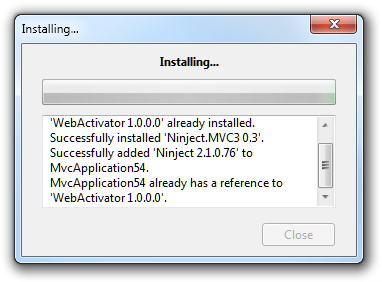 The dialog is meant to give an indication of progress, but also gets out of your way immediately when the installation is complete so you’re not stuck clicking a bunch of Close buttons. But what happens if you actually want to review that output? 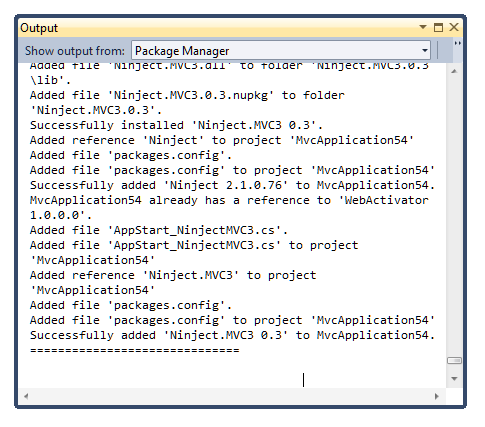 This allows you to review what changes a package made at your leisure after the fact.

NuGet 1.1 includes an update to our dependency resolution algorithm which is described in David Ebbo’s blog post on this topic in the section titled “NuGet 1.1 twist”.

If you are using F#, this one’s for you.

We also now execute commands within the Powershell Console asynchronously. This means that a long running command won’t freeze the rest of Visual Studio while it runs.

There were a lot of other tweaks, bug fixes, and minor improvements that were not worth mentioning here, but they are all listed in our release notes.

There are some minor changes that hopefully won’t break 99.9% of you. If you recall, we made our PowerShell scripts fit with PowerShell conventions. If you have a package that calls one of these methods, your package might need to be updated.Here’s the list of changes we made:

Our hope is to have a monthly point release, though we may adjust some iterations to be longer as needed. To see what we’re planning for the 1.2 release, check out this link of issues for 1.2 (note that by the time you read this, some of these features might already be implemented). We’re constantly refining our planning so nothing is set in stone.

For a small taste of what’s coming in 1.2, check out this video by David Ebbo showing a streamlined workflow for creating packages.

I bet many of you have some great ideas on what we should and shouldn’t do for NuGet. We’d love to have you come over and share your great ideas in our discussion list. Or if you’re looking for other ways to contribute, check out our guide to contributing to NuGet.