Almost exactly one month ago, we released the Release Candidate for ASP.NET MVC 3. And today we learn why we use the term “Candidate”.

As Scott writes, Visual Studio 2010 SP1 Beta was released just this week and as we were testing it we found a few incompatibilities with it and the ASP.NET MVC 3 RC that we had just released.

That’s when we, in the parlance of the military, scrambled the jets to get another release candidate prepared.

You can install it directly using the Web Platform Installer (Web PI) download the installer yourself from from here.

Be sure to read the release notes for known issues and breaking changes in this release. I’m not saying I put an Easter egg in there or not, but you’ll have to read all the notes to find out.

In particular, there are two issues I want to call out.

The first is a breaking change. Remember way back when I wrote about Dynamic Methods in ViewData? Near the end of that post I wrote an Addendum about the property name mismatch between ViewModel and View.

Well we finally resolved that mismatch. The new property name, both in the controller and in the view is ViewBag. This may break many of your existing ASP.NET MVC 3 pre-release applications.

The other issue I want to call out is that if you already have NuGet installed, running the ASP.NET MVC 3 RC 2 installer will not upgrade it. Instead, you need to go to the Visual Studio Extension Manager dialog (via the Tools | Extensions menu option) and click on the Updates tab. You should see NuGet listed there (click on image for larger image): 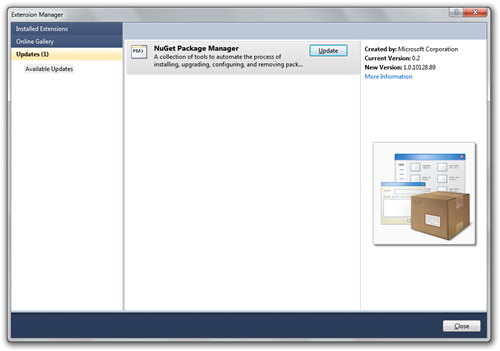 The NuGet.exe command line tool for creating packages is available on CodePlex.

Overall, this release consists mostly of bug fixes along with some fit and finish work for ASP.NET MVC 3. We’ve updated the version of jQuery and jQuery Validation that we include in the project templates and now also include jQuery UI, a library that builds on top of jQuery to provide animation, advanced effects, as well as themeable widgets.

In terms of NuGet, this release contains a significant amount of work. I’ll try and follow up soon with more details on the NuGet release along with release notes.