It was a dark and stormy coding session; the rain fell in torrents as my eyes were locked to two LCD screens in a furious display of coding … 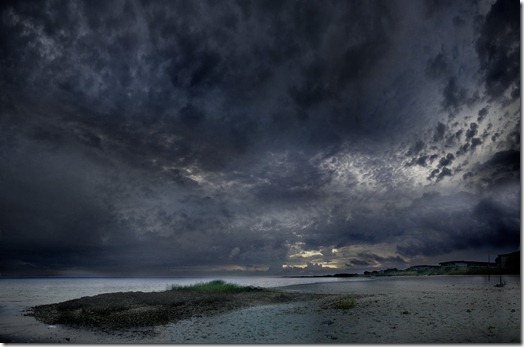 …sorry sorry, I just can’t continue. It’s all a lie.

This actually a cautionary tale describing one subtle way that you can run afoul Code Access Security (CAS) when attempting to run an application in partial trust. But who wants to read about that? Right? Right?

I was hacking on NuGet the other day and all I wanted to do was write some code that accessed the version number of the current assembly. This is something we do in Subtext, for example. If you scroll to the very bottom of the admin section, you’ll see the following.

As you can imagine, the code for to get the version number is very straightforward:

Or is it!? (cue scary organ music)

What the code does here (besides appearing to smack the Law of Demeter in the mouth) is get the currently executing assembly. From that it gets the Assembly name and extracts the version from the name. What could go wrong? I tested this in medium trust and it received the “works on my machine” seal of approval! 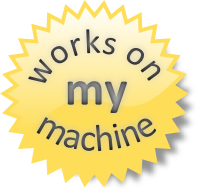 But does it work all the time? Well if it did, I wouldn’t be writing this blog post would I?

Fortunately, my colleague David Fowler caught this latent bug during a code review. Levi (no blog) Broderick was brought in to help explain the whole issue so a dunce like me could understand it. These two co-workers are scary smart and must never be allowed to fall into a life of crime as they would decimate the countryside. Just letting you know.

As it turns out, code exactly like this was the source of a medium trust bug in ASP.NET MVC 2 (that we fortunately caught and fixed before RTM). So what gives?

Well there’s very subtle latent bug with this code. To illustrate, I’ll put the code in context. The following snippet is a class library that makes use of the code I just wrote.

We need an application to reference that code. The following is code for an ASP.NET MVC controller with an action method that calls the method in the class library and returns it as a string. It may seem odd that the action method returns a string rather than an ActionResult, but that’s allowed. ASP.NET MVC simply wraps it in a ContentResult.

When I run this application and visit /Home/ClassLibAssemblyVersion everything works fine and we see the version number.

Now’s where the party gets a bit wild (but still safe for work). At this point, I’ll put the class library assembly in the GAC and then recompile the application. I’m going to assume you know how to do that. Note that I’ll need to remove the local copy of the class library from the bin directory of my ASP.NET MVC application and also remove the project reference and replace it with a GAC reference.

When I do that and run the application again, I get. 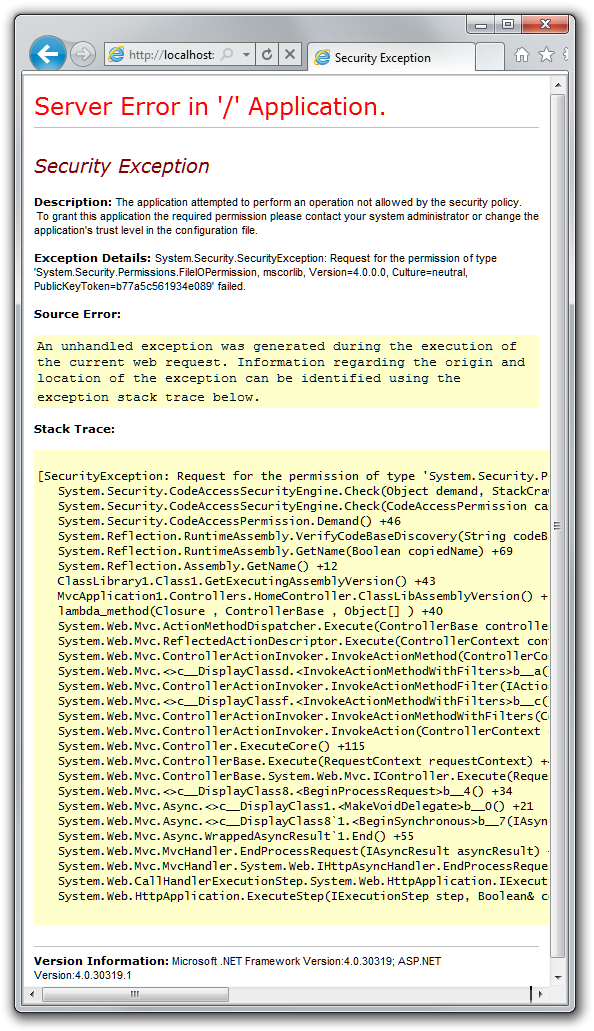 So what happened here? Reflector to the rescue! Looking at the stack trace, let’s dig into RuntimeAssembly.GetName(Boolean copiedName) method.

I’ve snipped out some code so we can focus on the interesting part. This method wants to return a fully populated AssemblyName instance. One of the properties of AssemblyName is CodeBase, which is a path to the assembly.

Once it has this path, it attempts to verify the path by calling VerifyCodeBaseDiscovery. Let’s take a look.

Notice that last line of code? It’s making a security demand to check if you have path discovery permissions on the specified path. That’s what’s failing. Why?

Well before you put the assembly in the GAC, the assembly was being loaded from your bin directory. Naturally, even in medium trust, you have rights to discover that path. But now that the class library is in the GAC, it’s being loaded from a subdirectory of c:\Windows\Assembly and guess what. Your medium trust application doesn’t have path discovery permissions to that directory.

As an aside, I think it’s too bad that this particular property doesn’t check its security demand lazily. That would be my kind of property access. My gut feeling is that people don’t often ask for an assembly’s Codebase as much as they ask for the other “safe” properties, like Version!

So how do we fix this? Well the answer is to construct our own AssemblyName instance.

This implementation avoids the security issue I mentioned earlier because we’re generating the AssemblyName instance ourselves and it never has a reference to the disallowed path.

If you want to see this in action, I put together a little demo showing the bad approach and the fixed approach.

You’ll need to GAC the ClassLibrary1 assembly to see the exception occurred. I have another action that has the safe implementation. Try it out.

As a tangent, the astute reader may have noticed that I used the assembly level SecurityTransparentAttribute in my class library. Is that a case of my assembly attempting to deal with self esteem issues and shying away from a clamoring public? Why did I put that attribute there? The answer to that, my friends, is a story for another time.