Last week I spent a few days in Las Vegas attending the Mix 10 conference. Mix is billed as …

A 3 day conference for web designers and developers building the world’s most innovative web sites.

Which certainly reflects its origins as a conference focused on the web and web standards. But this year, it seemed that the scope for Mix was expanded to be about, well, a Mix of technologies as the Windows Phone 7 series figured prominently at the conference. 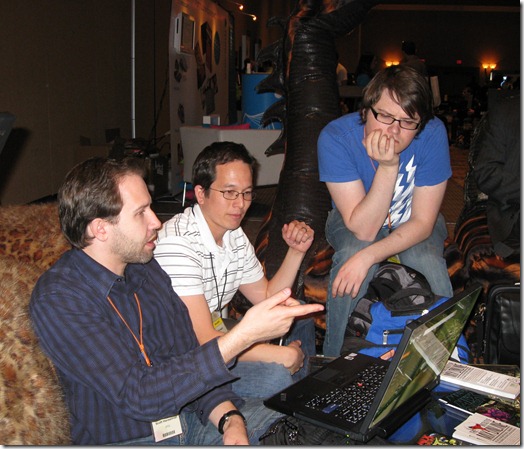 One aspect I love about Mix is it’s also a Mix of communities. Sure, it’s heavily Microsoft dominated, since it is, well, Microsoft that puts it on, but this conference has never been shy about bringing in people outside of the Microsoft community to speak.

One of the speakers I was excited to finally meet in person was John Resig, the creator of the very popular jQuery JavaScript library seen in the above photograph to the right. Yes, for those of you amongst the humor impaired, the caption is a joke (thanks to Peter Kellner who took the photo).

Preach it brother Crockford! Since I was able to chat with him in person, I confirmed it was really Douglas who left this comment on my JSON post suggesting that requiring POST was a good change to the JsonResult in ASP.NET MVC 2. I really enjoyed having the opportunity to chat with him about security and JSON.

I presented two sessions (click on the title for the video).

Come see and hear about the latest innovations in ASP.NET MVC 2 and the tooling support in Microsoft Visual Studio 2008 and 2010. We introduce you to a range of productivity (and extensibility) enhancements such as template helpers, model validation, and the new “Areas” feature, which enhances the team development of large websites. With template helpers you can get your website up and running for any data entity type without having to create UI. With improved server side validation and brand new client side validation support, your business data model can define the behavior of your application automatically. All this and more!

The HaaHa brothers take turns implementing features on an ASP.NET MVC website. Scott writes a feature, and Phil exploits it and hacks into the system. We analyze and discuss the exploits live on stage and then close them one by one. Learn about XSS, CSRF, JSON Hijacking and more. Is *your* site safe from the Haack?

For those interested in seeing the decks, trying out the code, and perhaps reading the checklist I use for my demos (the checklist is there to help in case I freeze from stage fright), I’ve made them all available for these two talks in a single zip file.

For the most part, I thought the talks went well, despite some technical difficulties. During my first talk, despite my preparation, I had a demo go wrong due to what I later realized was a comedic chain of errors.

You can probably see the surprise and then concern on my face as my big TADA moment where I show the feature working fails to materialize. ;) At least I was able to recover from this demo failure with the help of the audience. Scott and I had a demo failure where I had the wrong version of an app in our machines so we had to tap dance around that failure.

If you missed it, one of the big announcements (at least big to me as an open source guy) was that Microsoft is going to focus on investing in jQuery as our primary technology for client browser scripting. Part of this includes contributing back to jQuery, though any contributions we supply will go through the same approval process as any contribution from any other contributor would. No special treatment as far as I know.

I’m very excited about this as it’s been a long time coming. Stephen Walther has more details on his blog post, Microsoft, jQuery, and Templating.

The attendee party this year was held at LAX in the Luxor. It was a nice venue except it didn’t have any sort of outdoor patio you could escape to get a breath of fresh air like there was at TAO.

Even so, we had a great time there and you can see many of the pics from the Mix10 flickr set. Afterwards, several of us went to Pure at Ceasars. When we got there, there was a huge line of beautiful people. However, we were able to go up to the rope, show the stamps from the attendee party, and the bouncers waved us right in. It was the total rockstar treatment, which was a lot of fun. I can only imagine the thoughts going through the heads of all those people waiting in line wondering who the heck are these nerds and why are they getting the VIP treatment? :)

All in all, it was a great conference. I always manage to have a good time in Las Vegas, even when losing a bit of money at Poker. I met countless people, many with interesting questions on ASP.NET MVC. If I forget your name the next time I see you, I apologize in advance. Don’t be shy in reminding me. :)