If there’s one impression that Austin left on me, besides the one that Rudy’s “extra moist” barbecue left on my gut, is that it’s a developer friendly town.

This past week I spent three days in Austin meeting with all sorts of developers and had many great conversations about technology. I met with companies and people with a passion for technology that couldn’t be suppressed. 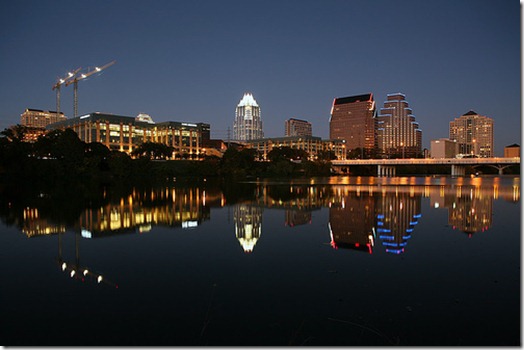 The reason I was in town was to give a couple of presentations at a mini-conference for Dell employees. On my first day in Austin, the day before the conference, I met with a team working on the next generation of Dell.com. The site is undergoing a large scale rearchitecture based heavily on ASP.NET MVC 2.

I should mention that Dell is hiring in a big way. Many of these positions will involve a lot of ASP.NET MVC development.

We’re looking for senior level folks that have extensive e-commerce experience, are experts in Microsoft technologies (MVC knowledge a big plus), and have worked on some very large sites.  We’re looking for architects, dev leads, business analysts and project managers.  We have positions open in Round Rock, Tx (just north of Austin) as well as Bangalore, India.  Visit www.dell.com and click on Careers at the bottom of the page.

After meeting with Dell, I was whisked over to the Austin .NET User Group meeting (ADNUG) where I gave a presentation on what’s new in ASP.NET MVC 2. The room was packed and the attendees were engaged with the talk. They had to be as my demos were failing left and right and I needed the help from the audience to catch my mistakes several times. Thank you ADNUG!

Afterwards I went with several user group attendees and was treated to Rudy’s Country Store and Bar-B-Q which is a gas station, convenience store, and Bar-B-Q shack. I would soon learn that Austin is full of these multi-function restaurants. I ordered the “Extra Moist” and some cream corn which was oh so delicious!

After Rudy’s I spent the evening working on digestion and my demos. The next morning I spent the day at a small conference center presenting two talks to Dell employees, the intro talk I mentioned earlier and an ASP.NET MVC 2 Tips and Tricks talk.

This time, both talks went much more smoothly and I now feel much more prepared for the upcoming Mix 10.

After my talks at Dell, Jonathan Carter and I headed over to the WhipIn to meet up with the quiet and always subdued Scott Bellware. The WhipIn is a convenience store, bar, and Indian food restaurant with a slogan of “Namaste Y’all!”” Remember that thing I said earlier about multi-function restaurants?

I spent the morning at Headspring which employs many well known members of the .NET community as they’re involved in blogging, C4MVC, MvcContrib, etc. Jeffrey Palermo, Eric Hexter, Jimmy Bogard, Matt Hinze, amongst others (sorry, I don’t know your URLs).

One of the first things I noticed when walking into their office was a big screen TV displaying the statuses of several different builds from their Continuous Integration (CI) server. I watched as a Watin run provided a “ghost in the machine” demonstration of their automated functional test suite.

They walked me through their current project showing how they’re using and customizing ASP.NET MVC and we discussed potential improvements to ASP.NET MVC. One thing they’ve done as they’ve gained experience building ASP.NET MVC applications is to embed many of the lessons they’ve learned into the open source CodeCampServer project.

It may be overkill for what it is, a code camp management website, but the point of the site is to demonstrate practices they use on much larger projects.

After meeting with Headspring, I headed over to meet the DoveTail guys for lunch. Unfortunately, we didn’t go to Torchy’s since we were short on time and didn’t want to wait. Not only that, I had a sangria margarita for lunch and was carded. Those Austin-ites are sticklers for checking IDs.

We spent lunch discussing a wide range of topics on the .NET community, technology, etc. After lunch we headed over to their office where once again I saw a monitor with the status of their continuous integration server displayed on a monitor. Seems all these Austin developers see the value in continuous integration.

We settled in and Jeremy Miller, Chad Myers, Joshua Flanagan, et all walked me through what they’ve done with FubuMVC. I really liked several of the ideas they’ve put in their framework, some of which may show up in ASP.NET MVC in the future as is typical of technical cross-pollination.

After the meeting at Dovetail, I took a cab to the Austin airport to catch a flight home. Looking back, I wished I had been able to spend more time in Austin. Known as the live music capital of the world, I didn’t get a chance to hit the heart of the city.

Even so, I really enjoyed my visit there. The weather was nice and the local tech community seemed to be quite involved and vibrant. It’s definitely a place I want to visit again.