As many of you have probably heard, the release candidate for Visual Studio 2010 was recently released containing immense performance improvements and tons of bug fixes.

I apologize for the confusion this may have caused, but we really felt it was important to have another release candidate for ASP.NET MVC to help verify that we were responding to feedback in the correct manner.

If you wish to have Visual Studio 2010 RC and ASP.NET MVC 2 RC 2 installed at the same time, it’s not a problem.

If you installed ASP.NET MVC 2 RC 2 Before installing VS 2010 RC

Believe it or not, you’re all set if you install them in this order.

When installing VS 2010 RC, the installation will detect that a newer version of the ASP.NET MVC runtime (aka the System.Web.Mvc assembly) is already installed and will not overwrite it with the older version included with VS 2010 RC.

In this configuration, when you create a project using VS 2010 RC, even though the templates may be slightly older, the project will reference the newer System.Web.Mvc assembly.

In this case, there’s a tiny bit of work to do. The installer for ASP.NET MVC 2 RC 2 will block if an older version of the ASP.NET MVC 2 runtime is installed.

To remedy the situation, all you need to do is uninstall the ASP.NET MVC 2 runtime. In Add/Remove Programs dialog(also known as the Program and features dialog), this would be the entry named “Microsoft ASP.NET MVC 2”. 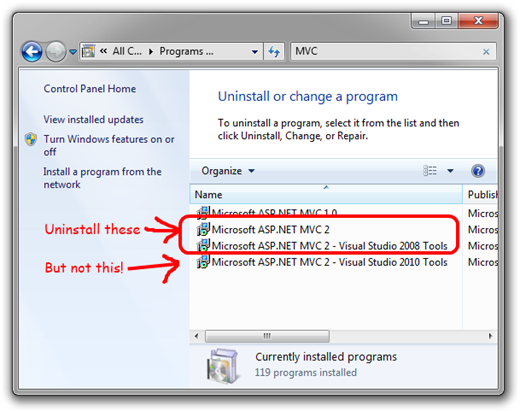 At this point, you should only have Microsoft ASP.NET MVC 2 – Visual Studio Tools for VS 2010 installed. You may now run the installer for ASP.NET MVC 2 RC 2, which will put the runtime on your machine as well as tooling/project templates for VS 2008.

Hopefully this clears up some of the confusion and gets you going with VS 2010 RC and ASP.NET MVC 2 RC 2.