I learned something new yesterday about interface inheritance in .NET as compared to implementation inheritance. To illustrate this difference, here’s a simple demonstration.

I’ll start with two concrete classes, one which inherits from the other. Each class defines a property. In this case, we’re dealing with implementation inheritance.

We can now use two different techniques to print out the properties of the SuperHero type: type descriptors and reflection. Here’s a little console app that does this. Note the code I’m showing below doesn’t include a few Console.WriteLine calls that I have in the actual app.

Let’s look at the output of this code. 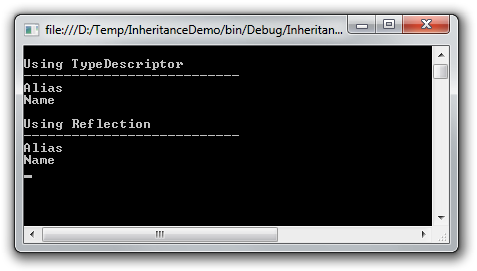 The SuperHero type has two properties, Alias defined on SuperHero and the Name property inherited from its base type.

But now, let’s change these classes into interfaces so that we’re now dealing with interface inheritance. Notice that ISupeHero now derives from IPerson.

I’ve also made the corresponding changes to the console app.

Before looking at the next screenshot, take a moment to answer the question, what is the output of the program now? 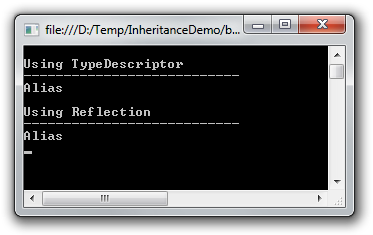 Well it should be obvious that the output is different otherwise I wouldn’t be writing this blog post in the first place, right?

When I first tried this out, I found the behavior surprising. However, it’s probably not surprising to anyone who has an encyclopedic knowledge of the ECMA-335 Common Language Infrastructure specification (PDF) such as Levi, one of the ASP.NET MVC developers who pointed me to section 8.9.11 of the spec when I asked about this behavior:

To highlight the last difference, consider an interface, IFoo, that has a single method. An interface, IBar, which derives from it, is requiring that any object type that supports IBar also support IFoo. It does not say anything about which methods IBar itself will have.

The last paragraph provides a great example of why the code I wrote behaves as it does. The fact that ISuperHero inherits from IPerson doesn’t mean the ISuperHero interface type inherits the properties of IPerson because interfaces do not define implementation.

Rather, what it means is that any class that implements ISuperHero must also implement the IPerson interface. Thus if I wrote an implementation of ISuperHero such as:

The Groo type must implement both ISuperHero and IPerson and iterating over its properties would show both properties.

You probably could have guessed this part was coming. Let’s say you’re trying to use model binding to bind the Name property of an ISuperHero. Since our model binder uses type descriptors under the hood, we won’t be able to bind that property for the reasons stated above.

I learned of this detail investigating a bug reported in StackOverflow. It turns out this behavior is by design. In the context of sending a view model to the view, that view model should be a simple carrier of data. Thus it makes sense to use concrete types on your view model, in contrast to your domain models which will more likely be interface based.