The week before last, I spent the week in Oslo, Norway attending and speaking at the Norwegian Developer’s Conference (NDC 09). This conference was not your typical Microsoft conference I usually attend but was a conference on .NET with a heavy Agile Software bent. 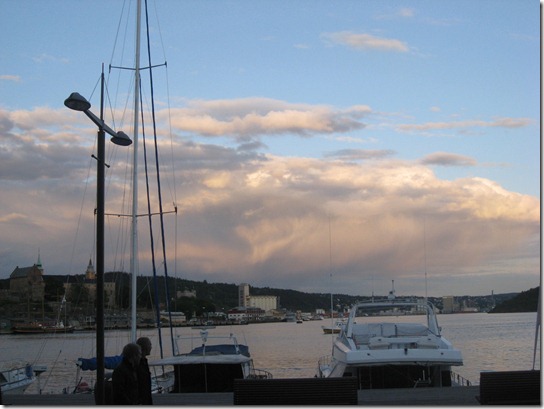 Just looking at the speaker line-up will tell you that. Scott Bellware tweeted a blurb recently that succinctly summarized my impression of the conference:

how to know you’re at a good conference: the speakers are going to sessions (at least the ones who aren’t working on their sessions)

That is definitely true. I didn’t attend as many talks as I would have liked, but I did manage to attend two by Mary Poppendieck which really sparked my imagination and got me excited about the concept of a problem solving organization and learning more about Lean. She had promised to put her slides on her site, but I can’t for the life of me find them! ;)

While there, I gave three talks, one of them being a joint talk with the Hanselnator (aka Mr. Hanselman).

**ASP.NET MVC + AJAX = meant for each other **This covered the Ajax helpers included with ASP.NET MVC and drilled into some of the lesser known client aspects of these helpers, such as showing the Sys.Mvc.AjaxContext object and how to leverage it. The talk then moved into a demonstration of the client templating feature of ASP.NET Ajax 4 Preview 4. I showed off some of the work Jonathan Carter and I (mostly Jonathan) did to make two-way data binding work with ASP.NET MVC. The audience really dug it.

**The Haacked and Hanselman Show **So named because we didn’t have any agenda until about a week before the conference, this ended up being a web security talk where Scott would present a common “secure” implementation of a feature, I would then proceed to “Haack” the feature, and then Scott would fix the feature, all the while explaining what was going on. I think this was very big hit as we saw messages on Twitter like “I’m now too afraid to build a web application”. ;) Of course, I hope more attendees felt empowered rather than fearful. :P 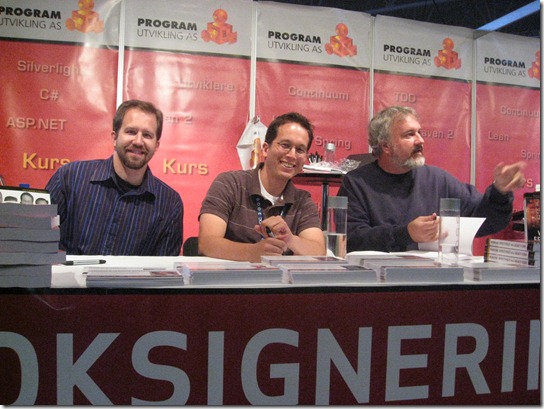 The conference was held in an indoor soccer stadium since it was a venue large enough for all the attendees. They curtained off sections of the bleachers to create rooms for giving the talks. On the outside of the curtains was a large screen which allowed attendees to walk around from talk to talk with a headset on the conference floor if they didn’t feel like sitting in the bleachers. 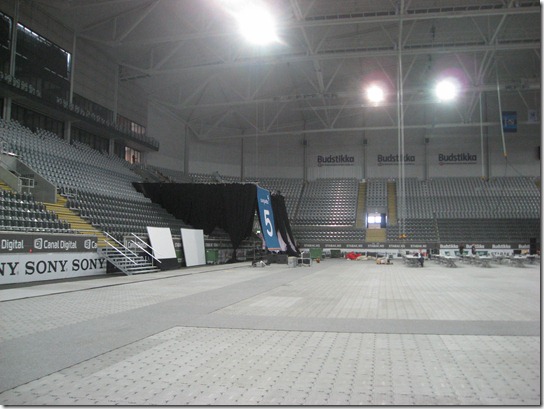 Plenty of bean bags on the floor provided a comfortable place to relax and listen in. In fact, that’s where I would often find some of my new friends lounging around such as the crazy Irishman.

On the second night of the conference, we all rocked out at the big attendee party featuring the band, DataRock which played some rocking music with geek friendly lyrics like:

I ran into her on computer camp (Was that in 84?) Not sure I had my commodore 64 Had to score 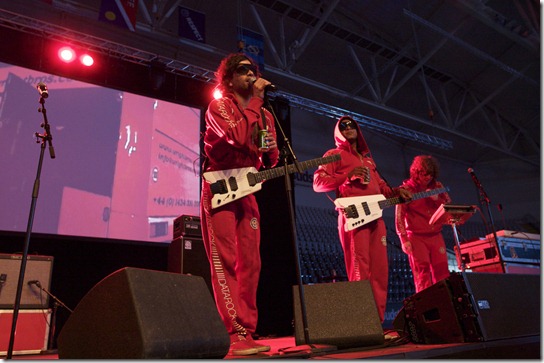 Many thanks to Kjetil Klaussen for posting those lyrics in his NDC 09 highlights post because I had forgotten pretty much every lyric. :) After DataRock, we all went upstairs for the after party to enjoy a more intimate setting with LoveShack, an 80s cover band.

One interesting highlight of the show was a live recording of .NET Rocks. The show was originally going to simply feature Scott Hanselman, but while hanging out in the speakers lounge Carl Franklin, one of the hosts of the show, suggested I join in the fun too. 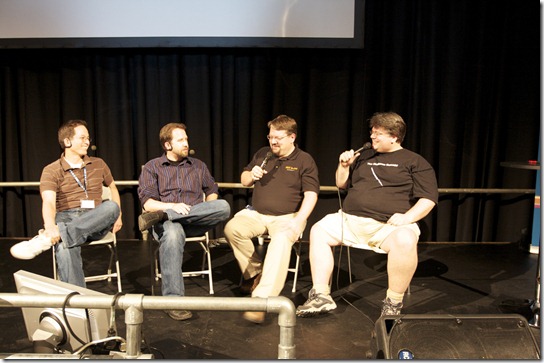 While it was great fun, Scott is a big, no ginormous, personality and I rarely got a word in edgewise, except for the few times I swooped right in just in time to put my foot in my mouth to apparently great comedic effect. In any case, you can listen to the results yourself, though I hope they post the video soon to get the full effect of how much fun everyone was having. :) Be warned, there’s not a lot of real software development content in the show.

The conference ended on Friday leaving all of Saturday for me to relax and actually get out and see Oslo. On Saturday, I headed out to Vigeland Statue Park with an eclectic group of people, Ted Neward, Rocky Lhotka and his wife, Jeremy Miller, and Anna K{Something With Too Many Syllables in a Row}, a conference organizer herself.

The park was very beautiful and I took a ton of pictures, but unfortunately I lost my camera on the flight home from Norway. :( So instead, I’ll just include this Creative Commons licensed picture taken by Cebete from Flickr. The main difference was the sky was a deep blue when we visited. 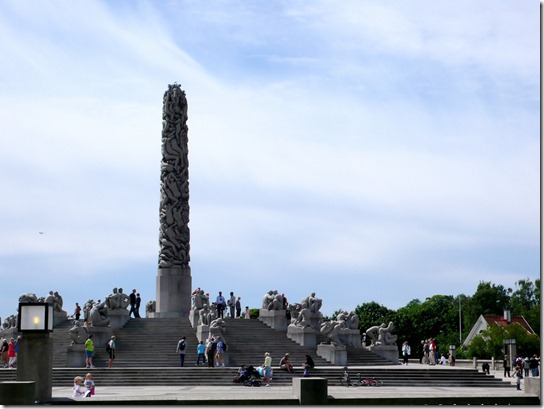 That evening, Sondre Bjellås, an attendee, was kind enough to invite several of us over to his flat for a little gathering. I headed over with Bellware and Anna since everyone else was pretty much flattened by the previous weeks activities. It was great to meet non-techie Norwegians such as his wife and friends in order to get a different perspective on what it’s like to live in Norway. The answer: expensive!

In an odd coincidence, on my connecting flight in Philadelphia, I ran into my good friend Walter who happened to be flying home from Belgium. In fact, we were on the same flight in the same exit row with seats right next to each other. How’s that for a funny coincidence?

Show me the Code!

Rune, one of the organizers of the conference, assures me that the videos of the talks will be posted online soon, so you’ll get to see them if you’d like. I’ve also posted my powerpoint slides and code samples here.

Please note that my talks tend to be heavy in demos so the Powerpoint decks don’t have much content in them. Likewise, the code samples represent the “before” state of my talks, not the “after” state. I usually write up a checklist for each talk which I use a to remind myself where I am in those cases where I have a total brain fart and forget my own name under the pressure of presenting.