Every now and then some email or website comes along promising to prove Fred Brooks wrong about this crazy idea he wrote in The Mythical Man Month (highly recommended reading!) that there is no silver bullet which by itself will provide a tenfold improvement in productivity, reliability, and simplicity within a decade.

This time around, the promise was much like others, but they felt the need to note that their revolutionary new application/framework/doohickey will allow business analysts to directly build applications 10 times as fast without the need for programmers 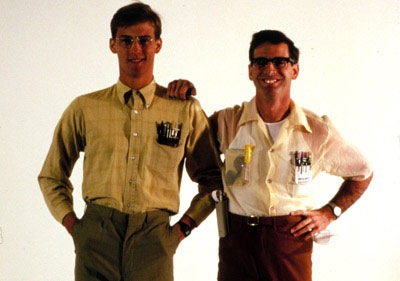 I’m going to try real hard for a moment to forget they said that and not indulge my natural knee jerk reaction which is to flip the bozo bit immediately. If I were a more reflective person, this would raised a disturbing question:

Why are these business types so eager to get rid of us programmers?

It’s easy to blame the suits for not understanding software development and forcing us into a Tom Smykowski moment having to defend what it is we do around here.

Well-well look. I already told you: I deal with the god damn customers so the engineers don’t have to. I have people skills; I am good at dealing with people. Can’t you understand that? What the hell is wrong with you people?

What we’ve got here is a failure to communicate.

Leon Bambrick (aka SecretGeek) recently wrote about this phenomena in his post entitled, The Better You Program, The Worse You Communicate, in which he outlines how techniques that make us effective software developers do not apply to communicating with other humans.

After all, we can sometimes be hard to work with. We’re often so focused on the technical aspects and limitations of a solution that we unknowingly confuse the stakeholders with jargon and annoy them by calling their requirements “ludicrous”. Sometimes, we fail to deeply understand their business and resort to making fun of our stakeholders rather than truly understanding their needs. No wonder they want to do the programming themselves!

Ok, ok. It’s not always like this. Not every programmer is like this and it isn’t fair to lay all the blame at our feet. I’m merely trying to empathize and understand the viewpoint that would lead to this idea that moving programmers out of the picture would be a good thing.

Some blame does deserve to lie squarely at the feet of these snake oil salespeople, because at the moment, they’re selling a lie. What they’d like customers to believe is your average business analyst simply describes the business in their own words to the software, and it spits out an application.

The other day, I started an internal email thread describing in hand-wavy terms some feature I thought might be interesting. A couple hours later, my co-worker had an implementation ready to show off.

Now that my friends, is the best type of declarative programming. I merely declared my intentions, waited a bit, and voila!  Code! Perhaps that’s along the lines of what these types of applications hope to accomplish, but there’s one problem. In the scenario I described, it required feeding requirements to a human. If I had sent that email to some software, it would have no idea what to do with it.

At some point, something close to this might be possible, but only when software has reached the point where it can exhibit sophisticated artificial intelligence and really deal with fuzziness. In other words, when the software itself becomes the programmer, only then might you really get rid of the human programmer. But I’m sorry to say, you’re still working with a programmer, just one who doesn’t scoff at your requirements arrogantly (at least not in your face while it plots to take over the world, carrot-top).

Until that day, when a business analyst wires together an applications with Lego-like precision using such frameworks, that analyst has in essence become a programmer. That work requires many of the same skills that developers require. At this point, you really haven’t gotten rid of programmers, you’ve just converted a business type into a programmer, but one who happens to know the business very well.

In the end, no matter how “declarative” a system you build and how foolproof it is such that a non-programmer can build applications by dragging some doohickeys around a screen, there’s very little room for imprecision and fuzziness, something humans handle well, but computers do not, as Spock demonstrated so well in an episode of Star Trek.

Throw into the mix that the bulk of the real work of building an application is not the coding, but all the work surrounding that, as Udi Dahan points out in his post on The Fallacy of ReUse.

This is not to say that I don’t think we should continue to invest in building better and better tools. After all, the history of software development is about building better and better higher level tools to make developers more productive. I think the danger lies in trying to remove the discipline and traits that will always be required when using these tools to build applications.

Even when you can tell the computer what you want in human terms, and it figures it out, it’s important to still follow good software development principles, ensure quality checks, tests, etc…

The lesson for us programmers, I believe is two-fold. One, we have to educate our stakeholders about how software production really works. Even if they won’t listen, a little knowledge and understanding here goes a long way. Be patient, don’t be condescending, and hope for the best. Secondly, we have to educate ourselves about the business in a deep manner so that we are seen as valuable business partners who happen to write the code that matters.