Being that it’s a glorious Memorial Day Weekend up here in the Northwest, my co-worker Eilon (developer lead for ASP.NET MVC) and I decided to go on a hike to Mt Si where we had a bit of a scary moment.

I first learned about Mt Si at the company picnic last year, seen behind me and Cody in this photo. I remember seeing the imposing cliff face and thinking to myself, I want to climb up there. I imagined the view would be quite impressive.

Mt Si is a moderately strenuous hike 8 miles round trip with an elevation gain of 3100 feet taking you to about 3600 feet, according to the Washington Trails Association website. Given that it is a very popular hike and that this was a three-day weekend, we figured we’d get an early start by heading over there at 7 AM.

That ended up being a good idea as the parking lot had quite a few cars already, but it wasn’t full by any means. This is a picture of the trail head which starts the hike off under a nice canopy of green. 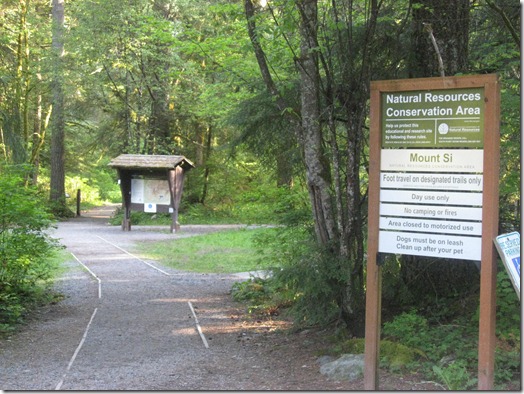 Right away, the no-nonsense trail starts you off huffing uphill amongst a multitude of trees. 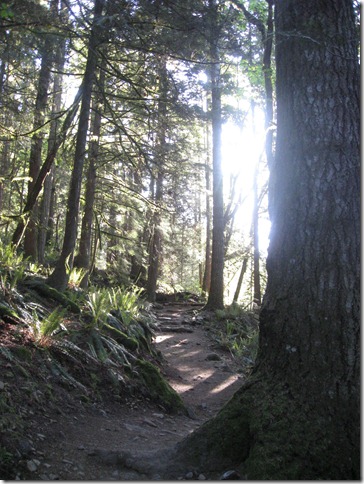 Along the way, there are the occasional diversions. For example, this one won me $10 as the result of a bet that I wouldn’t walk to the edge of the tree overhanging the drop off. 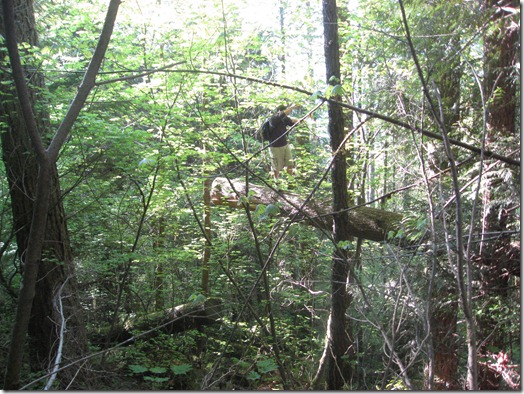 When you get to the top, there’s a great lookout with amazing views. But what caught our attention is a rock outcropping called the “Haystack”, which takes you up another 500 feet. Near the base of the Haystack is a small memorial for those who’ve died from plummeting off its rocky face. It’s not a trivial undertaking, but I demanded we try.

Unfortunately, there’s nothing in the above picture to provide a better sense of scale for this scramble. In the following picture you can see some people pretty much scooting down the steep slope on their butts.

Once they were down, we set up and reached around two thirds of the way when I made the mistake of looking back and made a remark about how it’s going to be much more difficult going down. That started getting us nervous because it’s always easier going up than down.

It would have probably been best if I hadn’t made that remark because the climb wasn’t really that difficult, but introducing a bit of nervousness into the mix can really sabotage one’s confidence, which you definitely want on a climb.

At that point, the damage was done and we decided we had enough and started heading back down. Better to try again another day when we felt more confident. At that moment, a couple heading down told us we were almost there and it wasn’t so bad. Our success heading back down and their comments started to bolster our confidence to the point where I was ready to head back up, until I noticed that my shoe felt odd.

What I hadn’t noticed while climbing on the steep face was that my sole had almost completely detached from my hiking boot during the climb. Fortunately, Eilon had some duct tape on hand allowing me to make this ghetto looking patch job.

At this point I had a mild panic because I worried that the duct tape would cause me to lose grip with my boots on the way down. And frankly, I was pissed off as well, as I’ve had these boots for a few years, but haven’t hiked in them all that often. What a perfect time for them completely fall apart!

Fortunately, I didn’t have much problem climbing back down and we stopped at the first summit to take some pictures and have a brief snack.

Not having the guts today to climb the big rock, I scrambled up a much smaller one and got this great view of Mt Rainier in its full splendor. 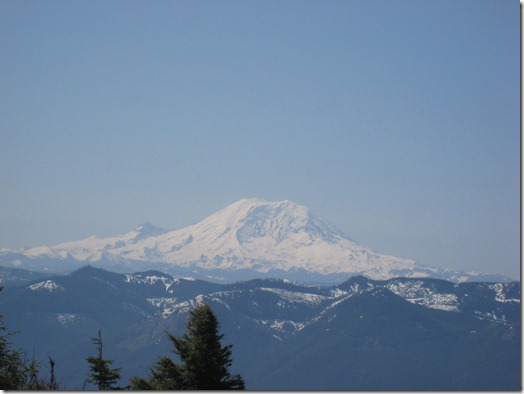 The view from the top is quite scenic and using binoculars, I was able to check on my family back in Bellevue (joke). 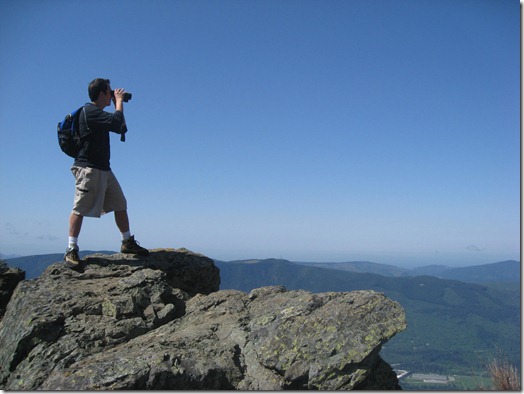 Going back down was much quicker than the way up and we had a blast of it practically trail running the first part, until my other shoe gave out. 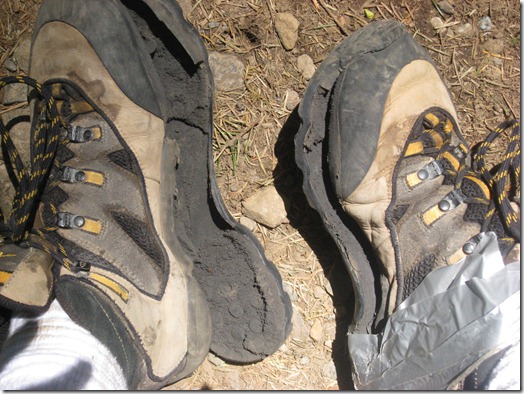 Guess the warranty must have run out yesterday. ;) Fortunately, Eilon, who was prepared with the Duct tape, also had all terrain sandals with him, which I wore the rest of the way. Next time, I think I’ll ditch the Salomon boots and try Merrells which other hikers I ran into were wearing.

Despite the mishaps, the hike was really a fun romp in the woods and I highly recommend it to anyone in the Seattle area to give it a try. Go early to avoid the crowds. I doubled my $10 in an over/under bet where I took 140 and over cars in the lot. We stopped counting at around 170 cars in the lot when we left.

This is one last look at Mt Si on our way back home. Eilon put together a play-by-play using Live Maps Bird’s Eye view (click for larger).

For more info on the Mt Si hike, check out the Washington Trails Association website.