Say you’re building a web application and you want, against your better judgment perhaps, to allow end users to easily customize the look and feel – a common scenario within a blog engine or any hosted application.

With ASP.NET, view code tends to be some complex declarative markup stuck in a file on disk which gets compiled by ASP.NET into an assembly. Most system administrators would first pluck out their own toenail rather than allow an end user permission to modify such files. 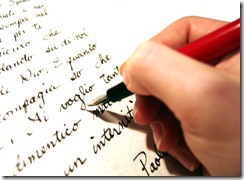 At the ALT.NET conference a little while back, Jimmy Schementi and John Lam gave a talk about the pattern of hosting a scripting language within a larger application. For example, many modern 3-D Games have their high performance core engine written in C++ and Assembly. However, these games often use a scripting language, such as Lua, to write the scripts for the behaviors of characters and objects.

An example that might be more familiar to more people is the use of VBA to write macros for Excel. In both of these cases, the larger application hosts a scripting environment that allow end users to customize the application using a simpler lighter weight language than the one the core app is written in.

A long while back, I wrote a blog post about defining ASP.NET MVC Views in IronRuby followed by a full IronRuby ASP.NET MVC stack. While there was some passionate interest by a few, in general, I was met with the thunderous sound of crickets. Why the huge lack of interest? Probably because I didn’t really sell the benefit and the explain the pain it solves. I’m sure many of you were asking, Why bother? What’s in it for me?

After thinking about it some more, I realized that my prototypes appeared to suggest that if you want to take advantage of IronRuby, you would need to make some sort of wholesale switch to a new foreign language, not something to be undertaken lightly.

This is why I really like Jimmy and John’s recent efforts to focus on showing the benefits of hosting the DLR for scripting scenarios like the ones mentioned above. It makes total sense to me when I look at it in this perspective. The way I see it, most developers spend a huge bulk of their time in a single core language, typically their “language of choice”. For me, I spend the bulk of my time writing C# code.

However, I don’t think twice about the fact that I also write tons of JavaScript when I do web development, and I’ll write the occasional VB code when I need a new Macro for Visual Studio or Excel. I also write SQL when I need to. I’m happy to pick up and use a new language when it will enable me to do the job at hand more efficiently and naturally than C# does. I imagine many developers feel this way. The occasional use of a scripting languages is fine when it gets the job done and I can still spend most of my time in my favorite language.

So I started thinking about how that might work in a web application. What if you could write all your business logic and controller logic in your language of choice, but have your views written in a light weight scripting language. If my web application were to host a scripting engine, I could actually store the code in any medium I want, such as the database. Having them in the database makes it very easy for end users to modify it since it wouldn’t require file upload permissions into the web root.

This is where hosting the DLR is a nice fit. I put together a proof of concept for these ideas. This is just a prototype intended to show how such a workflow might work. In this prototype, you go about creating your models and controllers the way you normally would.

For example, here’s a controller that returns some structured data to the view in the form of an anonymous type.

Once you write your controller, but before you create your view, you compile the app and then go visit the URL. 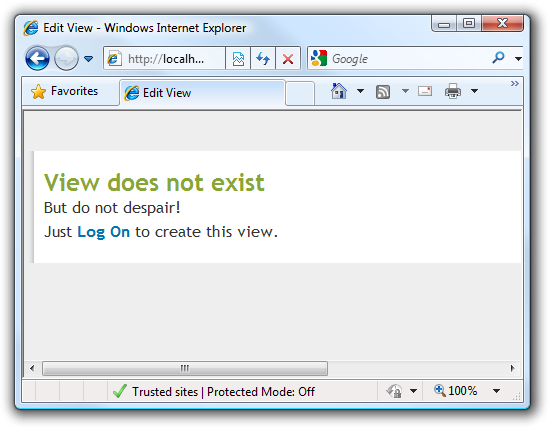 We haven’t created the view yet, so let’s follow the instructions and login. Afterwards, we this: 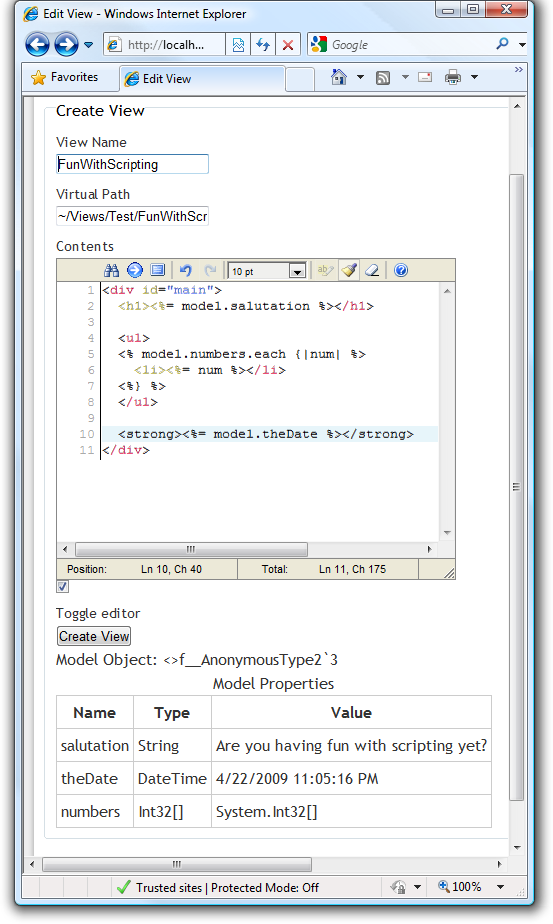 Since the view doesn’t exist, I hooked in and provided a temporary view for the controller action which contains a view editor. Notice that at the bottom of the screen, you can see the current property names and values being passed to the view. For example, there’s an enumeration of integers as one property, so I was able to use the Ruby each method to print them out in the view.

The sweet little browser based source code editor is named Edit Area created by Christophe Dolivet. Unfortunately, at the time I write this, it doesn’t yet have support for ERB style syntax highlighting schemes. That’s why the <% and %> aren’t highlighted in yellow.

When I click Create View, I get taken back to the request for the same action, but now I can see the view I just created (click to enlarge).

In the future, I should be able to host C# views in this way. Mono already has a tool for dynamically compiling C# code passed in as a string which I could try and incorporate.

I’m seriously thinking of making this the approach for building skins in a future version of Subtext. That would make skin installation drop dead simple and not require any file directory access. Let me know if you make use of this technique in your applications.

If you try and run this prototype, please note that there are some quirky caching issues with editing existing views in the prototype. It’ll seem like your view is not being edited, but it’s a result of how views are being cached. It might take a bit of time before your edits show up. I’m sure there are other bugs I’m still in the process of fixing. But for the most part, the general principle is sound.