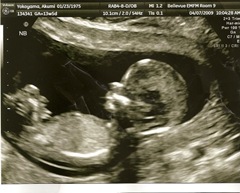 So my wife and I conspired together and we’re happy to announce that baby #2 is on the way. Together, the two of them will be unstoppable!

My wife is past her first trimester and we expect the baby to RTF (Release To Family) around October.

This second time around has been a bit more challenging. My poor wife, bless her heart, has had to deal with much more sever nausea this time around.

Notice the crinkle in the ultrasound photo. My son did that. ;) He’s trying to destroy the evidence.

Many of you who have more than one children might be able to relate to this, but I really considered not writing a blog announcement for my second child. There was the feeling that it was such a novel thing the first time, but now it’s becoming old hat (not really!).

But then I mentally fast forwarded 16 years later and pictured my future daughter finding the firstborn announcement and not finding her own blog announcement. Try explaining that to a kid. I can deal without the drama.

Well I won’t have to! Hi honey, here’s your announcement. Now you be good while daddy goes shopping for a shotgun and a shovel. :)