First let me begin by assuring you, this is not an April Fool’s joke. 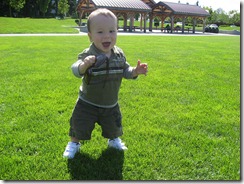 Exciting news! Scott Guthrie announced today that we have released the source code for ASP.NET MVC 1.0 under the Ms-PL license, an OSI approved Open Source license with all the rights that license entails.

You can download the Ms-PL licensed source package from the download details page here. Just scroll down and look for the file named AspNetMvc1.Ms-PL.source.zip. My baby is growing up!

A big thanks must go out to everyone involved in making this happen and to those who approved it. It’s truly a team effort. When I joined Microsoft, I remember walking into ScottGu’s office to try and plant the seed for releasing ASP.NET MVC under the Ms-PL license. I came in armed with reasons why we should, but found him to be immediately receptive, if not already thinking along those lines. In fact, a lot of people such as Brian Goldfarb, my management chain, our LCA contact, etc… were completely on board, which was unexpected (though maybe it should not have been) and encouraging to me.

However, there’s agreement to do something and the actual doing. It still a lot of people to do the leg-work to make it happen. I personally was kept me very busy in the days leading up to the official RTM release. Let’s just say I feel like I’m one course away from getting a law degree.

I know one of the first questions some of you will ask is will we accept source code contributions (I’ve already seen the question on Twitter :). Unfortunately, at this time the answer is no, we do not accept patches. Please don’t let that stop you from contributing in other ways. The terms of the license do mean we need to stay on our toes to keep putting out compelling releases and we will work hard not to disappoint.

Personally (and this is totally my own opinion), I’d like to reach the point where we could accept patches. There are many hurdles in the way, but if you went back in time several years and told people that Microsoft would release several open source projects (Ajax Control Toolkit, MEF, DLR, IronPython and IronRuby, etc….) you’d have been laughed back to the present. Perhaps if we could travel to the future a few years, we’ll see a completely different landscape from today.

However, it is a complex issue and I don’t want to downplay that, but there are many of us who are looking for novel solutions and trying to push things forward. I really think in the long run, it is good for us and four our customers, otherwise we wouldn’t care.

But coming back to the present, I’m extremely pleased with where we are now and look forward to what will happen in the future. Someone once expressed disappointment that my involvement in open source projects seriously declined after joining Microsoft. It was my hope at the time that by the time it released, it would be clear that technically, I had been working on OSS. :)