Today I read something where someone was comparing Web Forms to ASP.NET MVC and suggested that Web Forms does a lot more than ASP.NET MVC to protect your site from malicious attacks.

One example cited was that Server controls automatically handled HTML encoding so you don’t have to really think about it. The idea here is that Web Forms automatically protects you from XSS attacks.

My friends, I’m afraid this is just not true. Take a look at the following page code.

In this page, we simulate taking some some user input we got from somewhere, whether it’s from a form post or from a database, and we place it in a Label control, and in a Literal control.

These are two of the most common controls used to display user input. I’ll save you the suspense of having to actually try it out, and just show you what happens when run this page. 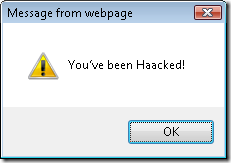 Contrary to popular belief, these controls do not automatically HTML encode their output. I don’t see this as some gaping security flaw because it may well be that the intention of these controls, and general usage, is to display HTML markup the developer specifies, not what the user specifies. The potential security flaw lies in using these controls without understanding what they actually do.

The lesson here is that you always have to think about security. There’s no silver bullet. There’s no panacea. Damien Guard has a great post where he lists other signs your ASP.NET application might be succeptible to injection attacks, pointing out various ways that protection is not automatic.

The best approach is to take a more holistic approach. Create a threat model for your website and start attacking your own site as if you were a hacker, looking for flaws. Conduct security reviews and use any automated tools you can find for finding potential flaws. I recommend taking a look at CAT.NET combined with the AntiXss library.

In this particular case, I don’t think Web Forms provides any more automatic security than ASP.NET MVC. With MVC, we’ve swapped server controls with our helper methods, which properly encode output. If you don’t use our helpers, it’s roughly equivalent to not using the server controls.

Interestingly enough, in order to get that particular user input to the page in the first place is tricky. If you were to create a Web Form with a text input and a button, and type that script tag into text box and click the button, you’d be greeted by the following yellow screen of death. 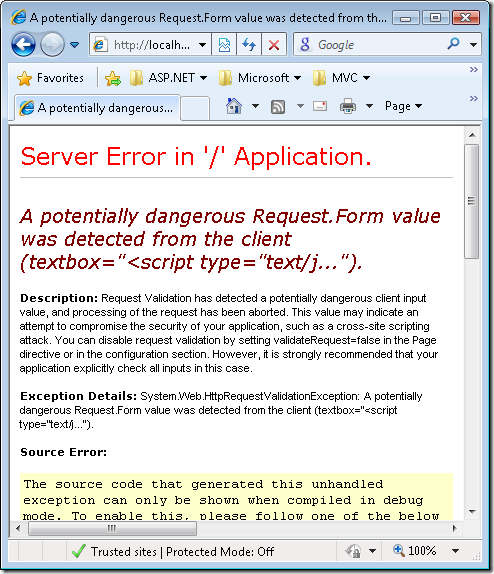 For example, ASP.NET MVC does not have an automatic equivalent of Event Validation which was introduced in ASP.NET 2.0. Note that event validation is very different from request validation and is very specific in to server controls. For example, as the blog post I linked to mentions, if you add a DropDownList control with three options, and a user posts a non-existent option, you will get an exception. ASP.NET MVC doesn’t have such automatic validation. In some cases, this is a good thing because it makes AJAX scenarios simpler.

What ASP.NET MVC does have is a set of Anti Forgery (CSRF) helpers which require a bit of manual intervention.

To recap, while I do agree that Web Forms does provide a bit more automatic security than ASP.NET MVC, the gap is not as wide as you might think. Server controls are no more nor less secure than using the Helpers with ASP.NET MVC. And all of that is irrelevant because it is still up to the developer’s to take responsibility for the security of his or her site. I’ve heard of many developers who had to turn off Request and Event Validation for various reasons. In those cases, they examined the attack vectors opened up by these changes and provided alternate protections to replace the ones they turned off.