On Tuesday, we announced the release candidate for ASP.NET MVC. While there is much new in there to be excited about and many many bug fixes, there were two changes introduced in the RC that broke some scenarios which previously worked in the Beta, as reported by customers.

We’ve updated the Release Candidate with a refresh that addresses these two issues. You can use the recently released Microsoft Web Platform Installer 1.0 to install ASP.NET MVC RC Refresh. It happens to be a handy tool for installing not just ASP.NET MVC, but everything you might need to use ASP.NET MVC such as Visual Web Developer Express 2008 SP1.

The link on the official download page appears to be updated with the new MSI (we pushed it out yesterday), but we’ve experienced some odd proxy caching issues etc where some people were still getting the old MSI.

In order to be safe, you can get the download directly from this download link.I don’t anticipate any problems with that link, but being paranoid, the way to fully ensure you have the refresh is to right click on the downloaded file, select the Digital Signatures tab, and make sure the Time Stamp says Wednesday, January 28 and not Friday, January 23. 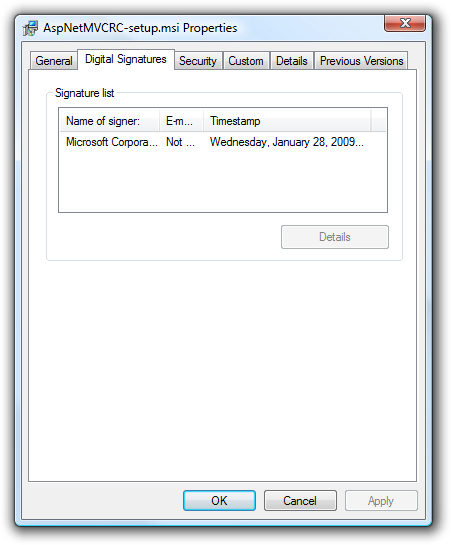 Don’t forget to fully uninstall the previous RC before installing this one.

The first change was that we changed our helper methods that generate URLs and links to now generate relative paths instead of absolute paths. This caused problems with several AJAX scenarios.

The fix to this in the refresh was to roll back that check-in so the behavior went back to the way it was in the Beta. We will not use relative paths, and we have no intention of re-introducing the generation of relative paths. Because we rolled back this change to a known good state, we feel very confident in the current behavior. URL generation should work the same way it did back in the Beta.

The other regression is that in some cases, the RouteUrl (and thus RouteLink) methods return an empty string when you specify a route name, but the route has default parameters which are not parameters in the URL.

For example, if you have the following route:

Notice that controller has default value, but is not part of the URL. If you then specify:

You might expect that it would use that route to render the URL, but it doesn’t. This bug was introduced when we refactored all our url generating helpers to call into a common method. It turns out, however, that our RouteUrl methods (aka non-MVC specific) should have subtly different behavior than the MVC specific methods (such as Action). We added a flag to the common method so that this difference is taken into consideration. This was a fix that did not have a large surface area.

Another thing we did was update all our test cases (both unit tests and automated functional tests) with scenarios reported to us by customers. So now, we have these types of cases well covered.

If you downloaded the Release Candidate before today, you should check the digital signature timestamp as I described earlier and if it’s the old one, I recommend you go and download the refresh via the Web Platform Installer or directly at the URL I mentioned earlier.

As I mentioned before, we are very excited about this release and hope that you are enjoying writing code with it. :)