Pop quiz. What would you expect these three bits of HTML to render?

In fact, here’s what it renders using Firefox 3.0.3. I confirmed the same behavior with IE 8 beta 2 and Google Chrome. 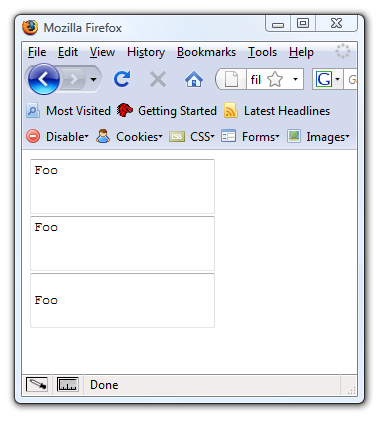 Notice that the first two text areas are identical. Why is this important?

Suppose you’re building an ASP.NET MVC website and you call the following bit of code:

You probably would expect to see the third text area in the screenshot above in which “Foo” is rendered on the second line, not the first.

However, suppose our TextArea helper didn’t factor in the actual behavior that browsers exhibit. You would in this case get the behavior of the second text area in which “Foo” is still on the first line.

Fortunately, our TextArea helper does factor this in and renders the supplied value on the next line after the textarea tag. In my mind, this is very much an edge case, but it was reported as a bug by someone external a while back. Isn’t HTML fun?! ;)