A while ago I wrote a blog post about how painful it is to properly parse an email address. This post is kind of like that, except that this time, I take on HTML.

I’ve written about parsing HTML with a regular expression in the past and pointed out that it’s extremely tricky and probably not a good idea to use regular expressions in this case. In this post, I want to strip out HTML comments. Why?

I had some code that uses a regular expression to strip comments from HTML, but found one of those feared “pathological” cases in which it seems to never complete and pegs my CPU at 100% in the meanwhile. I figure I might as well look into trying a character by character approach to stripping HTML.

It sounds easy at first, and my first attempt was roughly 34 lines of procedural style code. But then I started digging into the edge cases. Take a look at this: 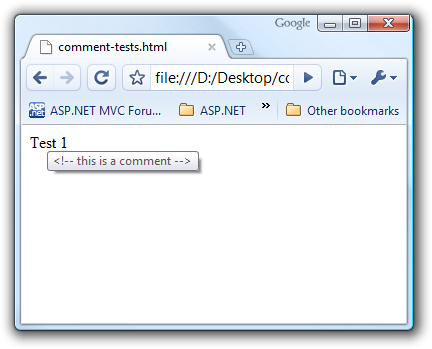 Notice that when I put the mouse over “Test 1” and the browser rendered the value of the title attribute as a tooltip. That’s not even the funkiest case. Check this bit out in which my comment is an unquoted attribute value. Ugly!

Still, the browsers dutifully render it: 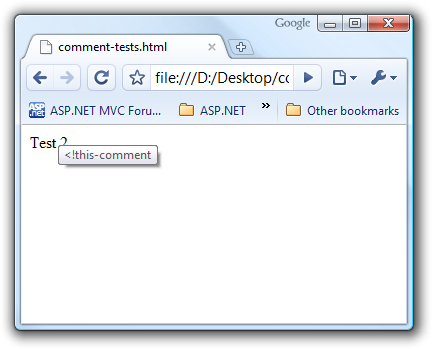 At this point, It might seem like I’m spending too much time worrying about crazy edge cases, which is probably true. Should I simply strip these comments even if they happen to be within attribute values because they’re technically invalid. However, it worries me a bit to impose a different behavior than the browser does.

Just thinking out loud here, but what if the user can specify a style attribute (bad idea) for an element and they enter:

If we strip out the comment, then suddenly, the style attribute might lend itself to an attribute based XSS attack.

I tried this on the three browsers I mentioned and nothing bad happened, so maybe it’s a non issue. But I figured it would probably make sense to go ahead and strip the HTML comments in the cases that the browser. So I decided to not strip any comments within an HTML tag, which means I have to identify HTML tags. That starts to get a bit ugly as <foo > is assumed to be an HTML tag and not displayed while <çoo /> is just content and displayed.

Before I show the code, I should clarify something. I’ve been a bit imprecise here. Technically, a comment starts with a – character, but I’ve referred to markup such as <!> as being a comment. Technically it’s not, but it behaves like one in the sense that the browser DOM recognizes it as such. With HTML you can have multiple comments between the <! and the > delimiters according to section 3.2.5 of RFC 1866.

The code I wrote today was straight up old school procedural code with no attempt to make it modular, maintainable, object oriented, etc… I posted it to refactormycode.com here with the unit tests I defined.

In the end, I might not use this code as I realized later that what I really should be doing in the particular scenario I have is simply stripping all HTML tags and comments. In any case, I hope to never have to parse HTML again. ;)