Usability and Discoverability (also referred to as Learnability) are often confused with one another, but they really are distinct concepts. In Joel Spolsky’s wonderful User Interface Design for Programmers (go read it!), Joel provides an metaphor to highlight the difference.

It takes several weeks to learn how to drive a car. For the first few hours behind the wheel, the average teenager will swerve around like crazy. They will pitch, weave, lurch, and sway. If the car has a stick shift they will stall the engine in the middle of busy intersections in a truly terrifying fashion.
If you did a usability test of cars, you would be forced to conclude that they are simply unusable. 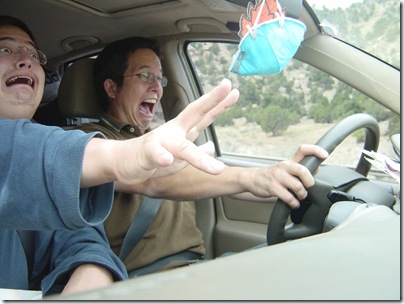 This is a crucial distinction. When you sit somebody down in a typical usability test, you’re really testing how learnable your interface is, not how usable it is. Learnability is important, but it’s not everything. Learnable user interfaces may be extremely cumbersome to experienced users. If you make people walk through a fifteen-step wizard to print, people will be pleased the first time, less pleased the second time, and downright ornery by the fifth time they go through your rigamarole.

Sometimes all you care about is learnability: for example, if you expect to have only occasional users. An information kiosk at a tourist attraction is a good example; almost everybody who uses your interface will use it exactly once, so learnability is much more important than usability.

These are all exmaples of the principle that there is no such thing as a perfect design. Design always consists of trade-offs.

Let’s look at an example using a specific feature of ASP.NET Routing that illustrates this trade-off. One of the things you can do with routes is specify constraints for the various URL parameters via the Constraints property of the Route class.

The type of this property is RouteValueDictionary which contains string keys mapped to object values. Note that by having the values of this dictionary be of type object, the value type isn’t very descriptive of what the value should be. This hurts learnability, but let’s dig into why we did it this way.

One of the ways you can specify the value of a constraint is via a regular expression string like so:

This route specifies that the foo segment of the URL must start with “abc” and that the bar segment must be four characters long. Pretty dumb, yeah, but it’s just an example to get the point across.

We figure that in 99.9% of the cases, developers will use regular expression constraints. However, there are several cases we identified in which a regular expression string isn’t really appropriate, such as constraining the HTTP Method. We could have hard coded the special case, which we originally did, but decided to make this extensible because more cases started cropping up that were difficult to handle. This is when we introduced the IRouteConstraint interface.

At this point, we had a decision to make. We could have changed the the type of the Constraints property to something where the values are of type IRouteConstraint rather than object in order to aid discoverability. Doing this would require that we then implement and include a RegexConstraint along with an HttpMethodConstraint.

That’s definitely more discoverable, but at the cost of usability in the general case (note that I didn’t even include other properties of a route you would typically configure). For most users, who stick to simple regular expression constraints, we’ve just made the API more cumbersome to use.

It would’ve been really cool if we could monkey patch an implicit conversion from string to RegexConstraint as that would have made this much more usable. Unfortunately, that’s not an option.

So we made the call to favor usability in this one case at the expense of discoverability, and added the bit of hidden magic that if the value of an item in the constraints dictionary is a string, we treat it as a regular expression. But if the value is an instance of a type that implements IRouteConstraint, we’d call the Match method on it.

It’s not quite as discoverable the first time, but after you do it once, you’ll never forget it and it’s much easier to use every other time you use it.

Keep in mind that Routing is a separate feature from ASP.NET MVC. So what I’ve covered applies specifically to Routing.

When we looked at how Routing was used in MVC, we realized we had room for improving the usability. Pretty much every time you define a route, the route handler you’ll use is MvcRouteHandler it was odd to require users to always specify that for every route. Not only that, but once you got used to routing, you’d like a shorthand for defining defaults and constraints without having to go through the full collection initializer syntax for RouteValueDictionary.

This is when we created the set of MapRoute extension methods specific to ASP.NET MVC to provide a façade for defining routes. Note that if you prefer the more explicit approach, we did not remove the RouteCollection’s Add method. We merely layered on the MapRoute extensions to RouteCollection to make defining routes simpler. Again, a trade-off in that the arguments to the MapRoute methods are not as discoverable as using the explicit approach, but they are usable once you understand how they work.

We spent a lot of time thinking about these design decisions and trade-offs, but it goes without saying that it will invite criticisms. Fortunately, part of my job description is to have a thick skin. ;)

In part, by favoring usability in this case, we’ve added a bit of friction for those who are just starting out with ASP.NET MVC, just like in Joel’s example of the teenager learning to drive. However, after multiple uses, it becomes second nature, which to me signifies that it is usable. Rather than a flaw in our API, I see this more as a deficiency in our documentation and Intellisense support, but we’re working on that. This is an intentional trade-off we made based on feedback from people building multiple applications.

But I understand it won’t please everyone. What would be interesting for me to hear is whether these usability enhancements work. After you struggle to define constraints the first time, was it a breeze the next time and the time after that, especially when compared to the alternative?