UPDATE: I updated the prototype to work against the ASP.NET MVC 1.0 RTM. Keep in mind, this is *NOT* a backport of the the ASP.NET MVC 2 feature so there may be some differences.

A question that this. The funny part with things like this is that I’ve probably spent as much time writing this blog post as I did working on the prototype, if not more!

The scenario that areas address is being able to partition your application into discrete areas of functionality. It helps make managing a large application more manageable and allows for creating distinct applets that you can drop into an application. 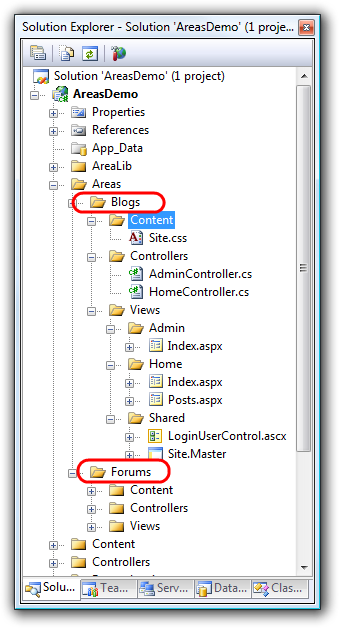 Notice that these folders have their own Views, Content, and Controllers directories. This is slightly similar to a solution proposed by Steve Sanderson, but he ran into a few problems we’d like to resolve.

The prototype I put together resolves these problems by adopting and enforcing a few constraints when it comes to areas.

This last point bears a bit of elaboration. It is a technique that came about from some experimentation I did on a potential new way of skinning for Subtext.

If you run the sample, you’ll see what I mean. When you hit the Blogs area, the login link is replaced by some text saying “Blogs don’t need no stinking login”, but the Forums area still has the login link.

Note that all of these conventions are specifically for this prototype. It would be very easy to relax these constraints to fit you’re own way of doing things. I just wanted to show how this could be done using the current ASP.NET MVC bits.

The first thing we do is call two new extension methods I wrote to register routes for the areas. This call is made in the RegisterRoutes method in Global.asax.cs.

The first argument to the MapAreas method is the Routing URL pattern you know and love. We will prepend an area to that URL. The second argument is a root namespace. By convention, we will append “.Areas.AreaName.Controllers” to the provided root namespace and use that as the namespace in which we lookup controller types.

For example, suppose you have a root namespace of MyRootNamespace. If you have a HomeController class within the Blogs area, its full type name would need to be

Again, this is a convention I made up, it could be easily changed. The nice thing about following this convention is you don’t really have to think about namespaces if you follow the directory structure I outlined. You just focus on your areas.

The last argument to the method is a string array of the “areas” in your application. Perhaps I could derive this automatically by examining the file structure, but I put together this prototype in the morning and didn’t think of that till I was writing this blog post. ;)

The second method, MapRootArea, is exactly the same as MapRoute, except it adds a default of area = “root” to the defaults dictionary.

I also wrote a very simple custom view engine that knows how to look in the Areas folder first, before looking in the root Views folder when searching for a view or partial view.

I wrote this in such a way that it replaces the default view engine. To make this switch, I added the following in Global.asax.cs in the Application_Start method.

The code for the AreaViewEngine is fairly simple. It inherits from WebFormViewEngine and looks in the appropriate Areas first for a given view or partial view before looking in the default location. The way I accomplished this was by adding some catch-all location formats such as ~/{0}.aspx and formatted those myself in the code.

If that last sentence meant nothing to you, don’t worry. It’s an implementation detail of the view engine.

In the root view, I have the following markup to link to the HomeController and Index action of each area.

However, within an area, I don’t have to specify the area when linking to another action within the same area. It chooses the current area by default. For example, here’s the code to render a link to the Blogs area’s Posts action.

As you click around in the sample, you’ll notice that I changed the background color when in a different area to highlight that fact.

One thing my prototype doesn’t address are nested areas. This is something I’ll try to tackle next. I’m going to see if I can clean up the implementation later and possibly get them into the MVC Futures project. This is just some early playing around I did on my own so do let me know if you have better ideas for improving this.