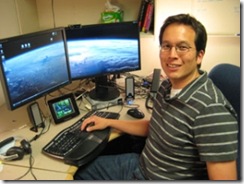 Recently, Adam Kinney came by my office to interview me for a Channel 9 episode discussing ASP.NET MVC CodePlex Preview 4.

I’ve known Adam for a long time, even before he joined Microsoft. I think we met (in person) at Tech-Ed 2003.

In any case, we talk a bit about ASP.NET MVC and Preview 4, all the while I tried very hard not to put my foot in my mouth. At the end there are some outtakes of me impersonating Scott Hanselman doing an impersonation of Sean Conery. That wasn’t to make fun of Scott, but totally out of love and respect. ;)

In the interview, I mentioned that I used to work at a skill gaming company called SkillJam which is no longer around. We had a tournament engine that allowed users to play games of skill for money. I worked on the back-end technologies such as our mobile gaming infrastructure which was well reviewed by GameSpot.

SkillJam is no longer around as it was bought by FUN Technologies (yes, I literally worked for “Fun” back then) and subsumed into World Winner.

In any case, one of the sharpest coworkers that I worked with there went out on his own to start a new game development company called CasualCafe. This guy was the one who lived in the world of writing low-level C++ code, anti-cheat techniques, and game engines. If you are into the genre of “Casual Games” (such as Bejewelled, Solitaire, etc…) be sure to check it out.

Books on My Shelf

Via Twitter, James Avery was more interested in the books on my shelf than what I was saying (I don’t blame him). In case you were wondering, here’s a partial list:

There are other books up there, but these are the ones I’ve read cover-to-cover and can recommend.