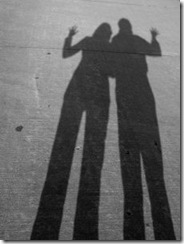 Thanks! But I had made the very same point in that post.

And for those that don’t know, BFF is an acronym for Best Friends Forever. Yes, the “Forever” is redundant in the blog title, but it’s just how people use it.

Case in point, how often do you hear the phrase “PIN Number” which expands to “Personal Identification Number Number”. I started looking for other examples of such redundant acronyms and sure enough, there’s a term for them and a wikipedia article describing them.

RAS syndrome stands for “Redundant Acronym Syndrome syndrome,” and refers to the use of one of the words that make up an initialism or acronym as well as the abbreviation itself, thus in effect repeating that word. It is itself a humorous example of a redundant acronym.

And in case you didn’t notice, “RAS Syndrome” is itself humorously a RAS. The Wikipedia article points to other great examples.

The article references another page with a collection of more redundant acronyms.

It’s not surprising that most of these come from the technology field as we tend to be very acronym happy and love our TLAs (Three Letter Acronyms).

So now it is my turn to coin a RAS. I am going to call it PCS syndrome which stands for “Premature Correction Syndrome syndrome.” This describes the condition in one is compelled to interject with a correction without having read through the rest of the contents, especially when the author offers an explanation for the seemingly erroneous item. ;)

I’m only teasing because PCS happens to me a lot. I find that the comments to many of my blog posts tend to focus on some irrelevant miniscule detail rather than the topic at hand. Which I’m not necessarily opposed to because that provides great fodder for future blog posts!