I wish I could have been there, but I was celebrating my son’s first birthday (which gives me an opening to gratuitously post a picture of the kid here). 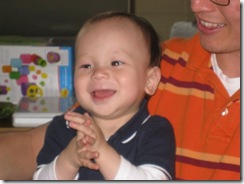 I’m talking about Tech-Ed 2008 Orlando of course where John Lam presented a demo of IronRuby running on top of ASP.NET MVC.

The final missing piece was defining controllers using IronRuby. Working with members of John’s team, Levi (a dev on the ASP.NET MVC team) made the necessary adjustments to get a prototype IronRuby controller working with ASP.NET MVC.

Disclaimer: This is all a very rough prototype that we’ve been doing in our spare time for fun. We just wanted to prove this could work at all.

Unfortunately, we can’t release the demo yet because it relies on unreleased ASP.NET MVC code. When we deploy our next CodePlex interim release of ASP.NET MVC, the demo that John provided should actually work. :)

And for those that don’t know, BFF is an acronym for Best Friends Forever. Yes, the “Forever” is redundant in the blog title, but it’s just how people use it. As an aside, I found out recently that a good buddy of mine in L.A. is actually working on the set of a new show tentatively titled “Paris Hilton’s My New BFF”, where contestants compete to become Paris Hilton’s new Best Friend.