My family and I recently moved into our new home after a two month stay in temporary housing. One of the perks of moving is when your stuff is delivered from storage, it feels like Christmas again. “Oooh! Look at all the boxes I get to unwrap. Hey! I have a Stereo just like this one!”.

I have a tendency to get distracted by the things I’m unwrapping. For example, I found a few of my old college Math textbooks. I started thumbing through the Complex Analysis, Abstract Algebra, and Number theory books and they seemed like total gibberish to me.

Artists and writers often get all the credit for creativity. It’s often why people call them creative types. Meanwhile, mathematicians are often unfairly portrayed and humorless, pencil pushing, uncreative types. This is so not true. Many mathematicians use computers now and love telling jokes like “Can you prove that the integral of e to the x is equal to f sub u of n?” Perhaps if I write out the equation the joke becomes more apparent.

Hey, I didn’t say mathematicians had a **good sense of humor. The fact is that this idea that mathematicians lack creativity comes from those who never made it to higher math. Once you hit abstract algebra, number theory, non-Euclidean geometry, etc… you start to wonder if perhaps the giants in the field were smoking a little something something to come up with this stuff.

The creativity involved in some of the proofs (or even the questions the proofs prove) just boggles the mind. I imagine that the proof of Fermat’s Last Theorem (which reportedly took 7 straight years of work to crack) is something that pretty much nobody in the world understands. Not unlike an abstract painting in a modern art museum. But I digress…

Number theory was my favorite class at the time so I thought I’d sit down, crack open the text, and see if I could understand one problem and even make progress on it.

I understood this stuff once, when I was in college, but now, when I’m older and wiser, I am slower to pick it up, even though I understood it once already. So I started thinking? What is different between the now me and the college me? Then it hit me… 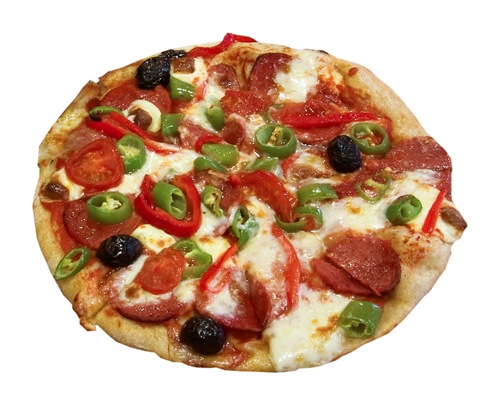 Think about it for a sec. They often say programmers are machines that turns coffee into code. I wonder if college math students are machines that turn Pizza into solved problem sets? And what about the mythical lore of those early Dot-Com boom startups which started off as a small group of recent college students, Pepsi, and a bunch of Pizzas and ended up selling for millions? Pizza was the common denominator.

I think I’m on to something here. Perhaps Pizza is brain food. I wonder if it’s the Mozzarella or the Pepperoni. Of course, the problem for me now is that college was a long time ago. While the question of whether Pizza is brain food is mere idle speculation, it is a well established fact that Pizza is definitely gut food. Food for thought.