UPDATE: I’ve added a NuGet package named “routedebugger” to the NuGet feed, which will make it much easier to install.

UPDATE 2: In newer versions of the NuGet package you don’t need to add code to global.asax as described below. An appSetting <add key="RouteDebugger:Enabled" value="true" /> in web.config suffices.

In Scott Hanselman’s wonderful talk at Mix, he demonstrated a simple little route tester I quickly put together. 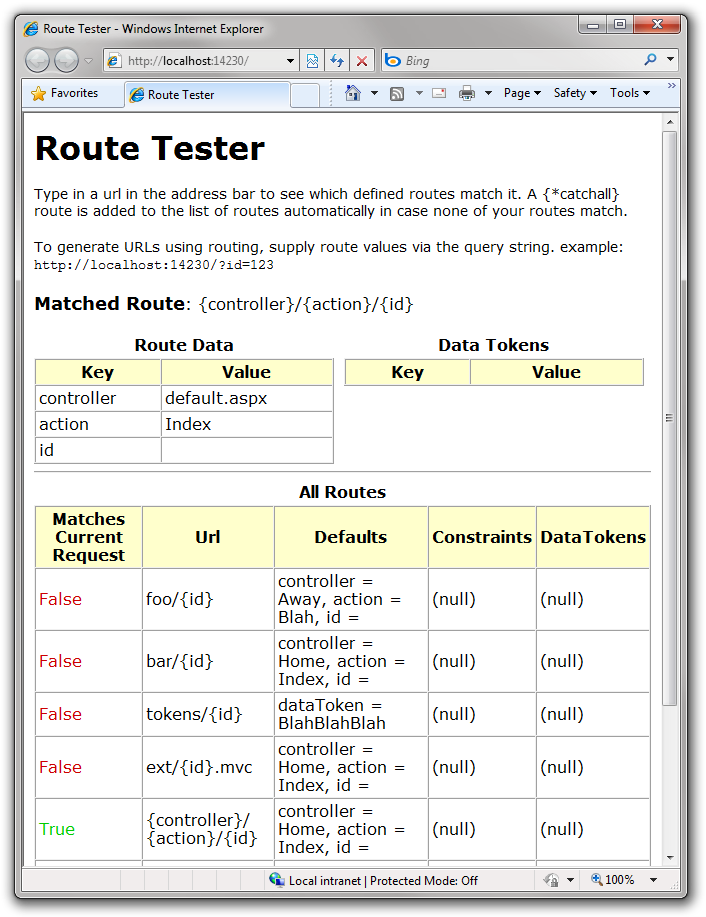 The reason this is useful is sometimes you expect one route to match, but another higher up the stack matches instead. This will show you that is happening. However, it doesn’t provide any information why that is happening. Hopefully we can do more to help that situation in the future.

To use this, simply download the following zip file and place the assembly inside of it into your bin folder. Then in your Global.asax.cs file add one line to the Application_Start method (in bold).

This will update the route handler (IRouteHandler) of all your routes to use a DebugRouteHandler instead of whichever route handler you had previously specified for the route. It also adds a catch-all route to the end to make sure that the debugger always matches any request for the application.

I’m also making available the full source (using the word full makes it sound like there’s a lot, but there’s not all that much) and a demo app that makes use of this route tester. Let me know if this ends up being useful or not for you.