Well today I turn old. 33 years old to be exact. A day after Hanselman turns really old. It seems I’m always following in that guy’s footsteps doesn’t it?

What’s interesting is that Rob Conery’s birthday was just a few days ago and we’re all recent hires and involved in MVC in some way. Ok, maybe that isn’t all that interesting after all as it is statistically insignificant, but I thought I’d mention it anyways.

Clustering is a natural occurrence in random sequences. In fact, when looking at a sequence in which there is no clustering, you’d pretty much know it wasn’t random. That’s often what happens when a human tries to make a sequence look random. The person will tend to spread things evenly out. But randomness typically forms clusters. Not only that, but people have a natural tendency to find patterns in sequences and phenomena that don’t exist. But I digress.

If you’re in the Seattle area this weekend, I’ll be speaking at the Seattle Code Camp. There are several speakers covering various aspects of ASP.NET MVC so I thought I would try not to overlap and maybe cover a bit of an introduction, a few techniques, and some Q & A.

In other words, I’m woefully unprepared because I’ve been so slammed trying to get a plan finalized for MVC that we can talk about. But I’m enlisting Rob’s help to put together some hopefully worthwhile demos. All I really need to do is get a designer involved to make something shiny. ;)

In any case, it’s 2 AM, I need to retire for the evening. I leave you with this photo of my son after he got ahold of a pen while my wife wasn’t looking. It was a brief moment, but that’s all he needed to change his look. 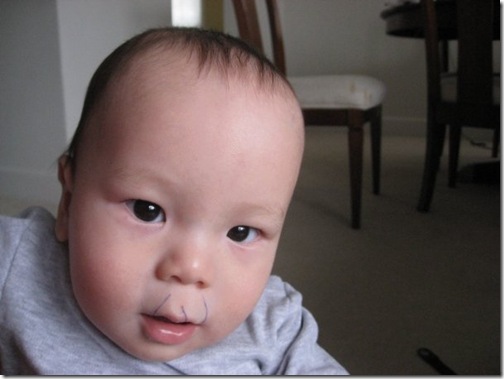