A while back, Jon Galloway asked the question, Can Operating Systems tell if they’re running in a Virtual Machine? What a silly question! When was the last time an Operating System questioned its own existence? Is that going to be in the next version of Windows - Windows Vista Into Its Own Soul? Or perhaps Apple will come out with Mac OS Existentialist?

Perhaps a more interesting question is whether or not you can tell that a web server is running in a virtual machine? Last weekend I migrated my blog into a virtual server running on a pretty sweet host machine and so far, my site seems to have gained an extra spring in its step.

Given that it’s hosted on the same server as that bandwidth hog, CodingHorror.com, I’m very pleased with the performance thus far. At least until he gets Dugged again.

In Jeff’s post, he mentioned that CrystalTech hooked us up with a beefy 64-bit dedicated server. Several commenters noted that there was no 64-bit offering on their site. The reason is that they hadn’t received much demand for 64-bit servers until we came along with our bullying tactics. 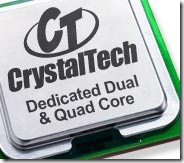 Through a contact over there, I wanted to see if we could work out a hosting deal. Jeff was adamant that we get a 64-bit server, which they didn’t have at the time, but could certainly order. I pretty much didn’t want them to go through all that trouble and was ready to move on, but they insisted it was not a big deal.

They …er…understated their case. Rather than simply build a single 64-bit server, they took this as an opportunity to build out a whole new product offering of 64 bit dedicated servers.

So what started off as me trying to scam some discounted or free hosting ended up spurring these guys to start a new product offering. Nice!

I’m now hosting this site and SubtextProject.com on this box, but our CCNET server is still in a virtual machine hosted generously by Eric Kemp of Subsonic fame.

I used to be skeptical of hosting my site in a virtual machine, as I felt like if I hosted closer to the metal, I could wring out extra performance. But let’s get real here, I’m not taxing this machine in any way.

I’m sold on the benefits and convenience of virtualization.