Pop quiz for you C# developers out there. Will the following code compile?

If you had asked me that yesterday, I would have said hell no. You can’t override an internal method in another assembly.

Of course, I would have been WRONG!

Well the truth of the matter is, I was wrong. This came up in an internal discussion in which I was unfairly complaining that certain methods I needed to override were internal. In fact, they were protected internal. Doesn’t that mean that the method is both protected and internal?

Had I simply tried to override them, I would have learned that my assumption was wrong. For the record… 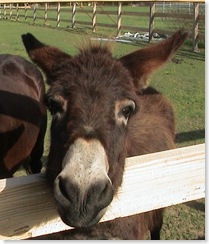 As the old saying goes, when you assume, you make an ass out of u and me. I never understood this saying because when I assume, I only make an ass of me. I really think the word should simply be assme. As in…

Never assme something won’t work without at least trying it.

UPDATE: Eilon, sent me an email to point out that…

BTW the CLR does have the notion of ProtectedANDInternal, but C# has no syntax to specify it. If you look at the CLR’s System.Reflection.MethodAttributes enum you’ll see both FamANDAssem as well as FamORAssem (“Family” is the CLR’s term for C#’s protected and “Assem” is C#’s internal).

If you don’t know Eilon, he’s a freaking sharp developer I get to work with on the MVC project and was the one who kindly disabused me of my ignorance on this subject. He keeps a blog at http://weblogs.asp.net/leftslipper/.

Apparently he’s the one with the clever idea of using a C# 3.0 anonymous type as a dictionary, that many of you saw in ScottGu’s ALT.NET Conference talk. Very cool.