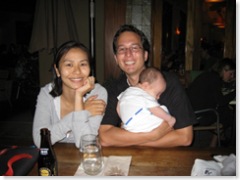 Today my wife and I celebrate our fifth anniversary of being legally married. If you’ve read my blog long enough, you might have seen this post which suggests we were married June 14, not September 12.

Ok perhaps the term secret marriage is a bit too strong. But it sounds cool, doesn’t it? The story is that at the time, my wife wanted to take a long trip back to Japan before our planned wedding. Unfortunately, with the tightening up of immigration following September 11, we were concerned she’d have trouble coming back. So we got legally married at the Beverly Hills Courthouse to make sure she could return.

Recently we decided to follow the DRY principle (Don’t Repeat Yourself) and only really celebrate our legal anniversary, as it keeps it simple for me.

Hard enough for a guy to remember one anniversary much less two!

So to Akumi (yes, she actually reads my blog), Happy Anniversary. I love you very much! And I was going to post that other silly pic of you we found, but I want to live to see the next five years of our life together.