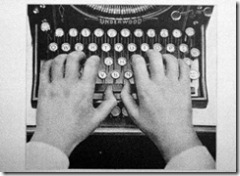 One thing that never gets old is when someone visits me and asks to check some email on my computer.

I always smile and gracefully hand over the keyboard and watch as nothing but gibberish pours onto the screen. This totally freaked out Jeff Atwood (ok, freak may be too strong a word, but allow me some dramatic license) as he watched in disbelief as I demonstrated my ability to tap on all the wrong keys, but see the right words show up on the screen.

What keeps it interesting is that I type on a physical QWERTY keyboard, but use the Dvorak keyboard layout by switching my Input Language setting within the Regional and Language Control Panel applet. This explains why it looks like I tap the wrong keys if you watch me type.

I switched to Dvorak over five years ago as one of several desperate measures I took to attempt to reduce the pain of coding. As I wrote recently, your fingers travel roughly 16 miles in an average eight-hour workday.

At the time, I believed the prevailing idea that the QWERTY layout was specifically designed to reduce coding speed because typewriters used to jam if people typed too quickly. As the Freakonomics blog points out, there’s a continuing dispute on whether or not this is urban legend or in fact true.

The theory behind Dvorak is that the keys are supposed to be arranged in such a way that letters that occur with higher frequency in the English language are on the home row and under stronger fingers. For example, the letter e is under the left middle finger.

The goal is that your fingers would travel less during the course of typing, ideally reducing occurrences of repetitive stress injury, while also increasing typing speed and comfort.

Does it succeed? Hard to say. Personally, I think there’s a law of unintended consequences at work here. If you can type faster with this layout, and you still work 8 hours a day, doesn’t that mean that your fingers might end up traveling just as much?

At the very least it does mean your fingers pound on more keys during the day. So if your keyboard doesn’t have a light touch, it could end up being more painful. I use the GoldTouch keyboard which I find to have a light touch, but not too light. In the end, what probably helped more than switching to Dvorak was that I started taking more breaks to stretch. Typing less is a sure way to reduce the stress of typing.

While learning Dvorak, I had to try and totally give into it, which meant my productivity dived for a short while. Fortunately, it was a slow time at work and only took me a couple of weeks to get up to a decent speed.

Since typing is all about muscle memory, one thing I experimented with was trying to type in QWERTY on Macs, and Dvorak on Windows. I wondered if it would be possible for me to associate QWERTY with the Mac and retain my ability to type in QWERTY when on a Mac.

Well, it kinda worked. I can still touch type QWERTY, but at about 60% of my former speed.