I don’t know about you, but every company I’ve ever worked at had a Fort Knox like system in place for deploying code to the production server. Typically, deployment looks something like this (some with more steps, some with less):

Interestingly enough, many of these companies didn’t have the same procedures for other documents and systems used to run the business. For example, one could in theory login to their CMS system and change the home page of the site to contain every expletive in the book just for fun and it would show up immediately. 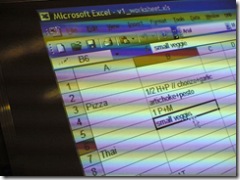 There are a lot of people who want to make it so that the business user can write code by connecting legos. The typical examples include dynamic rules engines and their ilk. Yeah, let’s let Joe the finance guy tweak the rules on the rules engine on the fly by drawing lines and connecting boxes.

The problem with approaches like this is that it ignores the fact that the effect of these changes is no different than writing code, but often with much fewer checks on quality before it gets deployed to where it can do damage.

These systems often are lacking:

A recent report (via Reddit) illustrates this point with a list of news stories on how errors in spreadsheets have cost businesses millions of dollars. A couple of telling snippets (emphasis mine). This one on the lack of version control and auditing:

http://www.namibian.com.na/2005/October/national/05E0F49179.html
The Agricultural Bank of Namibia (Agribank) is teetering on the edge of bankruptcy. “There is no system of control on which the auditors can rely nor were there satisfactory auditing procedures that could be performed to obtain reasonable assurance that the provision for doubtful debts is adequate and valid,” note the auditors. Auditors found that its loan amount to the now defunct !Uri !Khubis abattoir changed from N$59,5 million on one spreadsheet to N$50,4 million on another, while the total arrears was decreased from a whopping N$9,8 million to only N$710 000.

And this one on the lack of training and Quality Assurance.

Only a matter of time before the spreadsheets hit the fan

The solution is not to make programming more like the way business users work now. The solution is to apply the lessons learned from software development into other business processes.

In the same way that companies rely on heavily trained developers and rigid deployment procedures in place for code, companies should make sure their business people are just as heavily trained in the software they use on a day to day basis. After all, million dollar decisions are based on the content of these systems daily.

For example, spreadsheets should be version controlled. Changes to rules within a rules engine should have to pass some automated tests and manual QA before being deployed. All of these should be peer reviewed.