This just in. CodePlex is planning to roll out TortoiseSVN support! 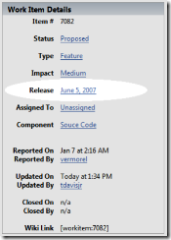 A little while ago I wrote a comparison of TFS vs Subversion for Open Source projects. I’ll spare you the suspense by telling you that Subversion wins hands down, primarily because it itself is open source and is designed with open source in mind.

It turned out that there was already a work item for SVN support and it was the highest vote getter. On Friday, Jim Newkirk commented within the work item that they are adding support for TortoiseSVN. You can see in the work Item Details (click to enlarge) that it is set to release on June 5, 2007.

Jim’s comment mentions TortoiseSVN support specifically, but I assumed he meant Subversion support. Unless they are building some sort of Subversion bridge to TFS.

As I wrote in a recent post, there appears to be two camps at Microsoft in regards to Open Source - the old guard who are threatened by it, and the new guard who are embracing it as the opportunity it really is for Microsoft. CodePlex is emblematic of the new guard. They are listening to their users and building something that really will benefit the .NET OSS community. My heartfelt kudos to the CodePlex team!

Now it’s time for me to approach the rest of the Subtext devs to talk about a potential move after June 5. Of course, being pragmatic. I’ll want to test it out first. Kick the tires before making any commitments.

UPDATE: It looks like the CodePlex team has created a Subversion bridge to TFS. In other words, from the outside, it looks just like Subversion so you can connect using TortoiseSVN and SVN.exe, but under the hood, it is TFS. Technologically speaking, that sounds pretty cool. It couldn’t have been trivial. However, I’m a bit skeptical it will have (and maintain) feature parity, but I’m looking forward to trying it out. Not exactly what I hoped for, but I won’t sit around and bitch about it if it works.