Thought I’d post a few pics from mix with some notes. 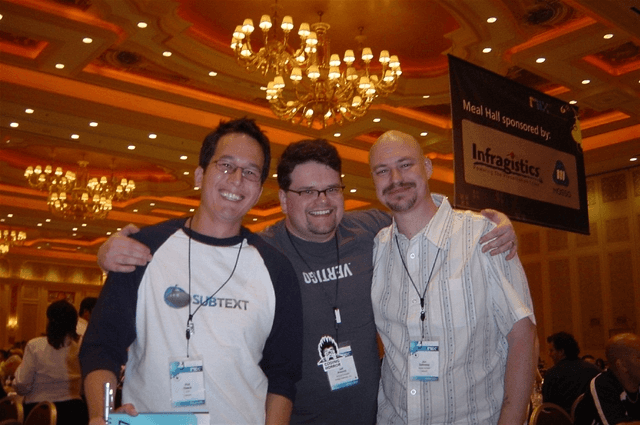 This first one is of the three amigos, not to mention coauthors. That is me on the left sporting a Subtext shirt, Jeff Atwood in the middle, complete with CodingHorror sticker, and Jon Galloway on the right. 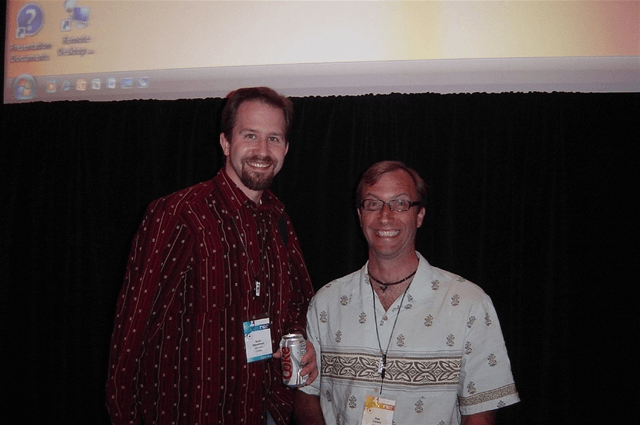 That’s Scott Hanselman (who runs that other .NET open source blog engine) on the left and Rob Conery (of Subsonic fame) on the right. The joke here is that Scott is standing on some stairs because Rob Conery is a giant. 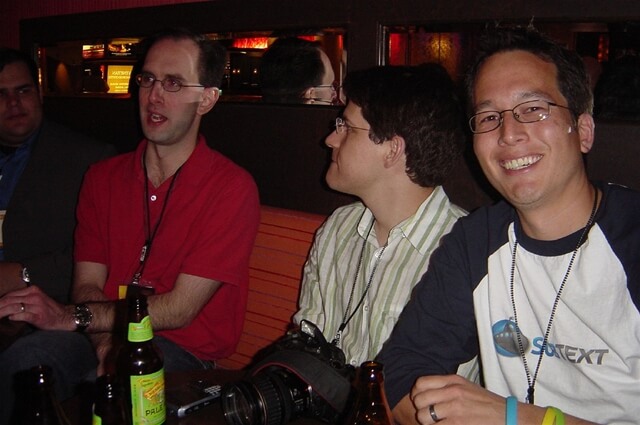 Sometimes, the best parts of conferences are outside of the sessions. A few of us were sitting around having drinks when we spotted Scott Guthrie walking by. Not content to just let him be on his merry way, as that would be the polite thing to do. We called him over and he proceeded to regale us with stories and walked us through some of the namespaces and such of Silverlight.

ScottGu, as he is known, is a total class act and I was happy to finally meet him in person. 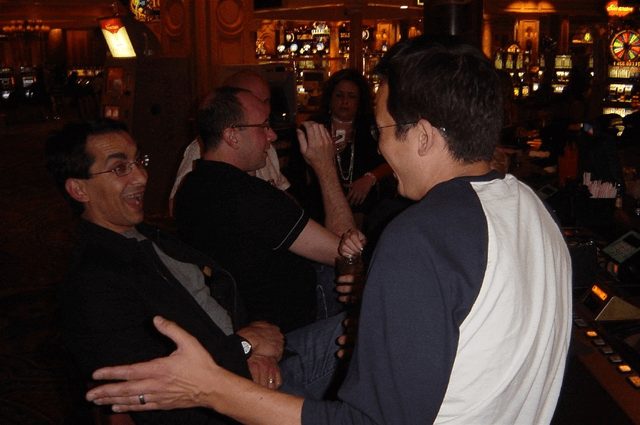 Here I am regaling Sam Ramji with an obviously hilarious joke. The picture is not, you know, staged whatsoever. No, not at all.

Sam’s is Director of Platform Technology Strategy and runs the Open Source Software Lab at Microsoft. Didn’t know there was someone in charge of Open Source at Microsoft? Neither did I until meeting him. A few of us had his ear during a dinner. Hopefully we’ll see some interesting things come out of it. 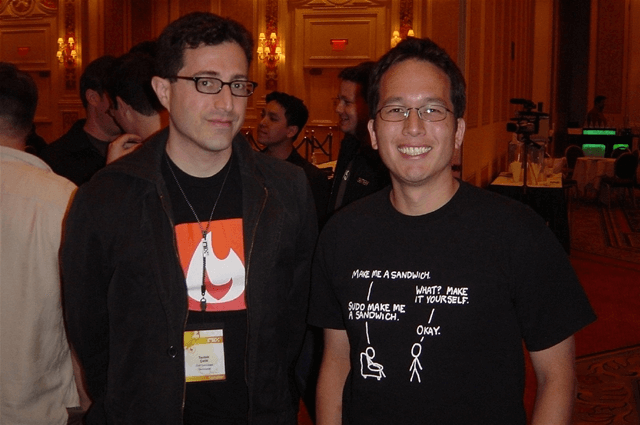 Tantek Çelik was walking by and noticed my XKCD t-shirt which sports a unix joke and had to take a picture. Not many people got the joke. 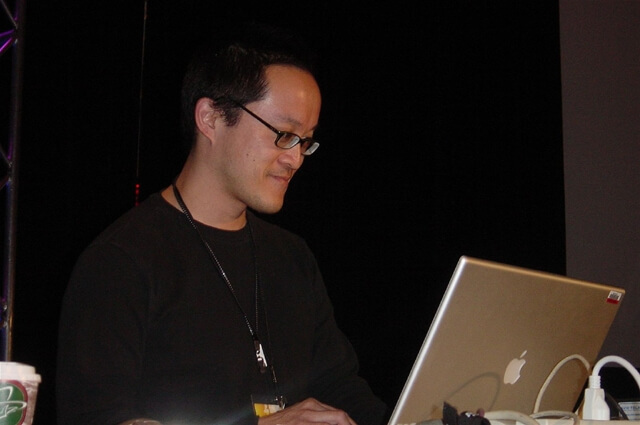 John Lam prepares for the Dynamic Language Runtime session with Jim Hugunin. This was one of my favorite sessions. One of the demonstrations was an application that allowed them to evaluate script dynamically using Silverlight. The neat part was they could switch languages, for example from Ruby to Python, and still evaluate properties of objects they had declared in the previous language. Hot!

I got a chance to hang out more with John more at Pure and really enjoyed his perspective on Microsoft and child rearing. 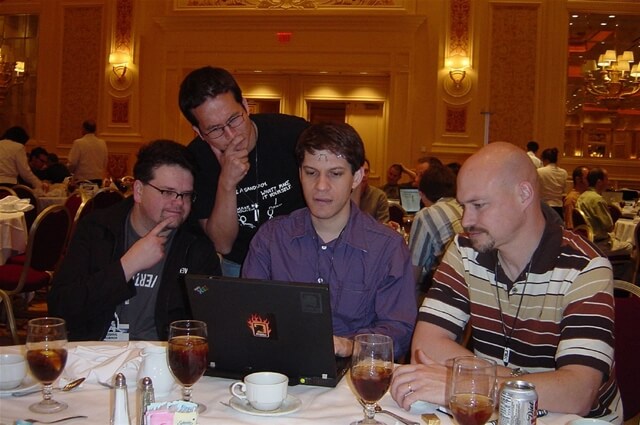 Jeff, Jon, and I intently watch as Miguel de Icaza gives us a demo of Mono. The rotating cube desktop is pretty sweet. 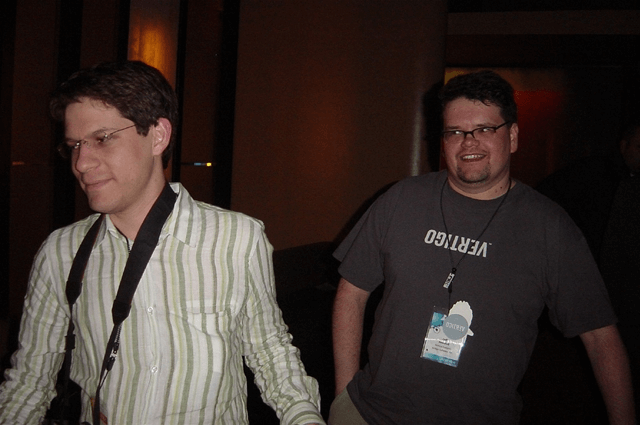 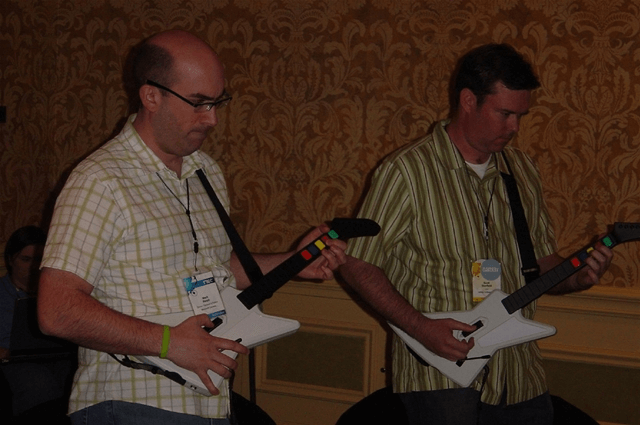 Scott Stanfield, CEO of Vertigo, on the right playing Guitar Hero, the addict. Tonight he and I cleaned up at Spanish 21, winning over $300 each. This surprised the guy at the craps table who informed us that Spanish 21 is a terrible game in terms of odds. But aren’t they all?